No Rest For The Weary

Share All sharing options for: No Rest For The Weary 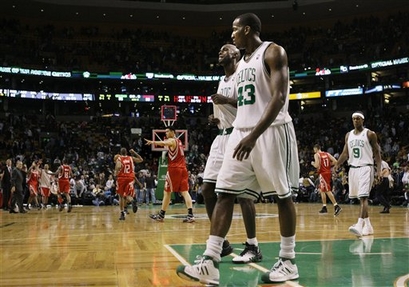 Yesterday we tried coming up with all the different reasons why this team is struggling.  Nobody knows for sure except the guys on the floor (and maybe they don't know either) but they sure look tired.  They just don't have that same swagger that they had early in the year.

When you get tired, you get sloppy.  When you are weary, sometimes you can put together an effort for a stretch (like last night's solid first quarter), but eventually it catches up with you.  Lately the team has been hitting a wall in the forth quarter.  From the Globe:

The Year of the Celtic seems like a fading memory as the team's trademark strong finishes have turned into late-game collapses, a reversal of form as well as fortune. The Celtics also squandered late chances in a 114-106 overtime defeat in Charlotte Tuesday, continuing a trend that began with a Dec. 25 loss to the Lakers, the start of a road trip that broke not only the Celtics' 19-game winning streak but also their spell on the opposition.

And don't talk to me about the offense because I don't want to hear it.  This team's identity is based on defense first and foremost.  When we play defense the way we can, we win.  Simple as that.  All the other issues this team has (lack of depth, turnovers, etc.) are still there in the wins.  They just don't matter because the defense more than makes up for them.

"Right now, our defense is not getting the job done," Pierce said. "That's one of the first things we talk about. That's the type of team we are, and when we don't defend, it doesn't allow us to get out and run the break. We're not causing turnovers like we want to. You can defend us in the half-court and get us into a slowdown game, which we can play. But our goal is go out there and shut things down. We are allowing too much dribble penetration. I told the guys we need to get our defensive swagger back. It's been broke these last 10 or 12 days. We know what we're capable of - it's just about going back to the basics and doing what we do.

Of course to play defense you need to have the energy to do it properly.

This team needs a rest and it isn't coming anytime soon.  The All Star break is a month away.  Maybe they can get some rest next week, but not before they face the Cavs tomorrow and a back-to-back home/away with the Raps.

That's the challenge of an NBA season though.  To use a cliche: It is a marathon, not a sprint.  There's plenty of time to get this turned around again to finish the season on a strong note.  I just wish they could get a few more days off to get their groove back sooner rather than later.