Do you know what else wins championships? Rebounding

Share All sharing options for: Do you know what else wins championships? Rebounding

I had a stats class at the start of my MBA program.   There was a final project in the class where each student had to pick a topic and create a statistical model.   My topic - what are the characteristics of a winning NBA team?   It turned out that rebounding was the most important quality in a championship team.   The intuition behind this was rather simple to me, more rebounds creates more possessions for you and less for the opponent, and therefore will lead to more points and wins.

Last night the Atlanta Hawks dominated the glass, out-rebounding the Celtics by 16 boards (47 to 29), including 16 offensive boards (to the Celtics 6).  It seemed that there were some rotation issues that resulted in the Hawks, particularly fan favorite ZaZa Pachulia, getting a few cheap offensive boards.  Wednesday night, the Celtics were out-rebounded the Jazz by six, and importantly the Jazz also collected 17 offensive rebounds.

So why are the Celtics under performing on the glass this season?

Looking at the individual rebounding numbers (total rebound percentages for ease of comparison), a couple of points jump out. 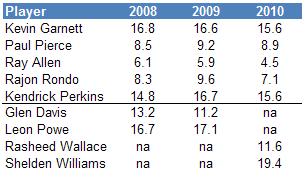 (all stats from basketball-reference.com)

Garnett is roughly 1% point behind his typical pace and Rajon is roughly 2% behind his production.   Hopefully Kevin is still working his way back from the knee injury and that rate will increase over time, however Rajon's stats are tougher to explain.    On the bench side Rasheed and Shelden are basically replacing the production of Glen Davis and Leon Powe.

So maybe the comparative under performance from KG and Rajon are what is causing the Celtics to slip down the league rankings, or maybe the poor rebounding numbers are an artifact of a small sample size and some flukey plays.   Either way, Doc & the staff should be concerned and hopefully are working on a way to remedy this situation starting tonight - against a solid rebounding team in the Indiana Pacers.