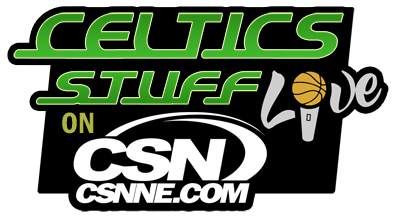 Celtics Stuff Live grabbed legendary Celtics play by play man, Mike Gorman, before hitting the sights and sounds of Beale Street as the Celtics prepared to face the Memphis Grizzlies on Monday night. Since Mike had not been on the program since Training Camp, Jon and Justin took a look back through the early weeks of this season and caputred Mike's opinions on the Celtics turnaround. In particular, talk zeroed in on the play of Eddie House and his increased and amended role in the aftermath of Marquise Daniels thumb injury. Justin had a few opportunities to bask in the strong glow of Kendrick Perkins' great start and you can imagine Jon's thoughts as Mike effusively praised a certain former Kentucky point guard.

Just before wrapping up the show, Jon asked Mike his thoughts on Lebron James' "RiverdanceGate" and his response was two fold: it was "immature" and the Cavs are beatable.

Sounds good in this corner.