In Case Of Emergency

Share All sharing options for: In Case Of Emergency 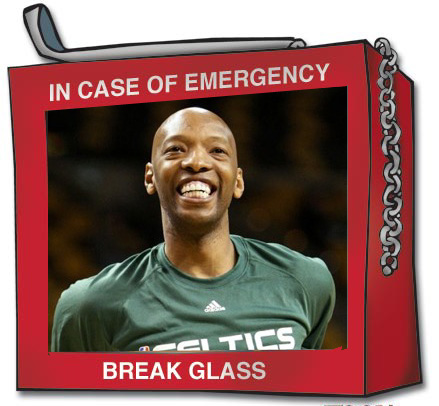 In case anyone has forgotten, Sam Cassell is still on the Celtics roster.  I wasn't exactly sure why he was signed at the end of the offseason.  In fact, it almost seemed like he invited himself to camp and just never left.

In reality, the team must have had a plan for him all along.  They cut Darius Miles (who ended up on his feet in Memphis) in order to keep Sam-I-Am on the roster.  He has talked openly about becoming an assistant coach after this year.  By all accounts he's a great locker room guy who speaks with the authority of a three time NBA champ.  But there has to be something more to it.  He hasn't played a minute yet this season, but he's taking up a roster spot for a reason.

The reason must be that the team is holding on to him as a last resort backup plan.

Plan A was to see if a rotation of Rondo, Eddie House, and Gabe Pruitt could handle the point guard duties.  Rondo has held up his end.  Eddie hasn't been bad by any means, but everyone from Doc on down admits that Eddie thrives playing off the ball where he can spot up and shoot instead of setting up the offense.

Gabe Pruitt was given some burn for a few weeks while Tony was out and he played alright.  Not great, not bad.  A little inconsistent, but the peaks and valleys were not as pronounced as someone like Tony.

Allen just went down with another injury and it isn't clear when he's coming back.  We'll likely get to see Gabe "freed" for a little longer. Which is actually good timing because the team likely needs a little bit more time to evaluate what Gabe can give the team for the stretch run.

We have about a week left till the trading deadline is upon us. I still don't see anything happening before then, but I'm convinced something will happen after the deadline in terms of a free agent pickup.  A lot depends on who becomes available, but I think Gabe is still a critical piece in what we do with Sam Cassell going forward.

If Gabe can step up his game and really win that backup PG position, then the team might feel better about picking up a big man and handing Sam a clipboard.  If he can't, then we need to think about activating Sam for the last couple months to get him into a flow with the rest of the team in time for the playoffs.

That means if we pick any free agents up, we'll have to cut someone else.  That could mean bad news for Patrick O'Bryant.  He's still got talent, but he's unlikely to help the team any time soon.  There's only so much room on a title contender's roster for projects.

Of course the team could pick up a couple of free agents and remove Patrick and Sam from the roster.  There are any number of scenarios that could play out in terms of personnel and it will be very interesting to see what Danny does this month.

The good news is that Ainge does have a backup plan in place in Sam Cassell.  He's not perfect, and he's too old to be considered a missing piece kind of guy.  But he's a better option than a lot of the guys that are out there.  He knows the system and he's already got chemistry with the guys on the team.

If all else fails, it is a nice option to have him on board.