Share All sharing options for: Sam Still An Option 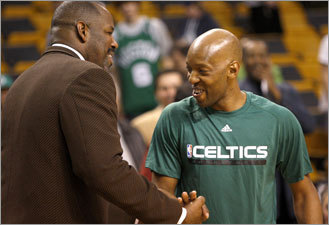 By now you have heard that the Celtics have agreed to trade Sam Cassell and cash for a "heavily protected" 2nd round pick.  Note: The deal isn't done yet, and there are still details to work out, but the Sac Bee is confirming the story.

It is safe to say that Danny is setting the table for something else to happen.  What that is, nobody knows.  Maybe Danny doesn't even know yet.

If I had to guess, I would say that this is actually another flexibility move.  Danny wants to keep as many options open as he can.

I can't imagine that this is purely a financial move for the Celtics.  Yes, this takes what is left of Sam's salary off the books for luxury tax consideration, but we also paid Sacramento to take on that salary.  I would imagine that the dollars saved vs. spent are either a net loss or close enough to a wash to not matter much.

Obviously opening up a roster spot allows Danny to pick up any free agent that shakes out after the trade deadline on Thursday.  I've got my fingers crossed for Joe Smith but I'll be eagerly watching the wire to see what else might pop up.

However, if nothing reasonable becomes available, I think Sam Cassell could still be an option.  I really doubt Sam is in the Kings plans, so it is reasonable to assume that he'll be waived.  As long as he's waived before March 1st, we can still pick him up for the stretch run.  We just have to wait 30 days to do it.  See the rules here:

If a player is waived after March 1, he is ineligible to be included in the playoff roster of any team that signs him for the remainder of that season.

So say that Sam gets officially traded and waived by Feb. 20.  That means he's eligible to return to the Celtics on March 20.  That gives Danny a whole month to try to find a better option on the waiver wire.  If he comes up empty, he can still pick up Sam.  At that point in the season we'll still have 13 games left to shake off the cobwebs and work him into the rotation.

I wouldn't bank on much from that future 2nd rounder.  The term "heavily protected" seems to indicate that we'll never see that pick.  We may also never see Sam in a Celtics uniform again, but it is nice to know that we still have that option.

Roy Hobbes is smarter than I am with the finances, so I'll quote him on the particulars here (which I pulled from the comments below):

While Sam has a contract for around $1.2 million, the team is only paying him $797,581; the league subsidizes the rest for veteran salaries. As of right now, the team is through 63.4% of its schedule, and Sam has earned that amount of his salary. That means he’s owed approximately $291,798 for the rest of the season by whatever team is paying him.

Here’s where things get interesting. If the team was planning on bringing Sam back, financially this may make sense. If Sam stayed on the team the entire season, the Celts would have owed him roughly $1.6 million in salary plus luxury tax. If he comes back with roughly 20 games left, (and if and only if the league treated Sam like any other minimum-salaried player) the team would only owe him approximately $389,000 in salary plus luxury tax: ($797,581 * 20/82s, doubled). Thus, if their plan is to only have Sam play a limited number of games prior to the playoffs, this trade would allow them to do so, while getting them approximately $205,000 in savings after paying Sacramento off ($1.6 million combined salary pre-trade – $505,666 paid salary to date – $389,000 current luxury tax – $500,000 to Sacramento = $205,334).

This assumes that the league treats Sam as any other minimum salaried player the team adds for the stretch run, rather than viewing this as a means of circumventing the salary cap.