For Boston, The Party Starts After 3:00 PM

Share All sharing options for: For Boston, The Party Starts After 3:00 PM 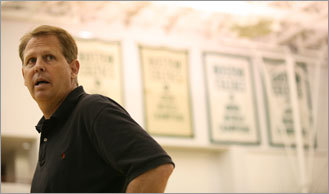 I've been predicting this for weeks, but it doesn't take Nostradamus to figure out what will happen here.  Ainge has admitted that he's trying to work something out, but nothing at all seems close.

"We’ll be on the phone right up until the end, but we feel like we’ve exhausted most of the things we’ve been talking about."

"Nothing, all quiet," Celtics president Danny Ainge said yesterday. "I'm not expecting anything. We've tried to do some deals, there is nothing that's worked that makes the math fit for teams. We're trying to do deals, we put some effort - nothing.

"I'm not even close to doing deals. There is nothing going on. I'll continue to talk over the next 24 hours. I'll talk with teams but nothing's there. It's an expiring contract, free agent situation - we don't have any of those."

So while things will most likely be quiet today, we all should be paying close attention to the deadline deals.  Once things cool down for the rest of the league, it could heat up for us pretty quickly.

Some factors in our favor today:

I'm actually pretty optimistic that the Celtics can land both Marbury and Joe Smith.  I would imagine in that scenario that Patrick O'Bryant would be waived (the 2nd year on his contract is not guaranteed, so the cap hit would be minimal).

I had been hesitant to endorse the need for a point guard, but with Tony's injury there's less depth at the guard position and we traded away our "break glass" option.  So adding a scorer off the bench that can distribute the ball sounds like a good option to me.  The concerns are still there about his head and his ability to pick up the system (in particular on defense) but the risk seems minimal.  If he doesn't work out, we can cut ties any time we want.

I'm not sure what our plan B options are at this point, but it will all become clearer after 3:00 PM today.