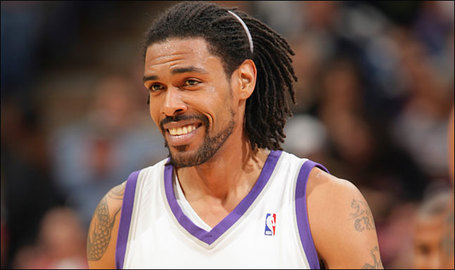 The Celtics are hoping to fill their need for a big man by winning the Mikki Moore sweepstakes.

Moore's agent, Mark Bartelstein, confirmed the team has offered the center a contract, and said several other teams have done the same thing, although he wouldn't divulge their names.

Moore is expected to make his decision today after clearing waivers and becoming an unrestricted free agent. "A lot of teams are very excited about him, so it's a tough decision for Mikki," said Bartelstein.

If Moore opts to go elsewhere, the Celtics would be interested in Oklahoma City center/forward Joe Smith if he is bought out of his contract. Smith is the more talented player, but there is a question whether he will be bought out or whether he even wants to be.

Not sure what to make of this rumor out of Cleveland:

The team has been in contact with forward Mikki Moore, who was waived by the Kings last week and is expected to clear waivers Monday. However, it is not believed the Cavs will seriously pursue Moore. Some league executive believe Moore is headed to the Boston Celtics as part of an arrangement tied to the Celtics sending the Kings Sam Cassell and cash in a trade last week.  It was somewhat surprising that Moore, who is owed $2 million by the Kings next season and could have been a trade asset over the summer, was waived. That has led some to speculate.

Wages of Wins has a post talking about the Kings bad singings and talks about Moore.  Of course, as TrueHoop points out "it all comes down to how much you pay him."

Perhaps no player exemplifies this point more than Mikki Moore. For most of his career, Moore was the quintessential journeyman.  He was good enough to make an NBA roster.   But never good enough to last or make much of a contribution.  Then two years ago he was in the right place at the right time.  The New Jersey Nets lost Nenad Krstic for the season and Moore was suddenly given the gift of playing time.  Although his per-minute performance was essentially unchanged - a point I made in July of 2007 - Moore’s increased playing time led to an increase in his per-game numbers.  Consequently, the Kings decided to give Moore - a player who has labored under a 10-day contract in the NBA — $18 million.

This year Moore - who is now 33 years old - saw his productivity decline further.  As a consequence, the Kings put him the trade market.  But after no one stepped forward to take on this contract, the Kings simply cut Moore from the team.  Yes this move saves money.  But the Kings could have saved even more money if they hadn’t agreed to give Moore this contract in the first place.