You know the sound that Krusty the Clown makes when he gets bad news?  "AAAARGH!"  Yeah, that sound.  That's what went through my head when I read the following lines.

I was going to ask Tom Ziller (Kings blogger extrordinare) for a scouting report on Mikki Moore if we signed him, but he beat me to the punch.  Here's what he had to say:

Art Thompson III of the Orange County Register suggests that Moore could "duplicate or at least come close to providing the type of production that P.J. Brown supplied."

I like Mikki, and he's a great teammate. I will miss rooting for him more than any of the other five players the Kings traded or waived last week. But anyone expecting salvation in the form of this dude is in for great a surprise.

Moore is, and has been, among the worst rebounders in the league at the power forward position ... never mind center. He's Mark Blount bad in this area of the game. MARK. BLOUNT.

Moore has springs in his legs, but he does not block shots (6'6 Francisco Garcia had more per-minute last season). He can do three things well: take charges (though he'll also rack up a ton of fouls trying to get those), hit the elbow jumper and finish at the rim, provided the ball is handed off to him within five feet of the basket and there are no defenders within 10 feet.

Moore has an amazing story, with a one-in-a-million work ethic and a heart of solid gold. I'm a huge fan of Moore, The Man. So if a team like Boston wants to had him in order to help the youngsters stay motivated, to add 2.3 guttural screams per game, to boost the dreadlock/frightening tattoo quotient ... by all means, do it. But don't think Mikki will come in and be another P.J. Brown. That is not this dude. 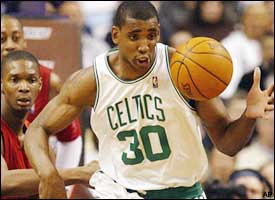 In related news: The Herald is reporting that this is just about a done deal.  He has to clear waivers (should be Tues. morning) and everyone denies anything is solid, but sources say he'll pick the Celtics.  The Globe quotes Moore's agent and says that nothing has been agreed to, and Moore should make a decision tomorrow.