Are We Better Now?

Share All sharing options for: Are We Better Now? 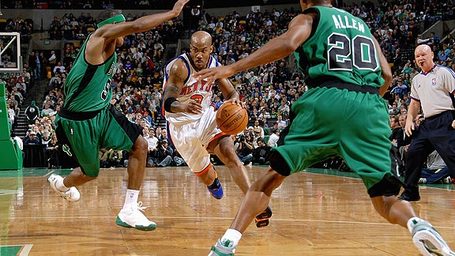 Forget the trade deadline.  Forget the courtroom drama.  Forget Joe Smith.  Forget (for now) the offseason.  All that matters right now boils down to this:  Are the Boston Celtics better today (or technically the end of the week) than they were a couple days ago?  I say absolutely, yes.

Lets go to the tale of the tape:

Is Marbury a step up from Sam Cassell?  I should think so.  He's younger, had more talent in his prime, and one would have to assume that he's got more left in the tank now (though we can hardly tell since neither one has played this year).  Don't forget that Sam Cassell had a reputation of being a locker room malcontent in some of his other stops before finding peace in the land of Ubuntu.  If Marbury can find that same peace, he is an upgrade.

Next, is Mikki Moore better than Patrick O'Bryant?  Come on now.

So I believe we are better than we were a few days ago.  Unfortunatly that doesn't mean we are as good as we were when we won the title in June.  Mikki Moore, as Tom Ziller pointed out, is no PJ Brown.  Stephon Marbury doesn't replace the contributions that James Posey brought to the table.  So strictly from a +/- personel standpoint, we are at a net loss.

The wild card is the vast improvement of Rajon Rondo's game.  He has gone from being a talented but streaky young player to being a near All Star in less than a year.  At this point he's just as important as the Big Three to winning games.

So perhaps the fundamental question I'm debating here is somewhat flawed.  Maybe we are better than we were a couple days ago.  It isn't clear if we are as good as we were in June.  All that really matters is "can we win the title this year?"

This team clearly has a Championship caliber starting five.  The questions all surround the bench.  While the second unit has had its moments of brilliance, I think most would agree that there was room for improvement.

Eddie House has to play the off guard spot to be the sniper that we all know and love.  Gabe Pruitt is making strides, but still looks like a rookie too much of the time (especially for a 2nd year guy).  Tony Allen was all over the map when healthy and now is on the shelf at least till the playoffs.

The backcourt needed someone that could take the pressure off Eddie House to initiate the offense and they needed someone to create his own offense (without Tony dribbling it off his knee).  Marbury can do both of those things.

The worry is that he might not be able to pick up the defensive rotations.  He's never been known to be a defender and while Tom Thibodeau's schemes have made Ray Allen a capable defender, there's only so much a system can do.  Also, have to wonder if Marbury is going to really initiate the offense or if he's going to pound the ball into the floor and hoist an off balance, contested shot from 20 feet every other play.  You know, like Sam did last year.

I have my reservations and worries, but in this case his talent wins out.  If he can buy in to what we're doing here, he'll be a big, big help.  If he doesn't, then we can cut him loose and forget about him.  In my opinion he's worth the gamble.

Leon Powe and Glen Davis seemed to take turns stepping up while the other wasn't playing well.  The problem is that we had a thin big man bench and had to play both together too much.  They also both lack a certain trait that usually is a prerequisite to playing in the post, height.  It seems like you have to qualify praise given to them.  "They do remarkably well, ...for undersized power forwards."  Scalabrine has had a great year and has filled in remarkably well, but he too is struggling with injuries.

Adding Mikki Moore finally gives us someone with length.  That length is discounted a bit when you consider the fact that he's not considered a very good rebounder or shot blocker.  However, you have to like the fact that he's a high energy guy.  I have a feeling that he's going to fit in very nicely to Thibodeau's schemes.  In fact, I could see him backing up KG (when he comes back) more than he does Perkins.

It doesn't matter if he's better than Powe or Davis because our big man bench is paper thin (especially with Scal out for the time being).  You can rotate all these guys into the lineup depending on matchups.

Doc Rivers and his staff now have more tools at their disposal.  How they utilize those tools will go a long way to answering all the questions surrounding the team.  Doc has done a masterful job blending all the huge personalities on this squad into a Championship team.

He's now got the responsibility to do that with two new personalities.  He's also got to figure out how each guy fits into the offensive and defensive schemes and maximize their strengths while minimizing their shortcomings.  If he can do that, then we've got ourselves a great chance to repeat.

Bonus Archive Link:  By the way, my specific thoughts on Marbury haven't changed all that much from this post from early January.  Are You Ready To Get Nuts?