The Moore Era Kicks off in LA with a Loss

Share All sharing options for: The Moore Era Kicks off in LA with a Loss 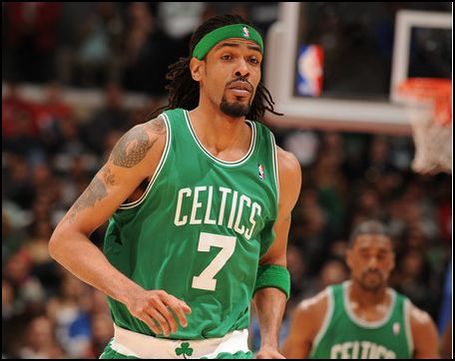 This had all the makings of a trap game loss or a sleepwalk win.    The Celtics looked very much like a team that was finishing the longest road trip of the year, and go home with a loss.

New addition Mikki Moore saw extended minutes tonight and displayed nice range from 15 to 20 feet early on.  Otherwise, this was basically Mikki's first practice.  Actually a Celtics practice is probably more intense, but you get the point.   He ran around, set some screens and unleashed a catch phrase you could hear on TV while battling for boards - "Stay With It."

Otherwise, this was a snoooozer.  Rajon did shoot from the outside quite a bit tonight and confidently knocked down a nice rhythm three pointer that wasn't an end-of-the-shot-clock chuck.   Big Baby continued to shoot very very well from the outside, but also had a few mistakes on offense, and missed a key jumper with about a minute to go.  Glen also got the start in place of Scal, who had been starting for KG.

Paul had some hand problems in the second half, apparently dislocating his thumb early in the third.   The Clippers TV feed was nice enough to show an extended shot of Eddie Lacerte putting the thumb back into the socket.

This was tied with 5 minutes to go in the fourth.    Let's just say, it wasn't the best defensive effort we've seen from the Celtics this year.   At times Mardy Collins (yeah he's still in the league, I was surprised too) looked like Lebron with a handful of physical drives into the lane.   Then Paul realized that Mardy can't shoot and backed off him.   Fred Jones, another surprise name, also played a pretty big role for the Clippers.    What killed the Celtics down the stretch was very, very poor free throw shooting from Paul and Rajon (3-6 on clutch freebies in the last few minutes) with a lucky airball from Collins falling right into the hands of Randolph for the winning hoop.

I'd count this as the 1st real loss without KG (I can't count the Jazz loss, there was no way the refs were letting that one get away, and KG did play in the game if only for 8 minutes).