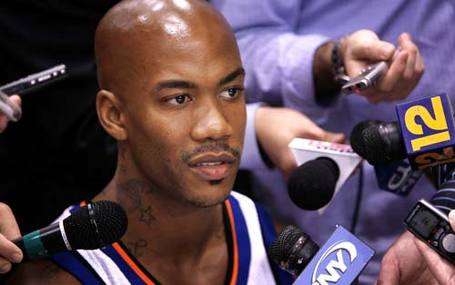 As a Celtics diehard, I have taken my fair share of pleasure in seeing your team flail about in mediocrity and turmoil.  It was never anything personal against Knick fans, just the whole rivalry thing between the teams.  But I'm long since over that.  I'm actually glad to see the Knicks turning things around.  You have an excellent coach, a GM who knows what he's doing, and an owner with deep pockets.  You have a future and I think that is great for the NBA as a whole.

But that's not why I'm writing to you.  I just wanted to tell you that I'm starting to understand a little bit of what you've been going through for the last several years.  I'm talking of course of the circus that surrounds Stephon Marbury.  Granted, I've only had a sample size bite so far and you've had an endless buffet line of this mess.  I still have some hope that things will quiet down once he gets on the court and helps us win some games.  But so far it has been absolutely nuts around here.

Keep in mind (as if you could forget), Stephon hasn't played a single game for anyone this year.  He hasn't even officially signed with the Celtics yet.  (Update: it appears that he officially signed this morning)  We've played 59 games without him and managed to maintain one of the best records in basketball.  Yet he's been one of the biggest ongoing stories of the season.  He's created a firestorm of media and fan attention this week.

Consider his quote in yesterday's paper announcing his intention to sign with the Celtics once he clears waivers.  We don't know what the exact question was but the writer framed his response as follows:

Asked about his role with the Celtics, presumably to back up guard Rajon Rondo, Marbury said, "I'll just let my game speak for itself."

The quote itself is innocuous enough.  Kind of a throwaway comment if anything.  But when several Celtics fans read it, their knee-jerk reaction was to assume that he was refusing to concede the starting job to Rondo.  Red flags shot up and indignation poured out.  "How DARE he???"  "Here we go!"  "See what I mean about him?"

This morning we have an interview with Marbury published in the Globe where he was asked directly about coming off the bench:

"I don't care what they ask me to do. I'll play 20 minutes or I'll play 15. It doesn't matter who is scoring or who is doing what. It's about one common goal: to win."

Who knows if he really believes it, but I think it is safe to say that fans overreacted to the original quote.  I expect it won't be the last time.

Boston has had some good success with reclamation projects over the years.  Randy Moss was a home run.  Corey Dillon worked out just fine.  Ricky Davis had mixed results on the court but the fans loved him.  But I'm beginning to wonder if Marbury has any shot of winning over this town.

Of course he has only himself to blame, as you know full well.  You don't become the poster-boy for dysfunctionality by being a choirboy.  He's made more than his share of stupid mistakes and selfish choices.  And he's done all that while appearing blissfully unaware or unconcerned by the wake that he creates.  But he's still got that talent.  And talent means always getting a second, third, and forth chance.

There's only one true cure for all that ails an athlete's reputation.  Winning.  Everyone loves a winner, even if he was a loser for his whole career before that.  And if we don't win, at the very least we'll have someone to blame.

So while I'll never know the full extent of what you New York fans have gone through, I'm starting to understand.

Take care and best of luck until our teams meet again,