Share All sharing options for: Marbury Deal Is Done 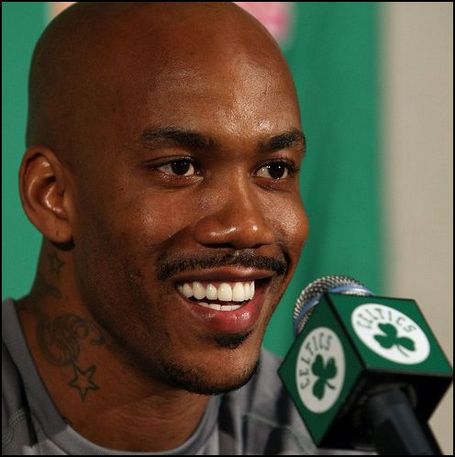 Update: The deal is done:

The two-time All-Star is now undergoing a physical and is expected to attend a closed practice at TD Banknorth Garden at 5 p.m. before tonight's game against Indiana.

It remains uncertain if Marbury will be in uniform tonight, but given that the Celtics have just 11 players in uniform, it's possible that they may need him to suit up in case of an emergency situation.

And we may have set a record for most posts about one guy in a 48 hour period.

Press Release after the break:

BOSTON - The Boston Celtics announced today that they have signed free agent guard Stephon Marbury. Per team policy, terms of the deal were not disclosed.

"We are very excited to have a player of Stephon's caliber joining our team. Our entire organization is confident in the belief that Stephon can play an important role in helping us to win another championship," said Danny Ainge, Celtics President of Basketball Operations.

Marbury, a 6'2", 205lb guard, is entering his 13th season in the NBA and has posted career averages of 19.7 points and 7.8 assists per game. The former Georgia Tech product is third among all active players in assists with 6,396. The two time All-Star has averaged 20 or more points in a season seven times and has averaged eight or more assists nine times. During his career, Marbury has finished in the NBA's top 5 in assists five times, and has finished in the top 10 nine times.