Share All sharing options for: The Starbury Era Begins 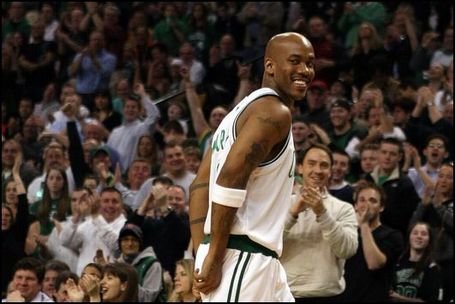 I think Doc handled Stephon's first action perfectly.  He knew that he had a real shortage of healthy bodies so he had an excuse to toss him out there right off the ba.  He had about an hour of shootaround time with the team under his belt.  Doc gave Marbury a "free pass" to make mistakes, so any rust can be at least partially attributed to that.

Marbury certainly looks like he's having fun.  The team broke into a mini-mosh pit during the pregame intros and Steph seemed to be smiling all night long.

Doc got him in right before the end of the quarter so the crowd had a chance to welcome him without distracting too much from the flow of the game.

When he actually got a chance to run up and down the court, he looked alright.  One of the first plays was a nifty pass off a pick and roll (Powe was fouled on the layup attempt).  Shortly after that he hit his first shot, a baseline jumper from 15 feet or so.

The downside (predictably) was his defense.  Rush shook free for several buckets leaving Marbury caught in screens.  One one play Steph and House rotated to the same player leaving Diener wide open for a three.  Clearly he'll need some time to pick up Thibodeau's defense.  He's never been much of a defender before, but neither was Ray, so maybe there's hope we can at least hide him on D for stretches.

As for the rest of the team, the first half was a bit lazy.  Ray and Rondo kept us in the game.  They didn't take it to the rim enough and let the Pacers go on a 10 - 0 run.  Chalk some of that up to the introduction of Marbury and Moore, but they can play better than that.  Hopefully they will in the 2nd half.

Better second half, in particular the run they went on early in the 4th.  They let the Pacers creep back into it, but were able to hold them off with some sloppy but barely clutch-enough play.

Stephon picked up his game quickly as well.  He used the pick and roll to spring open for a nice elbow jumper and drove to the basket for a couple of nice layups.  He seemed a little less lost on defense too (or maybe the other guys covered for him better).  Amazingly Doc inserted him on D for the final 20 seconds of the game.  He finished with 8 points, 2 assists, 3 turnovers, and a steal.  Not bad.

For his part, Rondo reminded us all why he's the starter and one of the best young talents in the game.  He had 17 assists headed into the 4th quarter and could have had more if not for a number of wasted shot opportunities by some of his teammates.  He seemed reluctant to shoot tonight, but his playmaking more than made up for it.

I thought Moore looked good for stretches as well.  Davis scored some clutch buckets and free throws down the stretch.  Pierce seemed a bit off - hopefully that thumb isn't going to bother him much longer.  Perkins continues to be our No-Stat-All-Star anchoring the defense all night long.

All in all it was a pretty sloppy game, but it was a solid start for Stephon's career in green. 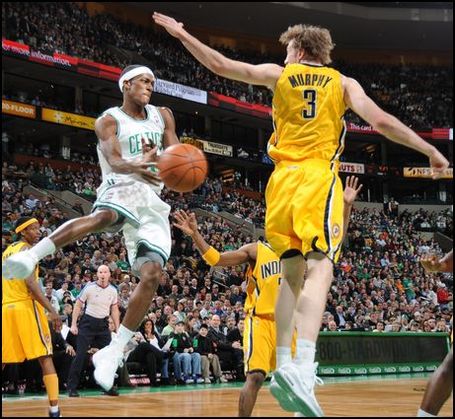