Share All sharing options for: Last Shot A Team Effort 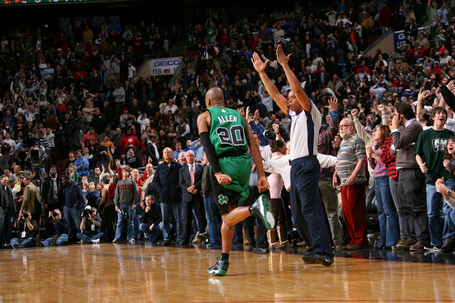 I am still reveling in that last second shot.  It isn't like it is the first we've seen, and it certainly isn't the first game winner Ray has hit for us.  It just felt like that game was going to slip away.  Even that last play looked like it was breaking down just a split second before he found the open Allen in the corner.

Reading the papers today, I think we can appreciate it even more.  Rich Thompson has an article detailing the thought process leading up to calling that play.  Doc drew up the play for Ray Allen, changed his mind, and then was talked out of changing his mind by Rondo, Ray, and Pierce.

"It was funny. Coaches think too much sometimes and that was the play I originally drew up," Rivers said. "When they called the 20-second (timeout), I changed the play.

"Then Rondo and Ray said they liked the first play and talked me into running the original play I drew up. Thank God they did."

First of all, I don' t know who the second play would have gone to, but it probably would have been Pierce.  So cheers to Pierce for believing in his teammate and for getting him the ball with just enough time to get the shot off without giving the other team any time to set up their own play.

Secondly, cheers to Doc Rivers for being flexible enough to listen to his players.  I heard an interview with Bill Russell once where he praised Red Auerbach for being wise enough to listen to what his players thought and letting them make adjustments that they saw needed to be made.  He said at times Red would just say "what do you guys think needs to be done? ...ok, do it."  Rivers has a veteran team with some real high basketball IQ guys.  He doesn't have a huge ego, thinking he knows better thant he players at all times.

So the players, who can pick up on things that might not be evident from the sideline, are free to give input and feedback to the coaching staff.  I think that is wonderful and speaks even more to the Ubuntu concept.

Finally, credit all the other players that made that play happen.  Everyone was in just the right spot.  As I mentioned, Paul Pierce drew the attention and made the right pass.  Big Baby set a screen that allowed Ray enough space to get the shot off.

It was just one play, but it illustrates beautifully what this team is all about.