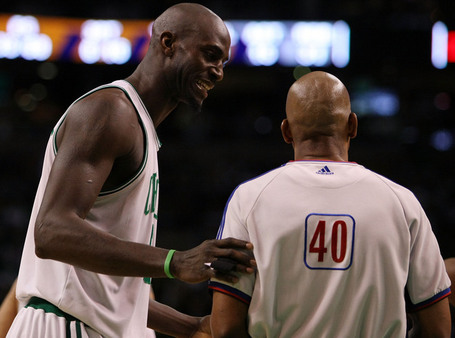 I hate blaming the refs for losses. Hate it. It seems like a cop out. I refuse to believe in conspiracy theories. Nobody is out to get us. Save it for Oliver Stone.

With that said, sometimes officials really do a poor job. It is a hard job to do, and they are under a lot of pressure and scrutiny, but they are also professionals paid to do this job and they should at the very least be consistent with how they call a game. That wasn't the case last night. Chippy hand checks were called at one point in the game and not in other points. Calls that were blatantly obvious were missed completely. It was just a sloppy effort on the refs part all around.

Did it cost us the game? I hate to admit it, but maybe it did. At least in part. The Lakers played well and both teams had a legit shot to win it. Which is why it is sad that this is a story today.

Don't just take my word for it. Here's Doc and Ray in the Herald:

Coach Doc Rivers stormed the court, believing Derek Fisher had fouled Allen, but there was no reprieve against the same foe than ended the Celts’ 19-game run on Christmas Day. Kobe Bryant and his pals earned regular-season bragging rights, for what that’s worth.

“I thought it was a hand-check,” Rivers said of the final play. “The officials say that they don’t call the game different from the first quarter to the end of the game, and if that’s true, Ray should have been on the free throw line. I just thought it was a hand-check from the time Ray caught it. He pushed him all the way. Unless the rules have changed, you can’t do that.”

Allen concurred, saying, “I was fouled. I was pushed. I got pushed into the shot.”

According to Allen, the non-call was even more galling because Kevin Garnett had fouled out with 4:22 left in regulation on an alleged shove after Pau Gasol (24 points, 14 rebounds) slapped the ball away.

And Doc again in another Herald article:

But the Celtics coach was voicing displeasure well before that.

“I thought in the third and fourth quarter the game got out of control,” Rivers said. “And I thought the officials allowed it to get out of control. I just thought there was a lot of chippiness. It was funny. Thirty seconds into the second half, I yelled out on the floor and said, ‘Guys, there’s elbows. Clean it up.’ I thought we’re the retaliators tonight a lot and we got the call obviously.”

"How much contact did I make?" Fisher asked, repeating a follow-up question. "I don't think I made any contact with him. As he caught the ball, we were running together and I was getting through (the screen). So if that's a foul, I guess so, but in terms of when he goes into the shooting motion, there's definitely no contact there. But the game wasn't decided only by that one particular play."

Finally some words from Bob Ryan:

Even the best officials get it wrong. The question emanating from this game, however, was this: What were these three men doing working a game of this magnitude? On a February Thursday night when there are only three games on the schedule, someone in power thinks that Monty McCutchen, Jim Capers Jr., and Leon Wood should be working what was, in the minds of many, the biggest game of the 2008-09 regular season? Really? Were all the real officials on vacation? Not acceptable. No game of this scope should be placed in the hands of third-tier officials. There were going to be legitimately unhappy people, no matter who won this horribly mismanaged game that left both sides confused as to what was, and what wasn't, a foul right from the opening tap.

With all that said, I'm not going to get too bent out of shape about it. I'm sure the boys in green and white have gotten their share of breaks over the course of the season. I'm a big believer in the theory that these things even out over time. It just stinks that this particular night we had to lose to the Lakers at least in part because of the refs.