Share All sharing options for: Rivers: "We’re not going to catch Cleveland" 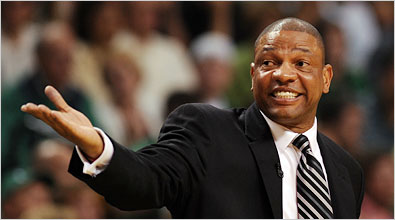 Mark it down.  Before the game on March 18th was the point where the Celtics conceded home court to the Cleveland Cavaliers.  The new secondary goal is to lock up the 2nd seed.  (The primary goal remains to get healthy)

Paul Flannery of WEEI has some of the quotes from the locker room:

"One, for us to get on the same page and two, to solidify that second spot," was how Stephon Marbury put it. "Once everyone gets healthy I think this team will be totally different."

"Either way, I still feel good about us winning a championship," Kendrick Perkins said. "I don’t care if we play home or away."

Say this for the Celtics, when the coach talks about something like this it’s not an accident and it’s not a sub-conscious slip of the tongue. The players were briefed about this subtle change in expectations and they are on board.

"That’s the one great thing about this team," Paul Pierce said. "We’ve never been down. We never look at one another, point the finger at one another, and we understand that we just have to keep working. The situation is what it is and we have to go out there and put our hard hats on and our work boots on and continue to work, regardless of who’s out there."

Can't argue with that.  Unless something highly unforseen happens, we aren't going to make up 4.5 games in a month. As the Akron Beacon Journal points out: "Ten of the Cavs' last 15 games will be at Quicken Loans Arena, where they are 30-1."

We still have a very good shot at holding off Orlando.  The game in Orlando on March 25 looks like it will end up being more meaningful than the showdown in Cleveland on April 12.  But the team is just going to keep repeating the mantra "we can beat anyone anywhere."

Personally I'll be watching the standings and tracking the first round of the playoffs to see who we will end up playing.  I think we can handle anyone (anywhere) when healthy (or mostly healthy), but there are certainly some teams we match up with better than others.  After a long regular season, I'm hoping for an easier postseason than we had last year.