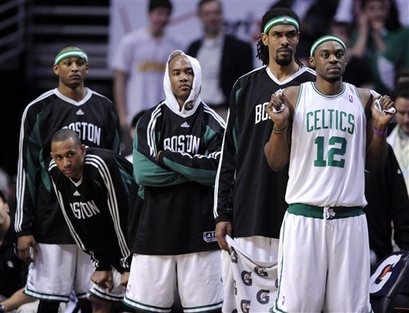 After reading the news about Leon Powe last night, I started wondering if this is as healthy as we are going to get this year.  I don't have any new information and I'm far, far, far from having any medical insight.  But is it really that big of a stretch to wonder if any of the guys still out can make it back to contributing on the court?

Doc said it all last night: “None of them are playing any time soon.”

Leon Powe has had multiple surgeries on his knees.  At first the Celtics made it sound like he bruised his knee, but later started calling it a sprain.  Again, I'm no expert, but I know that the knee is one of those things you don't mess around with.  I'm really hoping that he'll be back by the playoffs at 100%.  I'm just putting it out there that he might not be.

As for Tony Allen, haven't we seen this movie already?  Reports are positive that he'll be able to recover faster than expected.  But every time he comes back from an injury it takes him some time to get back into the swing of things.  He needs extended minutes even when fully healthy to be effective (Doc has said so on multiple occasions).  Shoot, I'll go so far as to say that under ideal circumstances he's prone to brain-sprains anyway.  He came back from injury last year around this time but never got back into the flow.  Will he be any different this year?

Now about Brian Scalabrine.  Not only am I not an expert on this, but I venture to say that nobody really understands the brain fully.  I am going to echo Sean Grande's thoughts here and say that I wouldn't be surprised if Scalabrine is done, and not just for this year.  We all saw what a valuable asset he had become on the court (as well as off it).  It would be a real shame to lose him from the team.  What would be a much, much bigger shame would be to risk damaging his brain in any way, shape, or form because he was put on a court without being 100% sure it was safe.

So, if we assume the worst case on all three of those guys, then we are left with the roster constructed as you've seen in the last couple of games.  Garnett will get up to speed sooner rather than later and Doc will try to limit the big three's minutes, but for the most part we have a pretty well defined rotation.

After the starters, we are looking at Glen Davis and Eddie House being the first big and small off the bench.  Both are prone to streaky play, but both have proved their worth and can play their role exceptionally well.

Beyond that you have two players still trying to get "up to speed."  Marbury is already showing that he can be an above average distributor and handle the ball.  His shots haven't fallen yet (Doc promises that they will) and he's never been a good defender (no promises there).  If he can run the pick and roll and not turn the ball over, he'll be a decent backup that allows Eddie House to play the 2 spot.

Mikki Moore is about what he was advertised as.  He's an energy guy that has length and can hit a midrange jumper when he's left open.  He's also foul prone and slow on the rotations that are critical to the defensive system.

Bill Walker is a bit of a wildcard.  He's still a rookie and he still does a lot of rookie things on the court.  On the other hand, he's showed that he can make plays with his energy and athleticism and he might already be more court-aware than Tony Allen.  Doc showed last year with Glen Davis that he's not afraid to use a rookie from time to time when the situation calls for it.  With a shortage of backups for Paul Pierce, we might see a good bit of Walker down the stretch and even into the playoffs some.

Keep in mind that we've still got some time left in this season.  A lot can happen in the last month of the regular season and the first couple of rounds last longer than one might expect.  If we can get one or two of the injured 3 back and contributing sometime in the playoffs, that would be a bonus. Getting Powe back would make me feel a whole lot better.

Otherwise, we're going to have to count on the new guys to find their groove sooner or later.  Stephon, Mikki, and even Billy will each have to find a way to find a niche on this team and limit mistakes enough that they can be counted on during the pressure of the playoffs.  They have less than a month to get into the groove.