Share All sharing options for: Rondo's Other Ankle Sprained 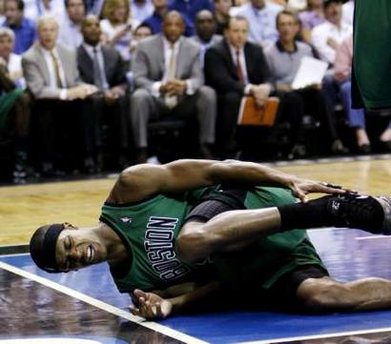 Rajon Rondo sprained his left ankle after Orlando center Dwight Howard stepped on it during a first-quarter layup. Rondo eventually got up, made the free throw, and played the rest of the game. After the game, Rondo was walking gingerly but still felt positive he would play tomorrow. He recently missed two games with a sprained left ankle.

"I feel bad. It hurts," Rondo said. "I played on adrenaline really. When I first got up I was cool and I wanted to make the free throw and I just keep playing. It's both ankles now. What's killing me is it seems like I just step on somebody's shoe or someone steps on my foot. It's not like someone is coming at me spraining my ankles.

"I plan on playing [against Atlanta]. I have a long day to rest [today]. I will ice both of them when I get there tomorrow and stay off my heat."

At this point I'm done with the standings.  Take a few games off Rajon.  Just get healthy again.