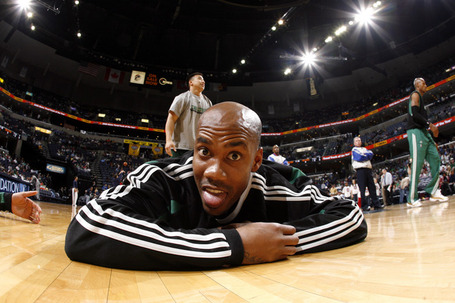 I meant to cover this yesterday, but I ran out of time and it looks like Red's Army and Tom Ziller have beat me to the punch. I'm not about to try to decipher the Starbury code and make any attempt to understand what's going on inside that guy's head. That is something I'll leave to the slobbering Pavlov's dogs that is the NY media. Unless he actually becomes a distraction in the lockerroom, I'll focus on his on-court performance.

So far, not so good. Ziller has it right when he says we've given him mostly a free pass thus far. He's also right that at some point he's going to have to show us a lot more.

Stephon Marbury has not played well this season. The analysts on T.V. and (let's be honest) the fans in Boston have given him a pass because, well, he hasn't played real live NBA basketball in more than a year. Fair enough. He's rusty, he's learning a new offense and defense, he's (for the most part) coming off the bench, something he has rarely done in his career. I buy it: Starbury has stunk, but there are some mitigating explanations.

But the excuses stop holding water in four weeks when the playoffs start. If at that point Starbury still cannot play, Doc Rivers and friends will have to make a decision whether to feature him in the rotation or to bury him in Sam Cassell's old sweatsuit.

To me it has to happen sooner than the start of the playoffs. He has to shake off the rust and play up to the standards that everyone has set for him. The bar isn't that high (in my mind). He just needs to handle the ball and run the pick and roll and knock down midrange jumpers when the shots come within the flow of the offense.

Will he be able to do that? Only time will tell, but that is something we are starting to run out of. So far he's played 14 largely forgettable games. There are only 9 games left on the schedule to get it right. I'm still holding out hope, but I grow more concerned each day.