The Truth Makes His Statement

Share All sharing options for: The Truth Makes His Statement 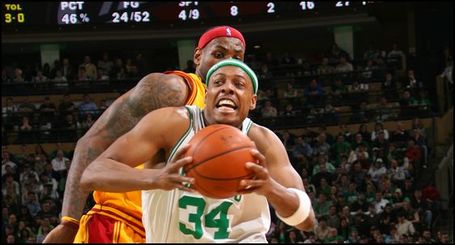 Of the many disturbing facets of the Celtics' visit to Quicken Loans Arena in January, none topped the result of the match-up between LeBron James and Paul Pierce.

Plenty went wrong for the green in the Cavs' 98-83 win on January 9.  But Bron's complete and utter dominance of our beloved captain was downright scary, particularly at the defensive end.  With some assistance from the help defenders that Mike Brown sent at times, James bottled Pierce up all night.  He bodied up to Paul every time PP picked up his dribble and routinely slid to the right spot to cut off Pierce's progress and prevent him from getting even as low as the foul line.  James got on the floor and chased down every 50-50 ball that night, and it isn't a stretch to say that Pierce's 4-for-15 shooting line (with five turnovers) wasn't as good as it looked on paper.

That LBJ did whatever he wanted at the offensive end in terms of getting to the basket, going to the line and hitting threes was just kerosene on the fire.  As fellow writer CelticBalla32 said to me after the game, "I've never seen [Pierce] mentally say 'You win' to a one-on-one opponent.  He did tonight."  That's certainly what it looked like, and as a Celtics diehard, the only word I've used to describe it since has been "terrifying."

In what was perhaps the Celtics' finest win of the season to date, the Truth reminded us that what happened in January was by no means a definitive sign of how things are going to be come springtime.

Pierce's teammates deserve some credit up front (although we'll get to them more in the bullet points) because the Celtics' strong play in the paint forced Mike Brown away from sending constant traps at Paul every time he touched the ball as he did during Pierce's 1-for-6 start from the field.

But from there on out, the captain was dominant.  On multiple occasions, when LeBron tried to body him away from the basket, Pierce simply elevated over him.  He rose up and drained a jumper from the right wing in the first half to nullify a defensive three seconds call on the Cavs, and he hit a similar shot in the second half.  On exactly the sort of play where LeBron throttled him two months ago, Pierce came up aces.

He spent the rest of the night finding different ways to tear up for the Cleveland defense.  Several times, the Celtics ran that 3-1 screen roll they like at the top of the circles, and it created mismatches for Pierce against Mo Williams and Delonte West.  Sometimes he shot right away at the foul line before the Cavs could even switch, and on a couple of other occasions he went right to the rim.  As Hubie Brown noted on ESPN, Paul has become adept at attacking across the lane from right to left, switching hands and finishing with his left while absorbing contact.  He had another beautiful lay-in of that sort last night, and he drained a couple of transition threes while he was supposedly on LeBron's watch.

Though the Cavs stopped sending help defenders to trap him early in the game, Paul started drawing them back to him later.  He got in the lane with ease and forced the Cavs' interior defenders to go to him, which opened up even more room for his teammates.  Once Cleveland cut the Celtics' lead to seven late in the fourth quarter, Pierce used his control of the offense to break the game open over the next four possessions.  After getting to the rim for a lay-up, Pierce drove again on the next play.  The Cavs' bigs stepped to him in the lane, leaving the captain free to dump the ball off to Leon Powe.  Lay-in.  Then a foul drawn on center Zydrunas Ilgauskas.  Two splashes from the foul line.  Finally, another drive meriting more defensive attention from the Cleveland frontcourt led to a sweet pass to Powe (more on him later) for a dunk.  In less than 90 seconds, the Celtics lead ballooned from seven to 15.  The Cavs never recovered.

For the night, Pierce dished out nine assists, including four in the fourth quarter.  He knocked down 10 of his last 16 field-goal attempts and went 4-for-5 on the rare occasions that he was permitted to step to the foul line.

Once more, the captain played the primary role in a concerted team effort to keep LeBron James out of the paint and ineffective from the field.  Yet again, he played Superman offensively when the Celtics' needed it, and he refused to back down from LeBron.  After the biggest plays, he gave us that clenched-fists-at-his-waist-head-raised-screaming-to-the-heavens expression that has come to punctuate clutch play from the men in green.  It felt just like spring 2008 last night.

O captain, our captain.  Unlike in Walt Whitman's world, he is anything but cold and dead.

Assorted ramblings about a joyous victory: