Share All sharing options for: A Very Pleasant Surprise 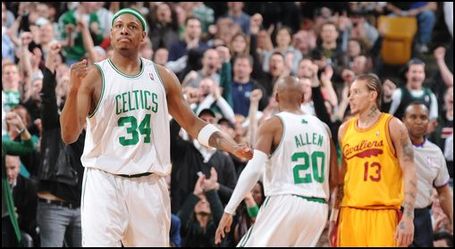 As I mentioned yesterday, I had all the optimism of a kid headed to detention yesterday.  We had no KG, no Scal, no Tony, and based on the way the LeBrons beat us the last time we met, it seemed like we had no shot.  But a funny thing happened along the way to detention.  The teacher decided instead to take us to Chuck E Cheese instead.

The Celtics played championship basketball last night.  They overcame tremendous obstacles and knocked off an elite team with perhaps the game's most elite player.  Maybe the team will try to downplay the significance of this game, but for us fans this is huge.

With the way LeBron has been steamrolling his way through the league this year, it was starting to feel like it was his year.  The odds are pretty good that King James is going to win multiple championships before all is said and done.  There's still a chance he could start that tally this year.  However, we know that he'll have to come through Boston to get it and now we know that the Celtics aren't going down without a heck of a fight.

Few people expected the home team to win last night, but they stepped up to the challenge and sent a statement to the league that the Defending Champs have every intention of defending their championship.  We still have a big game against the Magic, but we have a lot to look forward to.

Kevin is coming back sooner or later.  He can take all the time he needs to get back to 100% as far as I'm concerned.  We can also look forward to Marbury and Moore getting more familiar and comfortable with the system.  If we get lucky, we might even get Scalabrine and Tony Allen back (if nothing else to give us more options).

Sure, this win counts the same as the other wins on our schedule.  But at least to us fans it means a little bit more.  I'm sure I'm not the only one walking with a little skip in his step today.  Detention has been cancelled.  I'll meet you in the ball pit!