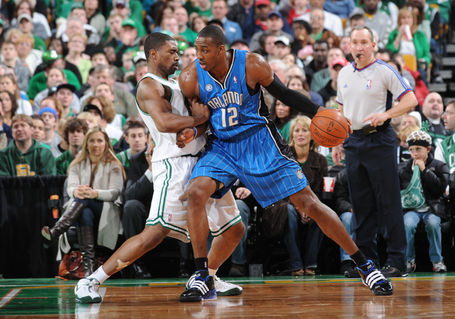 The Celtics came back and made a game of it despite (i) KG/Tony/Scal sitting again, (ii) Rajon joining them on the injury report (more on this later), (iii) Big Baby turning an ankle in the third quarter, and (iv) another slow start for a 1pm Sunday afternoon tip.

The first half was some seriously terrible basketball from the Celtics.  Really it reminded me of three or four years ago and I refuse to address it further.

The bright spots of the game were clearly Leon and Ray.   Leon backed up his strong performance against the Cavs putting up 12 and 7 with 4 drawn charges, and for stretches looked like the only Celtic who was hustling this afternoon.   Offensively Ray pretty much carried the team in the fourth quarter, and ended up with 32 on the day.   Ray is severely under appreciated at times.

Rajon was held out of this one following his ankle sprain on Friday.   Stephon started in his place.   Steph certainly wasn't worse than having Eddie run the point, but that's also a pretty low standard.  Hopefully some of his rust will wear off - it's clear there is a lot of it there, often Steph seems to miss handle a ball or mis-dribble, which to me are the tell-tale signs.  The offense really lacked aggression for much of the game, the impact of Rajon sitting this one out was pretty obvious.

Down the stretch, the Celtics had a chance to tie it, with Doc calling that same screen play for Ray that tied the game against the Nets this past Wednesday.   While  Ray's three went in against New Jersey, today it didn't fall.

No word yet on when Rajon or Glen will be back, but they will have a few days rest before Miami on Wednesday.   This is defintely a set back in the race for home-court advantage, as the Celtis fall two games back in the loss with the Cavs idle today.