Is 2nd Place That Bad?

Share All sharing options for: Is 2nd Place That Bad? 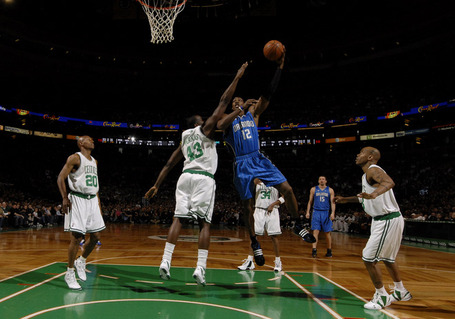 The Celtics showed this week that they can beat Cleveland short handed and they can almost beat the Magic even shorter handed. The thing is, if we lose any more hands, we'll find out what the sound of one hand clapping sounds like.

Right now we are missing 5 of the team's top 12 players, including two critical starters (KG and Rondo). Thankfully the injuries are (hopefully) the short term variety where we can expect to get the majority of the players back in time for the playoffs. But for the regular season, that's a lot of injuries to overcome to get the top spot.

Clearly the team can rise to the occasion for some inspired play for stretches at a time, but you have to wonder about the consequences of doing so. To keep pace and push for home court advanatge right now would require putting even more burden on the shoulders of Paul Pierce and Ray Allen. The role players (specifically our bigs) played a huge part in the victory over the Cavs, but we can't count on that production game in and game out. Pierce has already started wondering out loud how he's going to get more rest and I wouldn't want to put too many extra miles on Ray's legs either.

I don't think the primary goal should be to win homecourt advantage anymore. It would be nice, and in an ideal world I'd love to have it. If LeBron and company falter down the stretch, I'd be all for taking advantage and stealing it away from them (especially once we get healthy). However, the cost of pushing for the best record (in terms of wear and tear on Pierce and Allen) might offset any gains of playing a few more games at home.

The primary goals should be as follows:

Getting healthy should speak for itself. Getting the new guys minutes seems pretty obvious too. Managing the minutes of Paul and Ray might be a little more difficult for Doc. That may mean he has to bite the bullet and play Walker and Giddens (CSL reports that they were at the scorer's table yesterday but never made it in). They probably aren't 100% ready, but at some point you have to roll the dice and throw them out there.

Doc is clearly in a tough situation because his coaching instinct is to always try to win the game in front of him. But now he has to consider a myriad of other possible consequences and variables when making substitutions during the game.

Doc even admits that he's confilcted. See this quote about the decision to start Marbury over House.

Rivers actually questioned himself for starting Stephon Marbury at point guard over Eddie House, saying that his instinct was to start House (despite a lesser ability to handle the ball) because House had better command of the Boston offense. He ultimately chose Marbury because the Celtics need to get Marbury involved and opportunities of the like may be hard to come by.

Giving Marbury minutes with the starting unit is good for him in the long term but bad for the team in the short term. Maybe it would have been a better idea to start that experiment against a lesser opponent. After all, the Magic aren't that far behind and slipping to 3rd place is probably something we'd like to avoid if at all possible. But these are the kinds of tough decisions that Doc has to make every night.

For an added layer you have to wonder how House feels about being jumped in the PG rotation, especially after feeling slighted last year when Cassell was brought in for the same purpose. Not saying that is a big issue, but just another reason why Doc has to communicate well and make sure everyone is on the same page.

Anyway, I wanted to make a few points about finishing in second place in the East. First of all, 2nd place means likely having to face the Magic in the 2nd round. On paper that looks bad because they have the 3rd best record and they just beat us. But looking at the playoff brackets right now, is the 2nd round going to be that much easier for the 1st seed? If the playoffs started this week and assuming the top seed wins the first round series, they'd have to play the winner of the Hawks vs. Heat series. We all know how tough the Hawks could be and does anyone really want to face a motivated Wade in the playoffs?

Besides, I think we match up very well with the Magic. On any given night, when their jumpers are falling, they can beat anyone. But few teams defend Howard better than a healthy Celtics team. Perkins can body him up physically, KG is perhaps the best help defender on Earth, and Baby can at least use his center of gravity to push the guy away from the basket. Consider that Howard is averaging 20 points and 14 rebounds agaisnt the rest of the league and in 3 games vs. the Celtics is only averaging 14 and 10. Maybe this is a stretch, but I also find it helpful that we have Howard's old tutor (Clifford Ray) coaching up our big men.

My last point is that the Celtics should (should being the key word) have an easier time in the first round this year. Instead of the rising Hawks, we are likely going to see someone like the Sixers or Bulls, neither of whom can boast even a .500 record right now. In theory, we should be able to get our players healthy for the last few weeks of the season and really get tuned up in the first round. Hopefully by the time we reach the 2nd round we'll find our groove and keep on rolling to Banner 18. That's the plan at least.

First place would clearly be the ideal situation (provided it didn't leave us broken down and unfit to start the playoffs). We all know what happened last year and we've all heard the stat that the last 15 games against the Cavs have been won by the home team. Still, I think we can beat the Cavs in a 7 game series no matter where we play and I like our chances against anyone in the league if we get back to near-full-strength. Getting our guys ready for the playoffs is the most important thing. Let the seeds and home court stuff work itself out.