A number of interesting bits and pieces from this morning.

Some interesting comments from Doc on the rebounding concerns.  Downright offensive - ESPN Boston

"We're holding teams to 41, 42, 43 percent shooting, so clearly there's more offensive rebound opportunities," said Rivers, whose own team is shooting an NBA-best 48.7 percent, while limiting opponents to 44.3 percent (sixth in the NBA). "If we can get defensive rebounds, we can shoot 60 percent, because we can run. When teams are scoring and getting offensive rebounds, that slows the game down and takes us out of our break." Rivers noted that the Celtics don't put a heavy emphasis on generating their own offensive boards. He instructs his guards to fall back immediately upon shot release, while the bigs have the freedom to crash at their discretion.

Derrick Rose was the catalyst of the Bulls’ stunning win at Boston Jan. 14, providing 17 points and eight rebounds. Jason Kidd piled up 17 assists, to go with 13 points, in Dallas’s win over the Celtics Jan. 18. Rodney Stuckey totaled 27 points with 11 rebounds in Detroit’s victory Jan. 20. The only guard who didn’t lead his team to victory was Portland’s Andre Miller, who tallied 28 points, 8 assists, and 8 rebounds in an overtime loss Friday night. The commonality in those four guards is their strength and size advantage over Rondo. He simply can’t check those players one-on-one, and Rivers said the help hasn’t been there.

Above all, according to Celtics coach Doc Rivers, the return of Kevin Garnett has signaled a return to certain principles that had started to fade. "He’s the guy who holds everyone else accountable on the Celtic way to play, and without him I thought that was slipping," Rivers said following yesterday’s practice, raising an issue that has struck a chord elsewhere in the lineup.

A Word To Everyone: We Know Tommy Heinsohn is a Homer. Your Announcer Probably Is, Too " CelticsHub.com

Every week an opposing fan who watches their team play Boston on League Pass will submit a comment about the fact that Heinsohn is a homer and follow that ground-breaking analysis with a general complaint about Celtics fans. This will then spawn a few more comments about Heinsohn, some defending him as an Oracle of Truth, others ripping him and (the smart ones, in my opinion) arguing that Hiensohn is aware of his own schtick and plays it up for entertainment value.

Hardwood Paroxysm " Graphic Offense: A Look At Usage and PER Mid-Season (Click the link for fuller description of the stats and some pretty (and pretty interesting) graphs from around the league.

There are instances where you want more of a "fuller" or "fatter"distribution. Then there are times when you want to skinny-up the offense. The Celtics probably need to skinny it up a bit. Notice #3, there? Sheed. And House. With higher usages than Ray Allen. That’s pretty damning, as is Kendrick Perkins, even with his limited offensive set, not getting many opportunities with as high a FG% as he has. But still, that’s a pretty healthy distribution chart, with two of the best players as the highest. 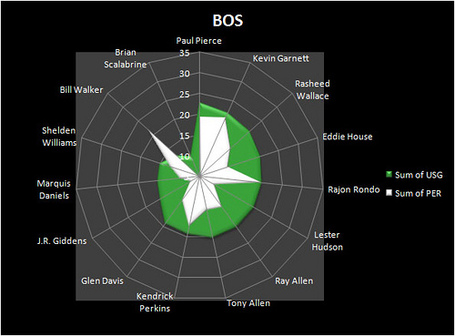