Can the Celtics Still Defend Without Thibodeau?

Share All sharing options for: Can the Celtics Still Defend Without Thibodeau?

[Editor's note: Please welcome new author Jack Jemsek, who has also joined us from Celtics Stuff Live and will be focusing mostly on statistical analysis - something this blog has lacked for the most part up to this point.]

Conventional wisdom has been that Tom Thibodeau, Doc Rivers former associate coach, was the chief architect of the vaunted Celtics defense from 2007-2010.  "Thibs" was legendary for the time he spent evaluating their opponents and prepping the players to play world-class team defense.

As shown in the table below, the Celtics were without question the No. 1 defensive team during Thibodeau's 3-year tenure with the Celtics.  For the combined regular seasons from 2007-08 to 2009-10, the Boston Celtics were the No. 1 ranked team in defensive field goal percentage (DFg%), the No. 1 team in defensive rating (DRtg), and No. 1 in fewest points allowed (PtsA).  Note that the "points allowed" is the least useful of the three, because it is dependent on the team's pace.  Still, it is another feather in Boston's defensive resume.  Despite last year's mid-season melt-down, it is surprising that the Celtics are only one win shy of the Lakers in having the best overall win-loss record during the same 3-year timeframe.

When it comes to having an effective defense, the coaches plan how to play the defense and make adjustments, and the individual players must execute the plan and then some.  Thibodeau has gotten most of the credit since he was the "defensive" coordinator for the Celtics.  Alternatively, perhaps the credit goes elsewhere, like to their defensive studs (as we shall see) or perhaps even Doc who makes clear there is no "I" in team with his "Ubuntu" mantra that was rolled out with the Big Three. 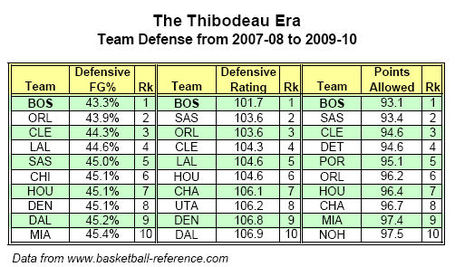 When team defense is working with the players "being on a string", it is an awesome thing to view.  However, even on an uber-team defensive squad, there are always individuals that deserve special mention.  In other words, the Celtics' Big Three of Paul Pierce, Ray Allen and Kevin Garnett have to yield to the Big 3-D to another triumvirate:  Garnett, Kendrick Perkins and Rajon Rondo.  These three folks have the top Defensive Ratings amongst the starters during 2007-2010, making Thibodeau look good (see Individual DRtg 2007-2010).  A hat tip goes to James Posey, P.J. Brown, Tony Allen and Leon Powe on their defensive skills, but they didn't approach "starters" minutes to qualify for the upper tier Big 3-D.  To make things more complicated, Paul Pierce and Ray Allen play pretty good defense at their positions as well, and simply have not been duly recognized for their efforts on the other end of the court.  Being an offensive star can be rough on the defensive ego . . .

To evaluate if the Celtics top-ranking defense has been more due to the special defensive talents of the players, i.e., KG and Co., and not necessarily Thibodeau's ministry, let's check in on the progress of the Celtics this season, and also what changes Thibodeau may have brought with him to the Bulls.  A note of caution:  it's a little early in the season to look at team stats since rotations are being ironed-out, strength of schedule issues may be prominent, injuries haven't averaged-out, etc. . . . but this is all for the sake of tipping our hat to Thibodeau and his inaugural visit to the Garden this past Friday with his Bulls.

As far as the Celtics defense is concerned, it seems solid as ever this year, even without Kendrick Perkins (and Thibodeau).  The C's have some nice numbers on the defensive end to support their early success this year, as they are ranked 4th in defensive rating with a value of 99.6.  Miami and Orlando take the top spots, each approaching an impressive defensive rating of 94.  Thus far, the Celtics trade mark defensive FG% isn't at the top, with their 43.6% being the 7th best, lagging behind Orlando, Dallas and Miami who lead with a defensive FG of 40% or lower.

If we look at the productivity of similar line-ups from last year to this year, we don't see much of a change.  Utilizing www.basketballvalue.com for the evaluation, we see that the line-up of Rondo-Allen-Pierce-Davis-Garnett has a defensive rating of 96.88 during the 66 minutes they shared the court this year.  Last year with Thibs, this line-up had a defensive rating of 97.44 in only 20 minutes of floor time, so the change in defense rating without Thibs has improved if anything.  Davis and Garnett had limited time together on the floor last year due to the presence of Rasheed Wallace, and that is why there was only a 20 minute sampling for last year.

If we look at similar line-ups with the Bulls this year versus last, the closest line-up to utilize is Rose-Deng-Gibson-Noah, except we have to swap out the shooting guard (using Hinrich vs. Salmons) with Bogans for this year.  Rose-Hinrich-Deng-Gibson-Noah had a defensive rating of 103.4 last year.  This year, with 72 minutes of floor time, the unit of Rose-Bogans-Deng, Luol-Gibson-Noah has a defensive rating of 102.2, which is a slight improvement.

So at this early point in the season, there is essentially no significant improvement in the Bulls defense resulting with the addition of Thibodeau.

Not Forgetting About Doc Rivers

Something tells me that Doc Rivers is not necessarily hands off when it comes to coaching defense.  During the latter years of his career, he ended up with some very defensive oriented-teams in the Knicks (Pat Riley) and Spurs (the No. 1 defensive team over the last 10 years . . . by far).  And before that, Docs signature franchise, the Atlanta Hawks, were a fairly gritty team with Mike Fratello being the head coach.  Fratello was not only the "czar of the telestrator", but his team's routinely had the NBA's slowest pace with his "grind-it-out" half-court approach to the game that emphasized defense.

I also recall that during the 3 seasons prior to the arrival of the Big Three, all Doc Rivers prescribed during practice with his nubile group of Jefferson, Gomes et al. seemed to be "defense".  Unfortunately the youngsters didn't "get it", and we saw Pierce conserving his energy for the offensive end, which they sorely needed from their star.  I always thought their offense was so poor because all they did was practice defense!

Also complicating matters is that the Celtics have Larry Frank now second in command to Doc, and Frank is supposedly a defensive-minded coach as well.

In the end, you can safely say that Thibs is a hard-working perhaps very good coach that is still working out the kinks in Chicago.  His main contributions in Boston were to assist Doc instill a system that uses the new talents of the team.  Certainly the fact that he was there when Garnett, Allen and Posey came on board accelerated the team's performance.  But when accounting for the defensive success of this team, I can't get beyond the fact that the Celtics players, along with Doc Rivers focus on "playing together", are more important than Thibodeau's role as an assistant.