Share All sharing options for: The Ray Allen Bench-Scale Test

Ray Allen leads the Celtics in adjusted plus-minus (APM) calculated over the last two years, with a +5.1 value compared to Kevin Garnett who comes in at second with +2.6 (see  basketballvalue.com).  He has demonstrated that he consistently has made the other players around him better - even on this ultra-talented Celtics team of all-stars and future hall-of-famers.

For those of you not familiar with the plus-minus statistic, the plus-minus is simply the score of the game for the segments of time a particular player is on the floor.  The APM came along as a statistical method to remove the bias created by playing with better players, say when Brian Scalabrine had the privilege of playing on the floor at the same time as the Big Four - Scalabrine's plus-minus would be the same as the Big 4 if it were not adjusted.

Ray's play motivated me to write about his value as the Plus-Minus Leader for the Celtics last January with CSL, and so I've been keeping a close eye on Ray ever since.  Sadly, this year after 16 games, Ray Allen is sitting at the bottom of the plus-minus (unadjusted) and APM rankings for the Celtics starters.

While I fancy myself one of Ray's more faithful fans, I'm not happy about it and delved into the why and how of it.  Below are the APM and the plus-minus (unadjusted) summaries for the Celtics: 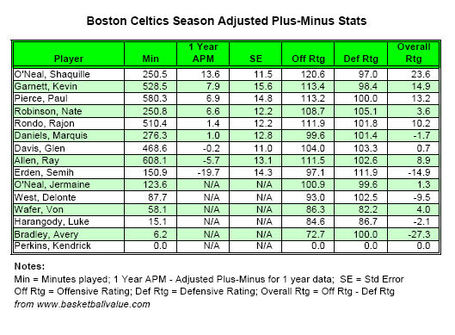 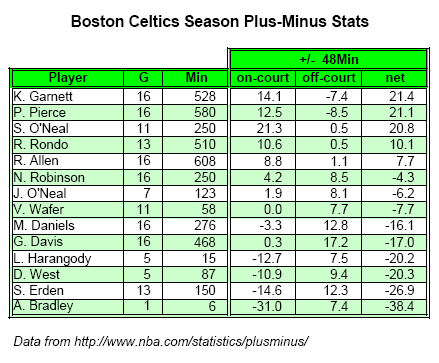 According to www.basketball-reference.com, Ray Allen is exceeding or matching his production per minute in all categories except for free throws attempted which is down from 3.2 to 2.2 attempts per game.  Ray's 3-point shooting is up from 36% to a whopping 45%, and all his other box score stats are virtually the same or slightly better.  So what is the difference in Ray Allen's plus-minus this year?

As shown on the APM summary above, Shaquille O'Neal is simply kicking butt for the Celtics and has been a positive influence on the floor, despite only playing his normal 20 minutes a game.  The APM is calculated on a net 48 minutes on the floor, so that Shaq's effect is made clear with a team leading +13.6 APM.  Not bad for someone that was picked up for the veteran's minimum salary during the late offseason.

Shaq also has the best Overall Rating, slightly out-distancing Garnett and Pierce.  All three of these guys have a net +/- per 48 minutes (unadjusted) of greater than +20 which means Doc or any other coach with his wits about him would only remove them from the floor with the long view of resting them for the playoffs in a little over 4 months time.

Before Shaq's curious absence from practice yesterday, he told greenstreet.weei.com that this Celtics team was the "best team" he's been on:

"As far as players....as far as guys being really close...I know we've only been at this for two months, but hopefully the outcome [will] be a good one."

And of course, who else would Shaq have the best 2-player combo plus-minus with? . . . none other than Ray Allen.  This can be shown on the nba.com/statistics/plus-minus page (which is also unadjusted).

No wonder Shaq loves the Celtics - he gets to play with Ray Allen who has had the magic touch of making people around him better.  Playing with the rejuvenated Kevin Garnett and Paul Pierce and the all-world assists leader Rajon Rondo hasn't hurt Shaq either.

THE CULPRITS ON THE BENCH

So somebody's gotta pay for dismantling Ray Allen's plus-minus throne . . . and you have to look no further than the bench.  Ray is still relied upon by Doc to play the most minutes and is usually logging the most minutes with the 2nd unit while the starters get a breather.

Amongst the major rotation players, Ray Allen and Glen Davis have the lowest 2 player combo plus-minus on a per minute basis.  But Marquis Daniels, Jermaine O'Neal (when he was playing), Delonte West (before he broke his wrist) and Semih Erden (more about him below) show an even larger losing effect on the Celtics from a plus-minus perspective.

Below is a table showing the plus-minus of everyone when they are on the floor with Ray. 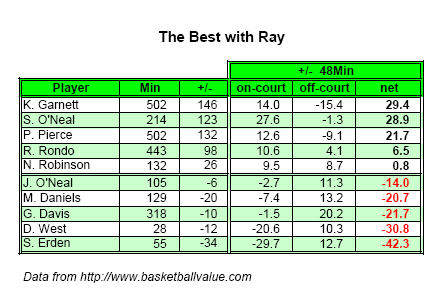 Allen and Davis are admittedly logging tough minutes with the reserves more so than Rondo, Garnett, Pierce and Shaq.  The line-ups that have lead to Davis and Allen both taking a hit in the plus-minus column, include Delonte West - Marquis Daniels - Semih Erden, Nate Robinson - Daniels - Erden, and Rondo - Daniels - Jermaine O'Neal.  In different games, these groups of five have yielded some substantial runs to the opposition, notably in games against Dallas, Toronto, Chicago and Miami.

But wouldn't you rather have the Celtics bench than say . . . the Miami Heat's?  But methinks that Jermaine O'Neal came as advertised from Miami as he simply hasn't got it done . . . if he ever can be truly healthy.  As shown in the above APM and plus-minus tables, the difference between which O'Neal is playing the center position for the Celtics has been stark.

Ray Allen has more court time with Semih Erden than any of the other starters, and that is where Ray appears to take one of his bigger hits in his plus-minus stat.  Erden has played 150 minutes thus far this season, or approximately 20% of the available minutes at his center position.  During those 150 minutes, Ray has played 55 with Semih, and has a plus-minus -34 for that time.  Pierce has 38 minutes with a plus-minus of -22, Rondo logs 34 minutes with a -16 and Garnett is not even spared by Semih's drag, as his 11 minutes on the floor with Semih have yielded a -14.

Semih has been fun to watch develop, but Erden on the floor is only a band-aid until Kendrick Perkins makes it back and, together with Shaquille O'Neal, make Ray Allen be Ray Allen again.

Ray's task of keeping the 2nd string solid on the floor has simply been more than he can overcome this year - and that's making Rasheed Wallace looking better than ever compared to the J O'Neal-S Erden fix the Celtics are saddled with.

But at 12-4 and tied for the Eastern Conference lead, who beside a stat-head like me would complain?  Again, the credit goes to the phenomenal play of the starters thus far.  And I suppose if the bench ain't broke - don't fix it!