Share All sharing options for: Practice Notes, Starring Perk's Return to the Court

Kendrick Perkins returns to the court

Perk returned to practice today -- well, kind of. He participated in dummy offense drills, and even dunked a couple times during pick-and-roll drills (I bet you my life savings he paused and brought the ball to his knees before the dunks). Perk said it was good to be back, and told Comcast's Carolyn Manno he's surprised to be feeling so well.

Perk's return date is still unknown. Doctors have told Perk he might return by late January, but Perk himself still targets the All-Star break. Playing it safe. I like that.

"The mental part is when he comes back, how much he trust his leg," said Rivers. "If we can get anything out of Perk this year, we’ll be thrilled. I know he's going to play, but it usually takes a year after surgery to be completely confident."

Jermaine O'Neal will return at some point this week

Jermaine O'Neal has missed the last 19 games, but practiced today and should be ready to play sometime this week. O'Neal said he's "50-50" for Wednesday's game, but said he will return for the Christmas Day tilt against Orlando if he can't play Wednesday.

And he definitely doesn't sound like someone who's too confident in his health. Of course, if I were as brittle as a toothpick, I wouldn't be too confident in my health either. (ESPN Boston)

"My body is going to be a little sore, I've been out a month and a half," said O'Neal. "But there's a difference between soreness and pain. I'm just a little sore. This is who I am right now. This is what God has given me right now. You deal with it and move forward. With the brace, it’s going to help, but I can’t guarantee that the knee is not going to flare up. But right now I feel good, I feel strong, I feel capable of helping the team."

Also, some Celtics have musical talent...

One last piece of good news 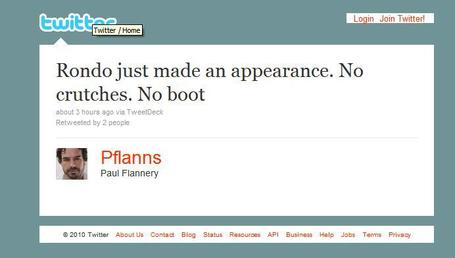