Share All sharing options for: Celtics Rebounding From Last Year

The low point in the Celtics rebounding woes was undoubtedly Game 7 of the Finals when the Lakers out-rebounded the Celtics by a 53 to 40 margin.   The Lakers grabbed 23 offensive rebounds in Game 7, which helped propel them to the championship victory despite their dismal 33% shooting percentage for the game.  Ouch!

During the off-season, salt was tossed in the rebounding wound with the fact that Kendrick Perkins was going to be out for at least two-thirds of this season due to the knee injury suffered in Game 6 vs. the Lakers.  Hope was further dimmed by Kevin Garnett having a post-rookie season low of 7.3 rebounds per game; conventional wisdom suggested that things were only going to get worse due to the NBA mileage KG has logged.  Then Rasheed Wallace retired, leaving the Celtics with no healthy center to start the season.

Low and behold, the Celtics managed to stock up in bigs over the summer signing Jermaine and Shaquille O’Neal as well as rookie Semih Erden.  At this point, it’s no secret that the Celtics have improved in rebounding this season over last, boosted by the joint rejuvenation of KG as well as Shaq.  The Celtics rebounding differential has improved by a +2.8 margin from last year to this year, resulting in a net +1.3 rebound per game advantage that ranks 9th in the NBA.

So last season's rebounding horror has been buried three times 7 feet deep . . . or has it?

In the preseason, the Boston Herald article Will Shaq Solve the Celtics Rebounding Woes? by Dan Duggan took aim at the issue.  Doc was quoted as saying the following on the acquisition of the O'Neal's:

"Hopefully it cures our rebounding woes.  We're not going to have Perk for a while so we went out and we got the O'Neal brothers. We'll find out, but I think that's an area that we've addressed on paper with size."

Doc didn't stop with laying the responsibility of rebounding at the feet of just the front court personnel:

"I think [Rajon] Rondo and Paul [Pierce] and all those guys have to rebound better than they did last year.  If you looked at our numbers, everyone's numbers were down - not just the bigs, the guards' numbers were down on defensive rebounds. I think everyone has to improve rebounding."

Conversely, Chris Forsberg notes in his Dec 3rd Celtics:  Second-chance Points ESPN-Boston blog that Doc also stresses to his team that he wants the guards to get back on defense after misses and limit transition points.  It seems to Doc that it is all about the defensive rebounds, thereby limiting their opponent's offensive rebounds.  However, the Celtics do not appear to be too vested in chasing their own misses (see below).

Before we look at the less than stellar offensive rebounding by the C's, I just want to make it clear that the Celtics don't need be the best when it comes to rebounding, as long as they keep leading the league in effective field goal percentage (eFG%) by a large margin.  Note that eFG% accounts for the scoring value of 3-point shots versus straight FG%.  The Celtics rule in leading the NBA in team eFG% differential (offensive minus defensive eFG%) with a +6.6% differential.  Why you ask? . . . because the Celtics have the NBA-best offensive eFG% at 53.4% and the 2nd best defensive eFG% at 46.8%.

eFG% is the foremost metric within the Four Factors developed by Dean Oliver of Basketball on Paper fame, and the one that the Celtics have ridden to success during the Big Four era (2007-present).  Given the all-star talent and the defensive leadership that remains despite Thibodeau's departure (anyone shocked by when the Knicks had 85 points on the Bulls at the end of the 3rd quarter on Christmas?), shooting well and defending has been Doc Rivers calling card with Garnett, Pierce and Allen forming the foundation.

You might ask - what is the relative importance of the other Four Factors compared to eFG%, the other Four Factors being 1) getting offensive rebounds (offensive rebound rate - ORR), 2) limiting turnovers (turnover rate - TOR) and 3) getting foul shots and making them (free throw rate - FTR).  As stated at basketball-reference.com, Oliver suggests that the weights of importance for the Four Factors are 40% Shooting (eFG%), 25% Turnovers (TOR), 20% Rebounding (ORR) and 15% Free Throws (FTR).

A bit of a controversy exists with regard to the importance of rebounding between the likes of Dave Berri (Wages of Wins), who has a decided emphasis on rebounding, compared to Dean Oliver's system.  If the Celtics success is any indication, it is clear that the value of turnovers, rebounding and free throws pale in comparison to shooting, as the Celtics rank 25th, 22nd, and 19th , respectively, in the team differentials for these lesser factors, while still maintaining one of the best records this year.  It goes to show you that their 1st rank in shooting differential goes a long way in predicting wins.

One thing I'd like to add that sets this team apart is their league-leading 24.8% assist rate, which is the fraction of possessions that end up with an assist.  This indeed defines the team in terms of their ubuntu mantra of "trust each other" with the rock, as you've heard Doc say courtside so often via microphone.

The team history for rebounding rates is provided in the table below.  Note that total rebounds are invariably linked to field goal misses by one team or the other.  Since the Celtics do relatively little of in the way missing, but make the opponents miss a lot, rebounding rate is particularly useful to understanding the Celtics.  The rebounding rate essentially equalizes the number of rebounds available to each team, and then assesses how good the team is in snatching them up, whether they are of the offensive or defensive kind. 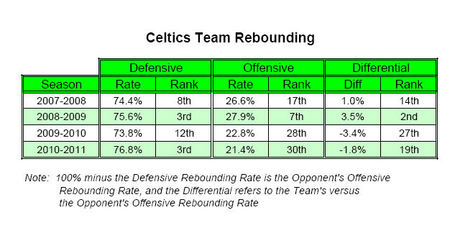 The Celtics have never been a truly bad defensive rebounding team, although as Doc said, the team definitely slipped last year and ended up ranking 12th in defensive rebounding rate (DRR).  This year has been much better, with the 76.8% DRR being the best in the Garnett-Allen-Pierce era (ranking 3rd this season).

Again there is improvement from last year when they were 27th in rebounding differential, but you'd like to see the Celtics capitalize on the missed field goals they force, and limit the opportunity for 2nd chance points.

When it comes to the energy put forth in offensive rebounding, perhaps the team has adopted Ray Allen's short-term memory loss regarding missed field goals.  After all, with the power of positive thinking and skill set that these guys have, you would think that all their shots are going in.

More Thoughts on the Rebound. . .

"At this point, I'm trying to get every rebound out there.  Perk's out, Shaq's out, and I'm telling [Paul Pierce to] get out of there. Semih comes in and he's taking some. It is what it is."