Share All sharing options for: Pacers Come To Boston For Another One of Those Non-Playoff Thingys

If you need a quick opinion on the state of the team right now, feel to scroll down. Needless to say, most of us here in Celtics Land are a little bit bummed. Just a smidge. Okay, a bit. Well okay, we're quite a bit. A lot. Like, a ton bummed. Yes.

But, c'est la vie. You can't win every game. Sometimes, your team isn't what you expected it to be. Sometimes, you drop games to the Nets and sometimes you get destroyed by the Grizzlies. It's a box of chocolates. The important thing is that you put down the one filled with mayonnaise and hope the next one is filled with the dark chocolate nougat type filling. Or cherries, if you're cordial. (ha-ha!)

Our candy du jour tonight is the Indiana Pacers. More A#1 Good Job! analysis after the jump.

We've seen this same scenario quite a bit recently. Chippy, yet under-talented/under-developed team with a sub .500 record strolls into the Garden. The faithful pray for a good ol fashioned 2007-2008 blowout. The skeptics say 'it'll be close, but we're going to pull this out.' Randy Quiad yells obscenities from the bleachers 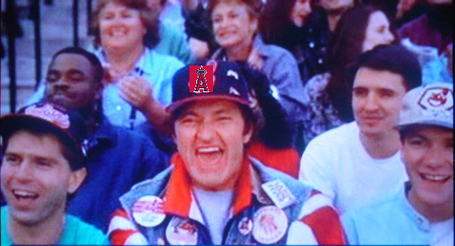 It's all the same every game we face the traditional underdog team.

Well I say we forget all that. All of it. No more can the Celtics pencil ANNY team in the win column. Not the Nets, Not the Grizzlies, Not the Paces...NOBODY.

Tonight I will just be happy with a win. I'm not asking for blowouts anymore, or even a full 48 minutes of consistent play. I just want wins.

If this team was 'going to grow' or 'gel' or 'froth over' or whatever, it would have happened by now. We've no longer got the luxury of hoping that one game it is just going to be turned on. Well, actually we can hope whatever we want, we're fans. We can hope Sheldon Williams will finally learn to fly, or that KG will become a noble laureate for his poetry. But, it is better to be realistic.

So tonight, I say cast your lofty unrealistic expectations aside, and get ready to watch a tough, slow, messy basketball game that is probably going to be a lot closer than you would expect. I still fully expect a win, but it will not be a pretty one.

Matchup Of the Evening: Paul "I'm not Injured, I Swear!" Pierce V Danny "I don't really have nickname yet, sorry" Granger

Everytime the Pacers play anyone this is the Matchup to watch. Heading into the season Danny Granger was a half-step behind Brandon Roy and a full step behind Kevin Durant as a projected player. He was that good last year. This year, while he hasn't taken a step back, he hasn't improved his stock either. Anyway you slice the pie though, Danny Granger is still the best offensive player on the floor.

Paul Pierce on the other hand has been quite the enigma. He's still called Paul Pierce by people who recognize his face, and he wears Paul Pierce's number. Heck, he even went to the All-Star game under the guise of our beloved Paul Pierce. But the man that has been on the floor for the Celtics since Christmas has NOT been Paul Pierce. He shoots a better 3, but has all the explosion of one of those dinosaurs you buy at the museum of natural history, the tiny little ones in the airtight packages, and they're supposed to expand when you put them in water, but really, they only turn out to be some crappy sponge/soap hybrid that expands to about 2x its side, which was honestly pretty small to begin with, so no big whoop. That's how much explosion and punch Paul Pierce has had.

While it is a bit unrealistic to imagine the team suddenly 'clicking', but I do not think it is unrealistic to see Paul Pierce suddenly become a much more efficient player. Lets see if the real deal shows up tonight.

A famous CB forum member once said that TJ Ford is the ONLY player who can consistently 'out rondo' Rajon Rondo. Ford is quicker, and undoubtedly playing more aggressive. Rondo is going to have to work tonight.

Three Keys to the Game for the Good Guys:

1) Don't Play With Too Much Emotion: This team has often been looked at as the trash talking bad boys of the NBA. Well, bad boys in a very liberal and not true sense. But with Garnett on the team, attitude was never the problem. I think now, that attitude has sapped the fun out of the game for these guys. They're not only not the team they once were, they' can't even be the team they could be. The Celtics need to stop worrying about how they're NOT playing, and start concentrating on how the ARE playing, and make the best of it.

2) Stop Looking at the Floor: Man, did anyone see a timeout recently in a Celtics loss? it's like the guys are walking over to the bench with 50 lb weights on each arm, shoulders slumped like some kind of archaic proletariat parodying the USSR. Have some spine Celtics. God helps those that don't quit when the other team doesn't just run away that help themselves!

3) O Perkins, Perkins, wherefore art thou Perkins? The bare bones of it is basically, we need Perkins. Gotta have him. We can't win without Kendrick Perkins, N'est pas possible. In the first 39 games of the season, he had 13 double doubles. That's exactly 1 dbl-dbl ever 3 games. Since then, over the past 24 games, he's had exactly 1 double double. It's not much of a coincidence that the Celtics have gone 13-11 over those 24 games.

Have Faith Celtics Fans. Tonight Brings us a Win.