Anyone who has been lucky enough to attend a Celtics game at the TD Garden in the past few years knows just how entertaining it is. Fans are treated to great basketball (usually), but some of the biggest cheers come during timeouts through promotions and/or JumboTron appearances. Being at many Celtics games this season, I have noticed a select few fans who simply stand out above the rest. On any night you can expect to see these fans in the building hamming it up on the JumboTron to the delight of the Garden faithful. Simply stated, these guys just have it. Here's the lineup: 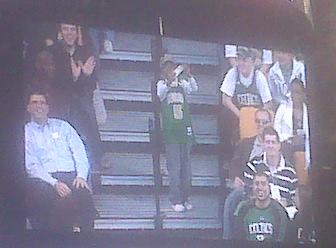 (PG) Soulja Boy Jr.- By far the coolest cat in the Garden, when SB Jr. gets going, there's no stopping him. Perhaps no one, not even KG, can pump up the crowd quite like this young man can. The ladies go wild for it, hell, so do the men. His on-screen charisma will go down in Garden history books. His moves are mesmerizing, and just when you think it's all over, he pulls out some new moves that you never even knew were possible. Many try, and all fail when it comes to out-dancing this dance machine. Rumor has it that SB Jr. was teaching Michael Jackson himself some new moves before Jackson's death. Give this kid a basketball and he can do things with it that would even make Rondo jealous.

Is there even a question that this is the most popular kid in grade school? I bet he hasn't brought a lunch to school in years. His classmates are just begging him to have some of theirs. And how do you teach a classroom full of children with a celebrity as one of the students? As far as I'm concerned, this kid should get a homework pass for the rest of the season. We need him during the playoffs, that's for sure. If Gino was born in the late 90's, he would look something like this kid.

(SG) Suit Coat Santa- This man has seen it all, and still comes back for more. Always sporting the tan blazer over the vintage Celtics jersey, this is the kind of man who would show up to a dinner party, get up on the table, and dance. And dance he can. He moves up and down the aisles so fluently- poetry in motion. He pounds his chest harder than KG does. His style is only rivaled by SB Jr., but there's no doubt the two dominate their respective age groups. I can't imagine SCS being able to stand more than five minutes with his old high school buddies. He's just in a different gear, like 5th gear, while they're most likely stuck in park. The man simply has not aged the same way anyone else has. He has the appearance of a 70 year old, with the mindset of A 21 year old. Good luck trying to keep up with this guy at a party. What hair he lacks on his head, he makes up for in that beard. This man screams "clutch". I want him taking the final shot at the buzzer, plus he has more hair than Ray. Couldn't get a picture, but just envision a skinny Santa Claus with a smaller beard and a tan blazer instead of a red coat.

(SF) Chicken Dance Guy a.k.a. Jack Black's look-a-like- Definitely the most active out of this superstar lineup of fans. You won't find this fan in his seat, ever. You will, however, see him dancing up and down the isles, often times with security guards in tow telling him to find his seat.  That won't stop him though- nothing will. One thing is for sure, he wants to hear you. When he's not dancing, he's got his hand up to his ear- asking, begging, for you to get loud. If you're not too busy laughing, you at least owe this man that. While it can't be confirmed that he is Jack Black's actual brother, I wouldn't be surprised if he was. We know he could run the floor, and that's key for the SF position. If he can penetrate to the basket like Pierce, he'll pick up the double team and either draw the foul or dish it out to Suit Coat Santa for the open jumper. 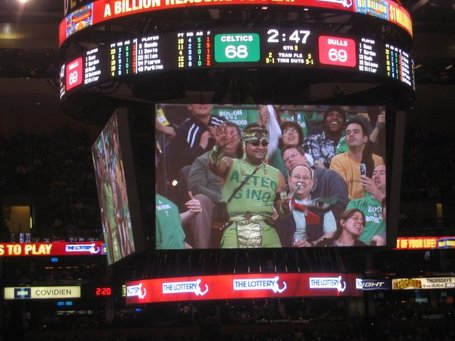 (PF) Aztec Gino- The wildcard. This man has to be crazy, right? If the Garden is his insane asylum then so be it- we're glad to have him. By far the most mysterious of all fans here at the Garden, origins of AG's fandom are unknown but some would say it traces back to around the 14th century. You simply cannot miss this man, and that's how he wants it. Decked out in a one of a kind costume complete with "Aztec Gino"  blasted all over, this fan represents everything crazy about being a Celtics fan. His arms work like pistons as he dances to the music and waves his Celtics flag. Up by 20 or down by 20, I don't think he knows or cares- AG simply cannot and will not be stopped. I'm not sure about AG's basketball skills. To be honest, I don't care. You stick him on the court simply to psych out the opposing team. He doesn't need to be a scorer, we have those. 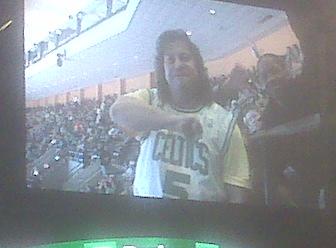 (C) Balcony Gino- What can we say about this man? A god amongst fans in the balcony, Balcony Gino is no stranger to the JumboTron. A man of few words, or movements, his message is clear- Gino lives in the balcony. To the first timer, Balcony Gino may be somewhat of a scary figure. He stares into the camera with his scruffy beard and shaggy hair, nodding his head up and down. "What's going on here?" you might ask yourself. All of a sudden he lifts up his shirt. Relax, there's another shirt under it that says, "Balcony Gino". You win again, BG- you always do. And with BG patrolling the paint, I challenge any other fan from any other team's arena to come through. 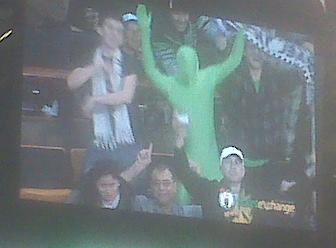 (sixth man) Green Man- Invented by the character Charlie from "Always Sunny in Philadelphia", Green Man has made his way to the Garden. He is a newcomer at this place, and it can't be certain that there is only one man behind this costume- as we have no idea what he or she actually looks like. Regardless, green man moves like those putties from Power Rangers back in the day. Just constantly moving in all directions, but going nowhere. How do you defend that? Plus, if Sheed can be the sixth man...

(seventh man) Hoop Hat Kid- This kid has it made. A new face to the TD Garden JumboTron scene, this young fella has taken the Garden by storm. He has a seat in one of those luxury boxes at just about every game this season, so clearly he's important. His claim to fame? A hat that looks like a basketball. So simple, yet so, so, satisfying to the Garden crowd. He can literally do no wrong, and he knows it. We all know it. Bball hat on his head, hands in the air waving to the music, this kid is the total package.