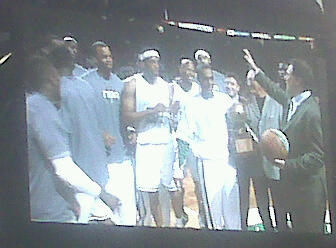 Rajon Rondo won the Red Auerbach Award for the 2009-10 season. It is the the 5th time the award has been given out. The award was first given to Al Jefferson during the 2005-06 season. It was then given to Paul Pierce, Kevin Garnett, and Ray Allen.

So what is the Red Auerbach award? From Celtics.com:

The award is given to a Celtics player who best exemplifies the spirit of what it means to be a Celtic. This award is named in honor of legendary coach, General Manager, and President of the Boston Celtics, the late Arnold "Red" Auerbach. The Red Auerbach Award was created in 2006.

Yet another example of Rajon Rondo transforming into the star of this team before our eyes. Nice gesture by him to call the rest of the team over to center court to join in the ceremony.

Rajon Rondo deserves this award because he has proved that not only can you be a great basketball player but you can be an amazing role model in the Boston community and off the court. I am proud to have someline like Rajon as a Boston Celtic because he exemplifies what it means to be a true Celtic.

Congratulations to Rondo, and here's to this being one of the many trophies and awards that decorates his home throughout his career here.

p.s. How did Sheed not win this award? Kidding.