Share All sharing options for: Celtics Looking to Close out Series With Game 6 Win in LA

For the third series this post season, the Celtics are at a 6th game with a 3-2 lead in the series and a chance to close out the series in game 6. The Celtics beat both the Cavaliers and the Magic in game 6 to move on to the next series. The Lakers could prove to be more difficult than either of those teams to close out. The wins over the Cavs and the Magic were in Boston while this game 6 is in LA. However, the Celtics have been the best road team this season and also have proved that they can win in LA with their game 2 win.

The Celtics have been winning as a team. No player is averaging more than 20 points per game, but yet 4 of the starters are averaging between 16 and 20 points. The Celtics are also winning with defense. 3 of the top defensive players in the playoffs are on the Celtics (KG, TA and Perk). The Celtics bench has also come up big with Sheed, Big Baby and Nate especially having a big impact on the games so far.

Andrew Bynum has been struggling in the last 2 games, noticeably limping at times and unable to jump or move laterally. In spite of this, he still played over 30 minutes in game 5. Without Bynum to provide the muscle next to him, Gasol has reverted to 2008 Gasoft form. Kobe has been Kobe, at one time scoring 23 straight points for the Lakers in the 3rd quarter of game 5. But he is having to do too much because his teammates aren't stepping up to help.

A telling stat in this series is looking at the offensive output of the Lakers for each game. In Game 1 they scored 102 points. In game 2 their output decreased to 94 points. In game 3, they further decreased their offensive output to 91. In game 4, they scored even fewer points, going down to 89 points. And in last night's game, this trend continued as they scored only 86 points. This indicates that the Celtics defense is getting tighter and tighter, the Lakers are getting tired, and Doc has been making adjustments while Phil has not. I like the trend and hopefully we see it continue in game 6 and the Celtics get the win. The Celtics defense will once again be a huge key.

The Celtics need to look at this as though it is game 7 and their last chance to win since anything can happen if they let this game slip away. One worry is that the officiating will be overwhelmingly in the Lakers' favor since these games have been setting viewing records for the network and the league would benefit financially by a 7 game series. But, as long as the refs let them play, the Celtics have proved that they can win in spite of poor officiating. They proved that in games 2 and 5, winning in spite of a large free throw disadvantage. Anything can happen if this goes to 7 games. Perk and Sheed could be suspended. There could be injuries. And they could have both Salvatore and Kennedy as the officials. That should be enough incentive alone for the Celtics to close it out tonight.

The Celtics have the chance to become the first 4th seeded team or lower to win the championship since the 6th seeded Rockets did it by sweeping the #1 seeded Orlando Magic in 1995. The title is there for the Celtics to take and hopefully they come out strong and win it here and now. 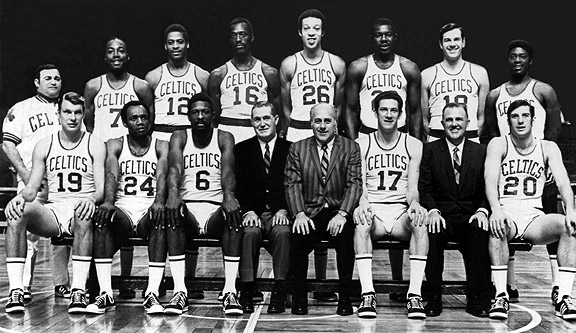 The 1968-69 Celtics were too old. Their window had past. They struggled in the regular season with injuries and entered the playoffs with the worst record of any team in the playoffs. They had to win on the road because they didn't have home court advantage in any of the 3 series. They faced a vaunted Lakers team in the Finals who were anointed as the champions before a game was even played. The Celtics weren't given any chance to beat what was considered to be a superior Lakers team.

When they made it to game 7 in LA, they saw the ceiling lined with nets full of balloons and saw all the cases of champagne lining the halls and there were fliers being passed out with details on the Lakers victory celebration. But that team had Celtic Pride. They reached deep down and pulled out that game 7 and the series and won the Celtics 11th championship. That Celtic Pride is alive and well in the 2010 Boston Celtics.
Individuals win games - Teams win Titles. Rajon Rondo vs Derek Fisher
As we have seen in every game so far, as Rondo goes, so go the Celtics. The Celtics need the aggressive and active Rondo that we saw in games 2 and 5. If Rondo is aggressive and can hit the shots that the Lakers give him. he gives the Celtics a good chance to win this game.

Paul Pierce vs Ron Artest
Paul Pierce came up big for the Celtics in game 5. He completely out played Ron Artest on both ends of the court. The Celtics need another big game from their captain to close the series out with this game. Getting Ron frustrated so that he makes mistakes, as he did in game 5 is even better.

Kevin Garnett vs Pau Gasol
After saying that KG had lost a step following game one, Pau Gasol has been out played by the old and step slow KG. KG must continue to keep Gasol away from his spots. If Gasol finds his manhood again and starts scoring inside and grabbing rebounds, it could make it hard for the Celtics.

Defense - When the Celtics play their team defense, it is very hard for any team to beat them. When the refs call the game too tight and key players pick up early fouls, it tends to take them out of their defense early. Hopefully the refs will let them play in this one. Regardless of how the game is called, the Celtics can't falter on defense. They must make that a priority as they have won all 3 games so far with defense. They must continue to play that swarming team defense that has gotten them to this point.

Play Team Ball - The Celtics must play as a team. They have to run the offense and move the ball to find the open man. They can't lapse into hero ball as the Lakers so often do. They have to play team defense also and each player has to fill his role. The best TEAM will win this series and the Celtics give themselves a better chance of winning when they play as a team. There is a poster in the locker room that each player looks at as they head to the court that says "Individuals Win Games - Teams win Titles." The Celtics must take this to heart and play as a team on both ends of the court.

Bench Play - The Bench must continue to give the team a boost when they come in. Sheed is very important and hopefully his back wasn't aggravated by the long plane ride. In game 4, it was the play of the bench that won the game down the stretch, playing against the Lakers' starters. In every game, the bench has been able to hold their own and even increase a lead when they came in. The energy and fresh legs off the bench will be key once again in this game, especially with the travel and just having one day off.

X-Factors
Officiating and Energy and Hustle and Bynum's knee
There is much fear that the officials will heavily favor the Lakers in this game. If Tim Donaghy is right, the league would benefit from a game 7 and to get a game 7, the Celtics must lose game 6. Hopefully the refs will allow the players to decide the series and let them play. The Celtics have proved that they can win in spite of poor officiating as long as they play their game and win all the hustle stats.

Bynum's knee is definitely an X-Factor. He played over 30 minutes in game 5, but because of the knee, he was a step slow all night and was basically a non-factor. The announcers said that he was unable to get a cortisone shot before game 5. He will probably be able to get one before this game and that may increase his effectiveness. An ineffective Bynum gives the Celtics a big advantage inside and on the boards.