The Celtics are at the half-way point of the season heading into tonight's game against Utah, and their record stands at 32-9, which is a 4 game improvement over last season when they were 28-13 at this juncture.  Of course, last year's record was marred by the horrendous 7-8 skid that included two 3-game losing streaks that were incurred after their big win in Orlando on Christmas 2009.  Funny thing is that the Celtics were 23-5 after Christmas both this year and last - can you spell c-o-n-s-i-s-t-e-n-c-y?

Overall - it's been a no-brainer in stating that the team has proven to be stronger this season over last.  Perhaps the best example is how the Celtics survived Kevin Garnett's time-off due to his recent injury, which actually occurred in a similar timeframe last year.  The Celtics were without KG from Dec 29th to Jan 21st last year (hyper-extended knee), and then Dec 30th to Jan 17th this year (calf injury).  The difference was that the team was able to go 6-3 in KG's absence this year versus 4-6 last year.  I'll explore the "vive la difference!" in another article.

Without further ado, let's dive into the box score numbers through 41 games.  The following graph has been assembled utilizing Dave Berri's Wins Produced (WP) to come up with the all-encompassing metric of the Celtics performance.  The WP predicted using Berri's formula is 32.9 this year versus the actual 32 wins, and the WP predicted last year at this point is 30.3 versus the actual 28 wins.  Overall, not bad in forecasting the wins, but be forewarned that the folks over at APBRmetrics forum will swear that it has it has an unreasonable bias toward rebounding . . .  .  The chart below summarizes the WP for each of the Celtics Big Four and for the rest of the team. 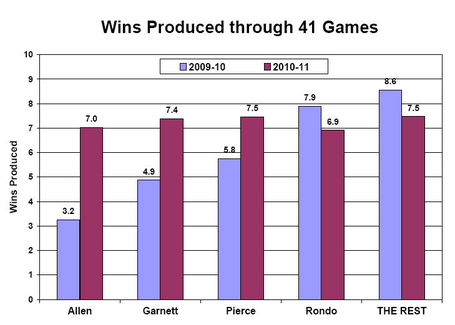 THE BIG FOUR GET BIGGER THIS YEAR

Throw out any preconceived notions that performance declines with age, as Ray Allen, Kevin Garnett, and Paul Pierce continue to get better and Rajon Rondo provides the argument that there is a Big Four on this team.  The WP for each of the Big Four in the first-half of this season has generally increased over the first-half of last year.  Yep - these guys are good, and account for 29 of the teams 32 WP this year according to Berri's formula, which compares to the Big 4 totaling 22 WP of the total last year at this time.

Ray Allen:  The story here is that his shooting percentages are off the charts with an increase from 35% last year to 47% this year from 3-point range.  The tear that Ray is on, at least before the Detroit game, is well-documented.  Additionally, Ray has the largest WP increase from last year and he's just defying the odds at age 35 as he approaches taking the all-time three pointers made record from Reggie Miller.  Keep it up Ray!

Paul Pierce:  PP's mid-range game has skyrocketed with a shooting percentage from 10 to 15 feet out that leads all starting small forwards - even Kevin Durant (see http://www.hoopdata.com).  Pierce has also decreased his turnovers by 0.5 per game, and we've seen how locked in Pierce has been during the 4th quarter.  As stated below, Pierce is benefiting from his teammates play and the Pierce-on-five drill is becoming a distant memory along with the Celtics' ebb in the early 2000's.

Kevin Garnett:  Similar to Rondo, KG has matched Ray and Paul in the wins produced despite missing 9 games.  He's been the rejuvenated monster he was 2 years ago before his injury, and continues to be vital to the Celtics' outstanding defense.  The fact that he's still a top 10 ten power forward while he's turning 35 in May, and seemingly increasing his efficiency after a serious injury two years ago, is no doubt encouraging for the post-season this year.

Rajon Rondo:  You have to step back and look at Rondo's reduction in points per game from 14.1 to 10. 7 through the 1st half of the season, and realize that Rondo's scoring doesn't matter.  His assist totals have almost become legendary and increased from 9.6 to 13.2 per game.  When you see what Ray and Paul are doing shooting-wise and the rejuvenated Garnett and Shaquille O'Neal, you have to recognize the scoring is indeed assisted by Rondo.  Pinch yourself and ask what is the NBA going to do when he starts shooting 3's and Free Throws with the accuracy of an all-star.

THE REST:  There is an interesting story when looking at the rest of the players and the WP of 7.5 this year compared to the 8.6 WP in the first 41 games last season.

Kendrick Perkins was a huge factor for the Celtics last year, and despite the "oohs and awes" that Shaq has been getting while holding down the starting Center spot, Perkins was quietly the unheralded hero before he slowed down a bit in the 2nd half of the year.  Perk's 5.3 WP is the highest WP of the remaining Celtics players (non-Big Four) through the 1st half of the last two seasons.

The next two highest WPs are garnered by Marquis Daniels and Shaq this year.  Each come in with a WP of approximately 2.2, and both have been amazingly reliable compared to what they did last year.  Basically, between the Big Four, Shaq and Daniels' box score stats, you account for the entire total of the Celtics' wins this year . . . and yes, that is leaving off Glen Davis and his lowly total of 0.2 WP.

Okay - you can say that stats lie - as your eyes tell you that Big Baby is having a career year being the first guy off the bench and filling in for the injured KG.  But look again, as his production is strictly tied to the increased minutes he's received this year - and increase from 16.8 mpg to 30.7 mpg.  The situation is that Glen Davis is a power forward/center for this team, and at that position, when you only average 5.4 total rebounds per game with 30.7 mpg, that hurts.

So here's to Glen getting more focused on the boards and becoming less the focus of the offense going into the 2nd half.