Ray Allen's career total for threes made now stands at 2,552, and he only needs 8 more threes to tie Reggie Miller's all-time record.  At his current average of 2.5 threes per game, he could very well break the record four games from now against the Lakers at home on Feb 10th.  But then, Ray has been known to make as many as 10 threes in a game, so who knows - if he really goes off - it could happen against Dallas this Friday, or Sunday against the Magic or in Charlotte on Monday.  But I think against LA in Boston would be perfect, given the rivalry that Ray has had with Kobe Bryant after they each entered the NBA draft in 1996.

You don't hear the term "from downtown" that often anymore, but you would if Johnny Most was still broadcasting games featuring Ray Allen.  According to ESPN, the phrase "from downtown" was coined by Johnny Most in the 1960s, which precedes the NBA establishing the three point shot in 1979.  "From downtown" was popularized by other NBA announcers in the early 1980s, but please let me know if you think this is Johnny Most's term or not, because I can't trust Hunter S. Thompson's recollection of such facts.

Ray may have the notoriety as the Celtics premier 3-point shooter, especially since he's shooting a career high 45.8% from downtown this season.  However, not to be ignored, Paul Pierce and his respectable 42.0% 3-point shooting tweeted on Monday:

Indeed, whereas Ray Allen is set to smash Reggie Miller's all-time NBA regular season record within a week, Paul Pierce holds the record for threes made as a Celtics' at 1,538 - and Antoine Walker at 2nd isn't even close with 937 threes.  Interestingly, Ray Allen is projected to pass Larry Bird's 3rd place 649 threes made in 6 or so games.  What is remarkable is that Larry took 13 seasons to garner his total, and Ray is only in his 4th season as a Celtics.  Bird wasn't a volume 3-point shooter by any means, but he has his place as being one of the best clutch shooters despite only having a career 37.6% 3-point shooting average.

What Team Should Claim Allen's Legacy?

The question I ask is, just how endeared are the Celtics fans to Ray Allen and on the flip-side, Ray Allen to the Boston Celtics?  Since Ray Allen is a UConn alum and lives in Connecticut, he claims New England as his home.  The fact is, even though he picked up and moved frequently growing up as an "Army brat", he apparently loved the Celtics as a kid.  Check out this darling photo of kid Ray in Jo Jo White's No. 10 Celtics jersey http://bossip.files.wordpress.com/2011/01/ray-allen.jpg?w=324.

Ray played a lot of ball for the Milwaukee Bucks and the Seattle Supersonics, and his three point record will stand as a result of making a vast majority of them with the Bucks and Supersonics (75 percent of his career total).  He made most of his threes with MIL (see below) where he accumulated the most regular season minutes by far (46% of career minutes).  He was most productive with Seattle when he was an All-Star for 4 consecutive seasons and averaged 24.6 per game compared to his average of 19.6 with MIL and 17.3 points per game with Boston.

Ray's Boston Celtics legacy seem more akin to icing on the cake.  With each productive 80 game season he has this late in his career, he embodies that fine wine in the eyes of the Celtics that seems to improve with age.  Jeff mentioned how the trade to get Ray and Big Baby for Jeff Green, Delonte West and Wally Szczerbiak seemed questionable at the time.  Ray was on the "heels" of an uncertain ankle surgery, but proved to have some lasting value making that trade a no-brainer.

Last year, a plethora of Celtics fans rumblings of "trade Ray" came to a crescendo as the trade deadline approached.  Personally, I thought such talk was unconscionable.  But at the time, Garnett was limping, Sheed was frustrating and it seemed that the Celtics Big Three's best days were over.  In that scenario, Ray presented the only viable trade chip for the Celtics toward building for the future.

Fortunately, Ray has maintained his "poetry in motion" this season.  With the way the Celtics are sharing the ball and finding Ray at an increased clip, it is sheer joy indeed.  To emphasize how special this season where he's shooting a career high 45.8% from 3 point, Ray has career 3-point shot percentages of 40.6% with MIL, 38.6% with SEA, and 40.1% with the Celtics.

Interestingly, Ray has also stepped up his game his 2-point field goal percentage while with the Celtics.  It was steady at around 47.5% while with MIL and SEA.  With the Celtics, his mid-range and close-in game has increased to a whopping 52.9%.  Consequently, Ray's legacy of fine shooting cannot be restricted to just his 3-point acumen.  Ray's ability to dunk has even gotten some notoriety - see this clip from Ball Don't Lie.

So indeed, Ray is defying the odds and just seems to be getting better at the ripe old age of 35.

The defining factor for Ray as a Celtics guy has no doubt been his playoff experience.  He has logged the most playoff minutes, points and championships while with the Celtics versus his previous teams.  You get a sense of when it comes to his playoff experience, how his Celtics career blows away anything he sniffed with MIL or SEA by the charts below. 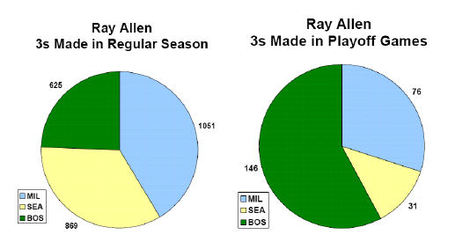 Ray Allen has 253 career threes for playoffs, and should vault past Chauncey Billups and Robert Horry this year, given he has averaged about 50 threes for each of the Celtic's last three playoff runs.  At that point, he will be battling Kobe Bryant, who currently has 263 playoff threes, in pursuit of Reggie Miller's career playoff record of 320.

In closing, I offer the slo-mo presentation of Ray's Finals single-game record of 8 three-pointers made against LA in game 2 last June as an ode to Sugar Ray's sweetness with the Celtics.  Those still playing the game, this qualifies as an instructional video as well, as Ray's form is consistently perfect: