Rondo’s Free Throws: Much Ado About Nothing

Share All sharing options for: Rondo’s Free Throws: Much Ado About Nothing

Doc Rivers had a quote after the Sacramento game a week ago in which he said the team had challenged Rajon Rondo to step up his game, essentially telling him to Get to the Free Throw Line More.  From The Herald:

Rivers said. "We're staying on him. I'm trying to get him to get to the free throw line as much as possible. Just keep driving, keep attacking. My challenge is 10 (free throws) a game. I think in the second half of the year that's really important for him - just see how many times he can get to the free throw line, because I think it would be great for his confidence. It'll be great for our team's confidence, and we know when the playoffs start that's going to be something that he'll have to do. . . .  [10 free throws,] that's a high number, but it'd be nice. We're trying to change his mindset."

Subsequently Elrod Enchilada at Realgm.com penned the The Rondo Paradox where he admonished the Celtics' point guard:

". . . the deep flaw in Rondo's game is his unwillingness to draw fouls and get to the free throw line.  Note, the use of the term "unwillingness," rather than "inability." Perhaps because Rondo is a poor free throw shooter, he avoids putting himself at the line. In combination, it has become a gigantic and growing cancer in his otherwise astounding game. . . . Great players learn to draw contact like heat-seeking missiles as they enter the lane, and still get their shots off. Rondo generally enters the lane only when he can get to the rim untouched, and he will throw up a weak shot before drawing a foul."

As noted on a Celtics Blog thread on Rondo's Increase Aggression, Rondo seemed to have responded to the challenge by Doc, as he's gone 12 for 14 from the charity stripe in the last 4 games and has doubled his season average of 1.9 free throw attempts per game (FTAG) during that stretch.  For comparison, his career average is 2.8 FTAG, so yes, Rondo is shooting one less free throw a game this season, but is that a big deal?

I am skeptical that Rondo really needs to shoot more free throws for the Celtics to be successful.  Case in point is that the Celtics have only gone 2-2 in the 4 games since Rondo was challenged.  The win in Sacramento, where Rondo had 17 points, and the win against Orlando, when his scoring surge in the 2nd half and total of 26 points, are examples where his scoring was instrumental in the victory.

But does Rondo really need to create contact more when he's going to the hoop?  It seems counterproductive to me as the guy is already laying it all out there as it is when he goes to the rim.  He's distributing the ball like a freak, and despite his career low in FTAG, he has a career high in 12.4 assists per game - this is almost double his career average of 6.8 assists per game coming into this season.  He's obviously doing other things to help the team, enough to get selected to his 2nd straight all-star game.

But certainly by Doc's comments and the Elrod Enchilada follow-up, you would think that Rondo doesn't get it.  I respectfully disagree.

The "10 free throws a game" comment by the Doc is more about Rondo taking more shots in general, whether it is in traffic or not.  A litmus test for a Celtics victory it is not, especially if you take a look at the splits for Rondo's FTAG in Celtics wins and losses (courtesy of www.basketball-reference.com):

Then there was the accusation that the Celtics need him to get to the free throw line during the playoffs in order for the Celtics to win.  This is just not true based on the facts, as during the last three playoff runs, the Celtics are 2-2 when Rondo takes 10 or more free throws. 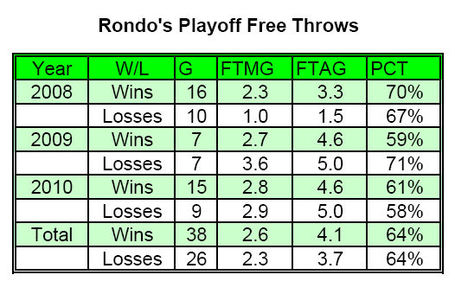 The last two playoffs, Rondo actually got to the line more during the Celtics' losses versus the wins.  So as some have done, you can pick out some individual games and critique that Rondo didn't "play the right way" and "wasn't aggressive enough" for the team to win, but the numbers certainly don't justify calling out Rondo to shoot more free throws a game in order to will the Celtics to victory . . . as Doc had suggested.

We all know Rondo.  He's not a high-volume shooter and that has never been his role on the team.  It may never be even with the Big Three are gone.  When an opponent makes a mistake and thinks they can take advantage of Rondo's inability to shoot well from mid-range, they usually fall in a trap.  While it is true that Rondo is not a great mid-range jump shooter (see www.hoopdata.com), Rondo is able to leverage his slashing game where he shoots 67.5% AND can make the uncanny pass to the open guy that can shoot well.  ADVANTAGE Rondo.

In closing, I caution anyone to question Rondo directly on such inane matters, and quiz him with stumpers such as "Are you getting to the line enough?", "How are you going to improve your free throw shooting?", and especially "How's the Jumper".  I'll save you the trouble, as Kevin Henkin and numerous others have found out, in Rondo's mind "It's fine" . . . period over and out.