By The Numbers: Is Rajon Rondo 'Off' Lately?

Share All sharing options for: By The Numbers: Is Rajon Rondo 'Off' Lately?

True or False: Since the Perkins trade, Rajon Rondo has not seemed to be quite the same player.

This was a dilemma I posed to myself last night after seeing some of the post-game comments in the post-game recap. Some of the stances taken both by posters defending and by posters attacking Rondo struck me as a bit one-sided. I know what I have seen with my own eyes, and to that end I just haven't been impressed by Rondo's play lately. That is not to say that he's been 'bad' in a league-wide context, but rather, I'm saying the Rondo we've seen since the Perkins trade has been 'bad' compared to the versatile speed monster that wreaks havoc on both sides of the court that we've become accustomed to since he first really 'broke out' in the Bulls' playoff series of 2008-2009.

But me, I'm not much for numbers. Math was never really my strong suit, and I form most of my opinions from snap judgments of probably immaterial or misunderstood (by me) sequences I think I see during games. A bad pass here, a misread there...a fumbled hand-off or a broken play and a quizzical look, and suddenly I'm thinking..'What's wrong with Rondo?'

But, some of the things I have been reading from Celticsblog users have kind of maintained that Rondo's numbers do not bear out the hypothesis that his play since the Perkins trade is down.

So, why don't you strap on your nerd glasses and come on a truckin convoy of knowledge with your old friend Tom, and let's see just how Rondo has been doing since the trade.

Statement One: Since The Trade, Rajon Rondo Is Playing Below His Usual Standards

Since the trade the Celtics are 5-2, and in those 7 games, Rajon Rondo's per-minute performance is down in nearly all the key areas. While his minutes are up, his efficiency is down substantially over the last 7 games.

*-denotes a per-36 minute stat. In the above number set, the minutes are there only to show how many Rondo is playing per game, the rest of the stats are on a per-36 min scale to ensure even comparability.

Or, if you prefer graphs: 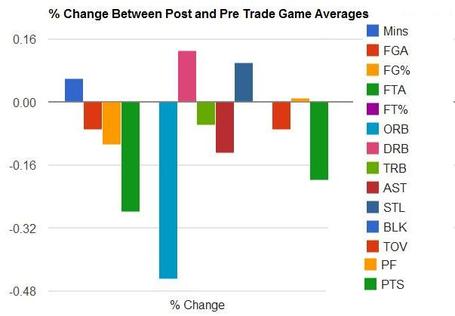 Rondo's production at first looks like it took the biggest hit in his 3pt shot, but those numbers are skewed from the get-go, as Rondo has only attempted one 3pt shot since the Perkins trade.

One thing we can learn here is that Rondo is scoring significantly worse. While his attempts per game are relatively static (only -7%), his FG% is down, as are his Free Throw Attempts (-28%). One possible deduction we could make here is that this is an indicator that Rondo has been significantly less aggressive, and has avoided driving to the hoop, which would explain his fewer trips to the line, and his worse shooting % (as Rondo would be using more of his field goal attempts on jump shots).

Rondo's assists are also slightly down in a per-minute context. Before the trade, Rondo was averaging 11.5 assists per 36 minutes. That number puts him for second in the league among players who are going to total 500 minutes of play on the season. However, since the trade Rondo's per game numbers have stayed high (11.1 assists per game over his last 10) yet this not representative of his total contribution on the court. The number is slightly inflated by his playing more minutes, and actually his per-36 minute production is down 13%, which while still an elite statistic if compared to the rest of the NBA (puts him right behind Jose Calderon and just ahead of Chris Paul for 4th in the league), it is below the world-beating assist numbers we're used to seeing from Rondo this season.

This could also be explained away by a lack of aggression on Rondo's part on the offensive end. If he was less eager to get into the paint, he would have less drive and kick opportunities.

Rondo's offensive rebounding numbers have taken a significant dive since the trade, but this does not concern me much because I think this production is being replaced by another player, and is becoming redundant. Although Glen "I only rebound offensive boards" Davis is currently sidelined with a bum knee-cap, Nenad Krstic has revealed himself to be no slouch on the offensive end getting boards either. Just last game, against the Clippers, Krstic got 6 offensive boards, which is the total number off offensive boards Rondo has gotten over the past 7 games combined.

Statement 2: Rondo hasn't been right since he returned from injury in January, and the recent slump is a product of that.

Rondo sat out 7 games from mid-December to early January with a sprained ankle and some (myself included) thought maybe he came back a little prematurely. However, the thought that maybe Rondo's recent drop in production has any relation to a tentativeness born from that injury has no substance in the numbers.

If we can agree that Rondo's season has had three distinct periods, this next study will be easier. Let's say period 1 is "Pre-Injury", or the first 20 games Rondo played in before he went down for a few weeks in December. During this period the Celtics went 17-3, and Rondo sparked quite a bit of talk, even some MVP mentions that nobody took seriously. Period 2 will be "Post-Injury, Pre-Trade", which includes the 24 games after Rondo returned from injury but before Perkins was traded. During that time the Celtics went 17-7. The last period will be "Post-Trade", which will only include the last 7 games since Perkins was traded. Admittedly this is a small sample size compared with the previous 2 periods, but if you don't like it...write your own 1100 word entry.

The first would be scoring. In both the first and second periods the number is around the same (roughly 10.5 points per 36 mins), but in the third, the number drops. Rondo's scoring per minute did not drop significantly in the 24 games he played after his injury but before Perkins trade, so it would not follow that his recent drop in scoring is related to his injury at all. It would seem that the drop in the last 7 games (the third period) is unrelated to the injury.

The second discrepancy is in Assists-Per-36 minutes and that one is a little less supportive of the theory that Rondo's passing is down in the past 7 games. It would instead indicate that while Rondo's assist numbers are down significantly in both the second and third periods from the first period, his assist numbers from the second to third period are less than 1 assist per 36 minutes, which is a pretty negotiable difference (less than 7%). So while it is plain to see that his scoring is down over the past 7 games, his passing may not be in the dire straits I initially thought.

The other odd thing the chart above can show us is that Rondo's turnovers during the past 36 games have actually gone down, and are at their lowest point of the season. If Rondo's funk was born of just being 'bad', his turnovers would go up, wouldn't they? However his highest turnover rate was during the first part of the season, when his assists were the highest..so maybe we have to come back again to aggression?

Let's look more at this through some advanced statistics!!

Assist Ratio: the percent of possessions that a player has that ends in an assist, instead of say a field goal attempt, a turnover, or a trip to the line.It is useful in seeing how often someone opts to pass vs other options.

Turnover Ratio: Same as assist ratio, but instead measures how often a player's actions end in a turnover. Good for looking at efficiency.

True Shooting %: Measures a player's shooting percent while also factoring in trips to the line. A more accurate representation of scoring success than just FG%.

This just ices the argument for me. Rajon Rondo's assist ratio in the second and third periods are exactly the same, and his turnover ratios are the same in all three periods, while his True Shooting % has dropped progressively since December 12th, and significantly in the last 7 games. I think I am ready to make my verdict.

True or False: Since the Perkins trade, Rajon Rondo has not seemed to be quite the same player.

Rajon Rondo is not any less sharp, cerebral, or more careless than he has been previously in the season. HIs turnovers are actually down, and his defensive rebounding numbers are even up.

His scoring however has taken a substantial hit in efficiency and volume, while his assists seem to have dropped off slightly.

The real difference seems to me that Rondo has lost a substantial bit of aggression, first after he returned from injury in January (which is to be expected) and now significantly after the Perkins trade, which is a little more complex. You can see this by the decline in field goal attempts, this decline in field goal percentage (meaning he is taking fewer high % shots) and the decline in true shooting % and Free throw attempts, meaning he's getting into contact in the lane less.

And Now, The Epilogue

Let's not look to much into all this though. Sure, some idiots will invest hours of their time and thousands of words of text looking into Rondo's recent slump, but I imagine those idiots probably aren't worth listening to (haha, you made it this far, too late!).

Let's remember that Rondo has always been a bit streaky. We'd be lucky if he could sustain his triple double potential over an entire playoff series, let alone a 20 game stretch in February or something. Rondo is going to have down stretches, its just the ways of the game.

And while it is not worth it to pretend like Rondo's play will not improve, it is also important to remember these times when Rondo is putting up 20 assist games and the streets are running wild with pretty bounce passes. Rondo is a streaky player, and while his passing seems to be a gift that will never leave him, his own effort level will decide whether his game is one for the ages that includes not only distribution, but also scoring and rebounding, or whether it is merely a complementary piece that can 'only' be counted on for 38 minutes and 10 assists a night.