Share All sharing options for: Thibodeau Making a Big Defense for da Bulls

It's time to assess what Head Coach Tom Thibodeau has done for the Bulls, and conversely, the effect of his absence from the Celtics assistant coaching staff.  After all, with a little less than a quarter of the games remaining this season, the Chicago Bulls have drawn into a virtually tie with the Boston Celtics for top honors in the Eastern Conference.

After starting the season off 9-8, the Bulls have won at a 79% clip going 38-10.  After the slow start, Thibodeau has instilled his defensive attitude despite the absence of Joakim Noah for a large part of the season, and the subtraction of their sometimes all-defensive guard Kirk Hinrich.   Going from last year to this year, everyone on the Bulls roster (including Scal) has had a significant improvement in their Defensive Rating (DRtg), such that all signs point to Coach Tibs as being the one to credit with the turnaround.  Noah is the team leader with a DRtg of 96.  The  player with the worst DRtg of 103 is 3-point specialist Kyle Korver, but literally everyone has improved defensively from a box score perspective.  Most prominent in the equation has been Derrick Rose who has upped his steals, blocks and defensive rebounds by a good margin over last year, while including the 3-point shot to his offensive arsenal.

As discussed on SB Nation's NBA website, it has been bantered about that Thibs may be the Most Valuable Free Agent snagged last summer.  Not Lebron James or Chris Bosh signing with the Miami Heat, not Amare Stoudemire signing with the New York Knicks, not the re-signing of Nowitzki, Pierce/Allen or Johnson with their respective teams, or even the Bulls signing of Carlos Boozer.   Indeed, from the Bulls perspective, the most under-rated "Decision" made last summer was Thibs moving over to the Windy City.

Any Most Valuable Free Agent candidate should be judged by the improvement in the team’s winning.  As such, the table below provides additional support for Thibodeau’s arrival as being something special for da Bulls : 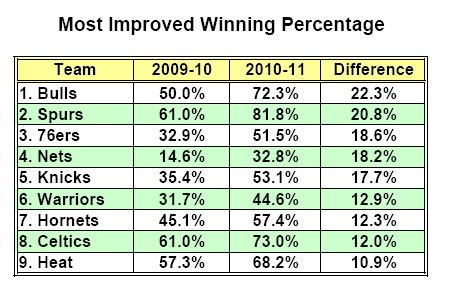 Da Bulls and da Spurs are the turnaround leaders for the season thus far, with a bunch of Atlantic Divisions team also staking a claim, lead by the 76ers and the Nets, as well as the Knicks and Celtics.  The Heat, with all their new star power, barely crack the top 10 in most-improved.  Most of the leaders on the list, like the 76ers, Nets, Warrior, Hornets and Celtics, are a result of the recovery of their key star(s) from injury, and has had little to do with player acquisitions or coaching changes.  But when it comes to the Bulls and the Spurs, the coaches have to get the credit, as neither team had much of an influx of talent.  The Spurs essentially re-invented themselves this year to keep things interesting, and Thibodeau seems to be the difference for Chicago.  Boozer’s injury showed that he was really just another cog in the wheel for what the Bulls have going on, and simply can't be credited for the Bulls' turnaround.

Derrick Rose made a key testimonial with regard to Thibodeau’s influence on the team:

"He's crazy, man.  We talk all the time … He’s always on the edge.  He makes you want to play hard.  He’s a great teacher and he has helped my game a lot."

Rose is also the same guy that is widely considered to be the front-runner in this year’s MVP race, so that’s saying a lot about Thibs coming from the team’s own floor general.

"I don’t think there’s one player in here that would say that Thibs isn’t the best X’s and O’s coach they’ve ever played for.   [When it come’s to managing personnel], he’s been consistent.  He treats everyone equally. He gets on Derrick just as much as he gets on anybody else, if not more. When he holds the best player to a high standard and that player takes it, the rest of the team does, too."

Korver also said "If you’re not doing it right, he just doesn’t play you", and you can point to the benching of Carlos Boozer for the fourth quarter of a game in January as proof of that.  So, similar to Doc, Thib’s has made the occasional tough call to yank a star if he saw a lack of lack of effort (remember Pierce and Doc not seeing eye to eye pre-ubuntu).

SB Nation - Chicago recently had this to say about da Bulls new head coach, who they Rank No. 1 amongst coaches/general managers in sports-crazed Chicago:

[Thibodeau has] been able to maintain the team's success through two major injury losses: Carlos Boozer didn't start the season until Dec. 1 and Joakim Noah didn't play for more than two months following a Dec. 15 win. . . . Granted, Thibodeau is enjoying the fruits of a MVP-caliber season from Derrick Rose and solid efforts from Boozer and Luol Deng.  But for a team that currently ranks 17th in points per game, well below league average, something else must be clicking -- and that's the defense, Thibodeau's speciality.

For Celtics - No Thibs, No Perk, No Problem

Hands down - Thibodeau has been a difference maker for the Bulls.  But it becomes more difficult to attribute any negative effect of his absence, as the overall team success of the Celtics’ this year has improved.

Conventional wisdom was that Tom Thibodeau was Doc Rivers crutch when it came to doing defense right.  As discussed here at CelticsBlog, for the combined regular seasons from 2007-08 to 2009-10 during Thibodeau’s tenure, the Celtics were the No. 1 ranked team in defensive field goal percentage (DFg%), the No. 1 team in DRtg, and No. 1 in fewest points allowed (PtsA).  That’s defensive domination.

But as it turns out, Doc apparently "gets" the meaning of defense too, as the team defense has actually improved this year compared to last, with the improvement comparable in magnitude to what Thib’s Bulls have realized. 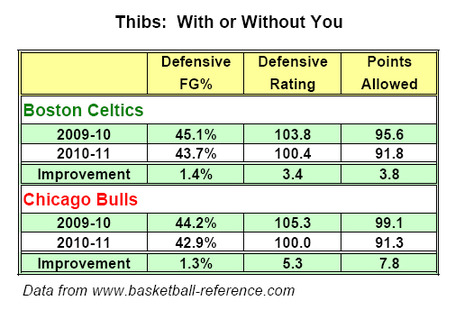 Obviously, a lot of the Celtics defensive improvement has to do with Kevin Garnett playing full-time and being healthy.  Garnett has always been the key guy in making sure the defense is operating "on-a-string" when it comes to playing the necessary help defense . . . and Garnett’s yapping is actually a favorable trait when it comes to communicating on the defensive end.  He’s a shoo-in on my 1st team all-defensive and should cop another Defensive Player of the Year (DPOY) award, but will likely be runner-up to Dwight Howard as Howard attempts to three-peat for the DPOY award.

Considering that the Celtics’ No. 3 defensive guy after Garnett and Rajon Rondo, i.e., Kendrick Perkins, was pretty much missing all this season, and subsequently traded for more offense, the bottom proved not to drop out for the Celtics defense.  Aiding the Celtics defensive coaching in Thib’s absence has been Larry Frank.  Frank, who is second in command to Doc, is supposedly a pretty defensive-minded coach as well, even going so far as to advertise his Close-Out Defense philosophy within a recent DVD that he authored.  To Garnett’s credit, Franks says that on defense you have to talk, and Franks says "the Boston Celtics are an unbelievably loud team!"

Similar to the Bulls’ situation, everyone on the Celtics’ roster has also had a significant improvement in their DRtg going from last year to this year.  Garnett is the undeniable team leader with a DRtg of 95 and the player with the worst DRtg of 104 is the NBA all-time 3-point shooter Ray Allen.  Who’s going to complain about Allen when his effective field goal shooting percentage is at a career high this season.  But guess what, Allen’s DRtg is the 2nd best of Ray’s entire career.  Not a bad testament to whoever wants to take responsibility, whether it's Doc, Larry, or Kevin.

Thibodeau as the "MVP of the free agent crop from last summer" appears to have some legs.  This of course also begs the question, should the Celtics be kicking themselves for not having steered him to a Western Conference team, or thanking themselves for the 3-0 spanking his Bulls have inflicted on the Miami Heat this season.

The Heat were after all the preseason Eastern Conference favorites. The way things are going, either the Bulls or the Celtics will likely be doing each other a favor by dusting up the Heat as courtesy for the other, as the Heat will have to go through either Thibodeau or Rivers before they can even think about making the Conference Finals. . . .

Note:  Defensive Rating (DRtg) is an estimate of points produced per 100 possessions by the opponent.