The Celtics Conundrum with the Other Guys

Share All sharing options for: The Celtics Conundrum with the Other Guys

The Celtics' Big 4 of Rondo, Allen, Pierce and Garnett have had been playing a bit of roulette with the 5th guy this season.  For the three season prior to this, the Celtics starters with Kendrick Perkins enjoyed quite a run - something about never losing a playoff series together . . . but can they still get it done without Perk?  In addition to the playoff success, the Big 4 + Perk also played some impressive regular seasons together.  In 2007-08 and 2009-10 the Celtics starters had the 3rd most minutes as a unit, and had the highest on-court scoring differential (plus-minus).  2008-09 was even better as the Celtics starters also had the most minutes of any group, as well as best plus-minus.  Nobody relies more on their core of four to six players more except for the Lakers, Spurs and the Heat - all which happen to be successful teams this season.

It so happens that the Celtics starting unit has carried on the uber production this year, albeit with moving parts at the center position.  Perk had some fierce competition in the likes of the O'Neal brothers, and as shown in the table below, Shaquille O'Neal's fit with the Big 4 has not gone unnoticed by Danny Ainge, as it is assumed that Shaq's dominance - when healthy - greased the wheels for the Perk-Robinson for Jeff Green - Nenad Krstic trade deadline deal. 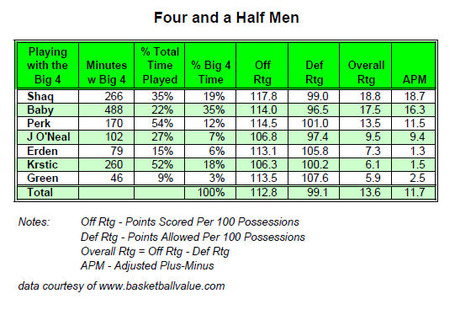 The particular situation that has been gnawing at many a Celtics fan is would the Celtics be better off than the 13-8 record they've had with Krstic if this trade was not made?  The Celtics were 4-3 with Perkins starting this season before he strained his knee and was subsequently traded on February 24th.

More importantly, with the playoffs less than a week away, will the Celtics be able to flip the switch like they did last year?

The Celtics are obviously hoping that they have more than Nenad Krstic and Big Baby Davis for their center rotation when the playoffs begin.  However, as a Celtics fan, you have to put your eggs in the Big 4 basket and realize they enjoyed quite a bit of success without Perk on the floor with them for the majority of the year.  Thank goodness for the health of the Big 4 this year.

As shown on the table above, they've been able to adapt fairly well to the seven players who have gotten significant floor time with them:  Big Baby has accumulated the most court time with the Big 4 by virtue of his good health, and he's solidified the Big 4 +1 unit almost as well as Shaq has. Jermaine O'Neal appears to have the same net impact (Overall Rtg) as Perk.

The surprising thing regarding "The Other Guy" is how the offensive production worked so well with the otherwise offensively inept Perkins (Offensive Rating = 114.5).  Does familiarity breed success here for the Big 4, with Perk spelling comfort on the offensive end with the setting of his wall-like screens, just knowing where to be, etc.?

To be fair, Baby, Semih Erden and Green have also about the same Off Rtg as Perk, and Baby and J O'Neal had better Defensive Rating numbers.  But everyone knows who's the toughest among these 5th wheel guys . . . it's Perk by a mile - and that what you are looking for come playoff time.

If you stack Perkins against Krstic, the results are curious. You can make your own interpretations, and yes this is a relatively small sample size for this season with Perk only playing 12 games and Kristic 21 games with the Celtics this season.  Regardless, with Shaq out and Jermaine O'Neal just coming back and being relegated to more of a defensive specialist for the team, Krstic is being used in the rotation essentially the same minutes as Perk would have been.

Krstic is not allowing the Big 4 offense to be quite as productive as it was with Perk, but as the table above shows, in all other combinations of units he plays with, e.g., mixtures of starters and reserves, he has better numbers than Perk did.  Again, it's a small sample size, but I would venture to guess that Krstic is still seeking to find his role in one of the most established 4-player combinations in the league in Rondo-Allen-Pierce-Garnett, and can still be a complementary piece to a championship this year.

Take the Washington game last Friday for example.  When the Big 4 and Krstic were on the floor they had a plus-minus of 27.  All other line-ups ended up with a -10 plus-minus to result in only a 17 point route of the Wiz.  Yes, the bench is lacking he ferocity it needs, but fear not.

If you think about it, this is all about the lack of familiarity with the 10 new players that now sit beside the Big 4 and Glen Davis this year compared to last - there are a lot of new faces and unfortunately time is running out for them to get in synch.

Danny Ainge laid a pretty significant challenge on Doc and the team.  Doc seemed to manage wonderfully earlier in the year when he at least had a familiar Marquis Daniels, a rejuvenated Shaquille O'Neal in addition to Glen Davis anchoring the rotation with the Big 4, but he still had a lot of new faces.

Now the pressure is on the Big 4 to stay crisp on the floor together, and prepare to shorten the rotation for the playoffs to include only the most seasoned players . . . and you have to like the prospect of running with Delonte West, Jeff Green and Glen Davis as the subs, along with Jermaine O'Neal and/or Kristic, pending Shaq's comeback, which has been reduced to the best case scenario of playing on Wednesday against the Knicks.   Really now?