Being Clutch Will Be Key to the Celtics Cooling the Heat

Share All sharing options for: Being Clutch Will Be Key to the Celtics Cooling the Heat

When it comes to beating the Heat, it may be as simple as keeping the game close and then executing in the final minutes.  After all, one of the knocks on the Heat has been that they don't have what it takes to finish out close games.  Last month, Haberstoh at ESPN and Paine at BBR Blog pointed to the Heat's futility in winning games decided by 5 or fewer points.  But there is also the camp that says "poppy cock!" and believes that close games are decided by random events, similar to a coin flip, with the fate determined on the bounce of the ball, an inadvertent foul call, etc.  The quote from football analyst Aaron Schatz has been borrowed frequently for this topic,

However, I suspect that winning against the superior teams dictates a championship team as well.

Below is a graph of the scoring differential during the regular season against teams that made the playoffs.  The Heat were only 21-20 versus the better teams, while the Celtics went 28-14 when facing stiffer competition.  Indeed, the Heat show some vulnerability in the close games with only a 4-12 record, whereas the Celtics are 11-7 when the scoring margin is 5 points or less. 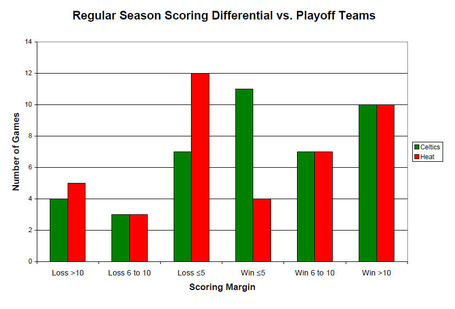 Now if you look at domination of inferior opponents, the Heat have all the aces, as shown in the graph below.  Conversely, as we all know too well, the Celtics frustrate us by "playing to the level of their competition".  The Celtics still muster an 8-6 record in close games, while the Heat generally showed the capacity to avoid playing in close games with inferior teams, managing a 2-2 record.  So do the style of wins suggest the Heat as being the better team in this series? 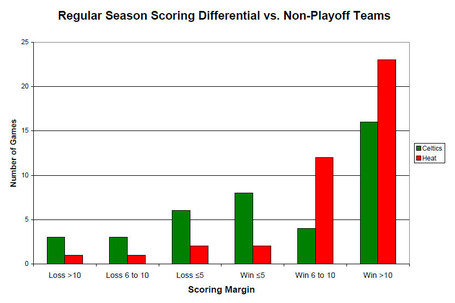 Miami also has the knack of staying steady during the game, with their scoring margins built slowly throughout the game.  According to teamrankings.com, Miami ranks 4th, 2nd, 4th and 3rd best in the average scoring margin for play during each quarter.  The Celtics again have an idiosyncrasy of not having the foot on the pedal the entire game.  The C's are 3rd, 14th, 1st, 10th in scoring margin by quarter.  This translates to the Celtics being lights out in the 1st and 3rd quarters where their starters clearly have control of the game.  But their play is marred by mediocrity in the 2nd quarter - blame it on the bench?  Same for the 4th quarter where the Celtics often have a bumpy road.

What did Phil Jackson say last year during the Finals?

However, there is a sense that the Celtics know what to do if they can hang on during the close games.  For instance, if the Celtics hadn't been "clutch" in games 1 and 2 against the Knicks, and of course if Billups and Stoudemire weren't injured, the Knicks series may been totally different.  The Celtics have clearly demonstrated that they know how to win if given the opportunity late in the game.

So Is Being Clutch Even a Factor?

The ability to win close games sticks in our minds as being the most memorable ones.  Those are the ones that are full of drama with a hero that surfaces to make the game-winning play leaving us with a rush of adrenaline at the end, or sleep-depriving dose of frustration if your team is on the receiving end.  Think Ray Allen in Game 1 versus the Knicks and then Kevin Garnett in Game 2.  Those were special games.  Similarly, the Bruins saving victory against the Montreal Canadians in overtime in game 7 this week was heralded as one of the most memorable of the Bruins playoff history.  How can clutch play not be a factor in separating the champions from the also-rans?

Considering the Heat's Super Friends, it's hard to think that they don't have a 50:50 shot at winning when the game is close.  LeBron James and Dwayne Wade are a scary poison to pick, as they both know how to drive to the hoop and get fouled.  They also are as competitive as any player in the NBA.

82games.com has culled the regular season data for all games with 5 minutes remaining in the 4th quarter or overtime, with neither team ahead by more than 5 points.  Indeed, James and Wade score more in the clutch than anyone on the Celtics.  The pecking order for the Celtics is Pierce, Allen and then Garnett.  Then further down the line we see Chris Bosh and Mario Chalmers being an option for the Heat and Big Baby and Rajon Rondo for the Celtics (remember BBD game-winner against Orlando last year . . .).

The clutch stats don't bear out the fact that the Heat don't have the closers, because they do.  But perhaps it's the other guys on the Heat that give their opponents an advantage during crunch time due to the decrease in talent and/or experience.

What appears to be wrapped up in the close game success of the Celtics versus the Heat is the foul shooting where Allen, Garnett and Pierce all shoot above 85% during the clutch.  Conversely, Wade sits at 73% for his clutch free throws, which isn't all that much better than Rondo's 66%.  Watch out for Chalmers though, as he hasn't missed a free throw in the clutch, and he seems to be coming on for the Heat with Mike Bibby being a non-factor.

I'm going out on a limb and say the Celtics are going to win a couple of close games - and take the series in 6, how about you?