Rondo Not Sitting This One Out

Share All sharing options for: Rondo Not Sitting This One Out

At 7:02 of the third quarter, Rajon Rondo lay on the floor wincing in pain, his left elbow bent in ways it physically shouldn't. As he was walked off the floor, trainers holding his elbow in place, the question was asked, "Now what?"

"Honestly," Kevin Garnett recalled, "I was like, ‘Oh.  Here we go again.'  It seems like we've been hit with the injury bug pretty hard this year. At that point, you just hope that he's all right. I was right there when it happened. I was just trying to get him to relax.

"You see one of your brothers go down, the first thing you think because we were all there when Marquis (Daniels) went down. It's never a good feeling. (It's) someone's father. It's someone's brother, someone's son is on the floor hurt. My first thoughts were just his well-being. I was just trying to get him to calm down and relax. You could tell he was breathing a little bit irregularly. I knew he was hurt.  He's a real tough dude."

It clearly wasn't as serious as Daniels' injury, but you can't blame Garnett for having flashbacks - after all, both injuries could change the course of the season when it's all said and done. But unlike with Daniels' injury, Garnett was able to help Rondo out at least a little.

Paul Pierce's reaction was a bit different than Garnett's. He knew that the show must go on, with or without Rondo - and it was obviously clear the injury wasn't life threatening.

"Everybody else needs to step up," he said.

They did. The Celtics were up 60-50 when Rondo left the game. At the end of the quarter, they had actually extended that lead by a point, and led 72-61. Garnett scored eight points in that span, Pierce three, and Delonte West one.

Still, how long could they keep it up without their playmaker and quarterback? Even if they did somehow find a way to win this game, let's be serious - a Celtics team without Rondo isn't going far.

But something happened towards the end of that third quarter that will go down in Celtics lore.

He came back out.

What?! How is that possible?! We just saw 20 replays of an elbow that literally bent 90-degrees in the wrong direction. 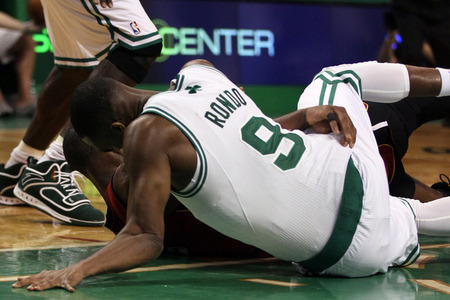 Doesn't matter - this is the playoffs. Rondo stepped his game up last year around this time, but this effort tops it all. It's not one that will show up in the box score.

"I just wanted to play and be a part of it," Rondo said. Regardless of what happened, I felt obviously my shot wasn't going. I wasn't doing much offensively, but I thought I could try to keep the game or change the game's momentum by getting to the ball defensively. I just need two legs for that."

And so he played. With one arm essentially dangling by his side, and the other doing most of the work, Rondo played not two minutes, not four - but all 12 minutes of the quarter, helping the C's maintain their lead over the Heat and hold them to just 20 4th quarter points.

It's still to be determined how serious the injury will be going forth, but for one night anyways, on May 7, 2011, Rondo helped beat the Heat with one arm tied behind his back.