Why is Wyc So Willing To Cancel The Season?

Share All sharing options for: Why is Wyc So Willing To Cancel The Season?

Since the ownership group led by Wyc Grousbeck took over in 2002, they have delivered on everything that former ownership groups did not.  They poured time, resources, and most of all money into the team from the top down.  They hired a GM and stood by him during the lean years which paid off bigtime when Ainge hit the Big 3 grand slam back in 2007.  They promised that when the team was contending for championships that they would pay luxury tax to stay competitive and they were good at their word.  What more could you ask as a fan?

That is why it is so puzzling to see Wyc named as one of the main hardliners in the CBA negotiations and subsequent lockout.

Back in the labor talks of 2005, Celtics owner Wyc Grousbeck would say over and over in the negotiating sessions: The lockout is an investment. Grousbeck smartened up, kept that thought to himself, but rest assured the mindset hasn’t changed. He’s one of the owners believed to be willing to lose the next season, along with Phoenix’s Robert Sarver.

I believe that first comment about the lockout being "an investment" is the key clue to figuring out Wyc's motivation.   The current ownership group purchased the Celtics for a reported $360M in 2002.  According to Forbes, the team is currently worth $452M.  Not a bad return on investment if they were willing to sell the team today.  But they are not willing to sell today, so the answer must reside in the year to year operations.

For further clues, let us look deeper into the Forbes analysis.  (Consider that the data is all from the 2010 season where the Celtics followed up a lackluster regular season with a run to the NBA Finals)

Consider the following graphs (from Forbes): 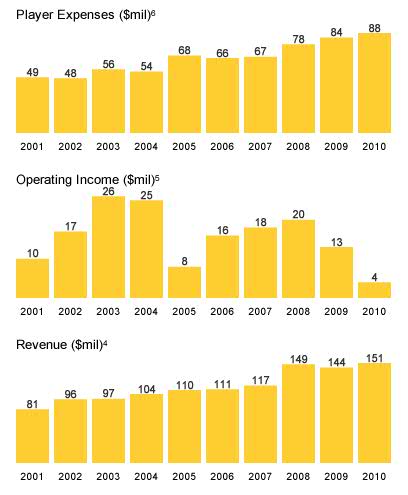 Basically, even though the revenue increased and the player salaries increased at about the same rate, the operating income plummeted to just $4M that year.  Why?  Here are some answers.

Despite the team's success on the hardwood, the Celtics local ratings on cable television took a hit. The average rating on CSN New England fell 12%, to 3.1. Attendance also slipped at TD Banknorth Garden, where the Celtics averaged 18,169 fans per game during the 2009-10 season, 2.4% less than the previous season.

Ticket sales matter.  Ratings matter.  I don't know how reliable these numbers are and we certainly don't know what the numbers were from this past season, but it does show that there is volatility here.

In addition, there are the increasing costs (that the owners have signed up for by the way) of doing business in the NBA that don't have anything to do with player salaries.

NBA Player Salaries Have Been Flat While Other Costs Skyrocketed | ThinkProgress

In real terms, NBA revenues have been flat over the past few years. And player salaries have also been flat. That’s not great. You like to see real wage growth and real revenue growth. At the same time, NBA players earn some of the highest wages in the world and NBA franchise owners are even richer, so basically it’s all good. But while player salary costs are growing at roughly the rate of overall inflation, other expenses are growing at five times the rate of inflation.

(hat tip to Kelly Dwyer for that link on his awesomely titled post "NBA owners make a lot of money, but they spend a lot too")

So what do they spend that money on?  Dwyer gives us a clue.

The players aren't on the hook for what they wear before and after games, they actually get food per diems, they have food brought into the locker rooms both before and after games, they are shipped around the country on private jets going to and back home from road games, and they are given rooms in the choicest hotels at no cost to them. Not a single penny, all covered by the owners. Want to come to your league-mandated charity appearance? A car, hired by the team, will be there at 10:30. Toss in insurance and on-site health care, and you've just covered the tip of the iceberg.

I would imagine that you can add in in-game entertainment (yes, including the Dance team) but some of those costs are also balanced by an apparent increase in sponsorships.  Cutting some of these costs is an option, but the team runs the risk of looking cheap to free agents and fans.  So obviously it is a delicate balance.

For the most part, we've been talking about the Celtics who have a loyal fan base, a huge market, and good local TV deals.  If they can only eek out $4M in profit in a year in which they face the Lakers in the Finals, you can only imagine how the Sacramento Kings and Minnesota T-Wolves are doing these days.

Why should we care about other teams?  Or more specifically, why should Wyc care?  Because the health of all the teams in the league are tied to each other regardless of any revenue sharing that may or may not occur.  If the overall product suffers, so will the individual teams.

Keep in mind, the NBA has contracts to renew with ESPN and TNT after the 2016 season.  That is another uncertainty to consider because they could get more or less in their next deal.  That said, if the owners can lock in lower salaries and restore the image of the league in time for that contract renewal, it could be a huge future boon for all the NBA owners.

Which brings us back to Wyc and the Celtics.  Would they rather A) continue with the status quo model and then send money off to New Orleans to help pay for Emeka Okafor's salary or B) take a bite out of player revenues across the board?

Now you are getting to the root of the matter.  Bottom line: many of the teams mismanaged their business models and the business of the NBA is not always as easy as it seems.  So if the owners are motivated by making money then something has to give.

(A side note: There is some considerable discussion that could be made about what owners should expect from buying an NBA team.  Year to year profits might not even be viable goal for a team looking to contend.  So even though Wyc might be a huge fan willing to lose money to win, he's also an investment banker who wants to see his investments pay off sometime.)

A Different Kind of Window

So maybe the Boston Celtics were going to enjoy a modest profit this year, or maybe not.  Maybe one year less of paying the salaries on the Big 3 without bringing in any ticket sales or other game-day related revenues is somewhere near a wash at the end of the day.  Maybe the ownership group decided that if they have to share revenues, they better first have a lower payroll or else it isn't really worth having a season.

Perhaps they also know that in 2012 the Celtics can react to a new CBA with the flexibility of a lower payroll.  From a purely dollars and cents perspective the Window might actually be opening after the Big 3 leave.  I wonder if Wyc would have a different attitude if the CBA was expiring next year instead of this summer (and Dwight Howard was gearing up for a The Decision TV special).  Again, that's just vague speculation and I hesitate to take any of this to the proverbial bank, but it is food for thought.

Does any of this make me side more with the owners or sympathize with their efforts?  Not really.  It just helps me understand just a little bit better what they are driving at.