Celtics Look to Get Back on Track as they Host Raptors

The Celtics host the Toronto Raptors in a rare Saturday afternoon game as they look to get back in the win column.

Share All sharing options for: Celtics Look to Get Back on Track as they Host Raptors

This is the first regular season meeting between these two Atlantic Division teams and it is the first of 4 meetings this season. The Celtics are 2-2 at home and would like to establish domination at home so they need to start stepping up their game at the Garden. The Raptors are 1-3 on the road.

The Celtics are playing in the first of back to back games and in the 3rd game in 4 days. The Raptors last game was on Tuesday so they come into this one well rested. This is a rare Saturday afternoon game. In past seasons, the Celtics have struggled in early games. Hopefully that trend doesn't continue in this game.

Bass gives up 4 inches to Bargnani but Bass is much stronger and hopefully can keep Bargnani off balance. Bargnani is a good 3 point shooter and so Bass will need to guard him on the perimeter as well as inside.

KG is known to be hard on rookies and hopefully he can rattle the Raptors' rookie center. KG has been playing well and hopefully that will continue in this game.

Rebound - The Celtics have got to crash the boards to prevent second chance points. They are on the way to setting a record for fewest rebounds. I'd love for Doc to play Darko with the second unit instead of always going with small ball. Much of rebounding is effort and desire as evidenced by Courtney Lee's team high 9 rebounds in the last game. The effort they put out on the boards will usually spread to other areas of the game as well.

Defense - The Celtics must make defense a priority in each and every game. They seem to play defense in spurts and in between they allow easy baskets and wide open shots especially on pick and rolls and in transition. They must play strong defense all game. With the Raptors, they must particularly guard the perimeter as they love to shoot from beyond the arc.

Make Free Throws - Down the stretch against the Nets, Paul Pierce and Jason Terry each missed a pair of free throws. Both are usually good free throw shooters and so it may have been a matter of focus. It's usually hard enough for the Celtics to get to the line, they have to make good on the ones they get. 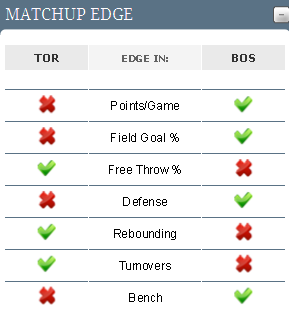 X-Factors
Bench + Rondo The Celtics are playing in the 3rd game in 4 days and are in the midst of a 4 games in 5 days stretch. Doc has done well to limit the starters minutes and the second unit has come through for them. They have to once again come through in this game as Doc will limit the starters with another game tomorrow. The odds of winning definitely increase if Rondo can play.

The Celtics are are 6-4 over their last 10 games with Phillips as a ref. In one Celtics' win last season against Cleveland the Cavs shot 25 free throws to 14 for the Celtics and the refs let the Cavs hack and trip all night with no calls. The ignored Ray Allen being tripped in a one point game down the stretch. One loss last season was game 2 vs the Sixers that he officiated along with Dan Crawford in which KG was called for the offensive foul with 10 seconds left and a chance to win the game. It was Phillips and crew that got Tommy to swear on the air last season about the refs falling for all the blank blank flops.

Over the past 12 seasons, Courtney Kirkland has officiated 725 regular season games and 11 playoff games. He also officiated two seasons in the WNBA, including the 2000 WNBA Championship and the 1999 Conference Finals. Kirkland also officiated the 2010 and 2011 Venezuelan LPB basketball championships. Prior to joining the NBA, Kirkland also worked three seasons in the CBA where he officiated the 1999 and 2000 CBA Finals as well as the 2000 CBA All-Star Game. He was a high school official for four years as a member of the Baton Rouge (La.) Basketball Officials Association and was named Rookie Official of the Year in 1994. Kirkland earned a degree in Computer Science from Southern University. He was a member of the Northwestern High School basketball team that made it to the state semifinals in 1991 and 1992. Kirkland received the school’s Academic award, and led the team in assists, free throw and three-point shooting percentage. The Celtics are 10-0 in their last 10 games that Kirkland officiated. He officiated 2 games last season and both were called evenly.

Poole joined the NBA officiating staff nine years ago and has officiated 467 games. After three seasons in the NBA Development League, where he worked the postseason each year, Poole spent 12 years in the college ranks in the Southeastern Conference, Big East, Atlantic 10, Conference USA, Big 12, Southern Conference, Ohio Valley Conference, and Atlantic Sun Conference. He officiated the NCAA Tournament from 1996 through 2004, including the 2004 NCAA Final Four. While attending Newport News Apprentice School, he received Basketball MVP honors three out of four years.

The Celtics are 7-3 over their last 10 games with Poole as a ref. In his last game with the Celtics last season, along with Bill Kennedy, the refs called a flagrant 1 on Mickael Pietrus, which was a terrible call. They gave the Pacers 2 free throws and the ball plus an additional technical free throw when they protested the bogus call. That call was the difference in the game.

Not to say that the Celtics have dominated the Raptors at the Garden or anything, but if you watch this video, you'll hear the Raptors' announcers talking about how Gino is a regular occurrence when they come to the Garden. Remember that Gino only comes out in a blowout.

Rondo a go as Celtics look to get back on track vs. Raptors