The Celtics and Nets meet for the second time this season in an Atlantic division clash.

This is the second of 4 meetings between these two division rivals. The Nets came out ahead in the first game 102-97 at the new Barclays Center, ending the Celtics 3 game win streak. Rondo was out for that game with a sprained ankle. These two teams split a pair of preseason games with the Nets winning 97-96 at the Garden and the Celtics winning 115-85 in their very first ever trip to the Barclays Center.

The Nets have won 3 in a row, all of which were at home. They have struggled on the road, however, with a 2-3 record away from the Barclays Center. Their two wins came against the Magic and Kings and their losses were against The Warriors, Heat, and Lakers. The Celtics are 4-3 at home and need to make a concerted effort to make the Garden a place teams don't want to come to.

The Nets are coming off an emotional overtime win at home over the Knicks in the battle for New York. The Celtics are also coming off an overtime win as the beat the Magic on the road. One of the stories of this game will be Rondo's assist numbers. If he records 10+ assists in this game, he will be in sole possession of 2nd place, passing John Stockton for the most consecutive games with double digit assists.
The Celtics and Nets meet for the second time this season in an Atlantic division clash. 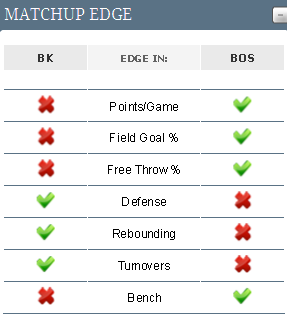 Rondo loves playing against the other top PG's in the league. Rondo missed the first meeting between these two teams and Williams led the Nets with 24 points. Look for Rondo to pass early and often as he looks to keep his assist streak going.

In the first meeting between these two teams, Johnson was 6-17 from the field for 19 points and he hit two huge shots down the stretch to give the Nets the win. JET will have to pick up his defensive intensity to keep Johnson from going off in this game. At the same time, the Celtics will need Jason to find his shot and contribute on the offensive end as well.

Lopez has been playing very well, averaging 19.2 points, 6.5 rebounds, and 2.7 blocks per game. In the first meeting between these two teams he went off for 10 points in the first quarter, getting the Nets off to a quick start. He finished with 24 points. This would be a good time for Jason Collins to see some time to defend Lopez if he starts to go off again in this game. Darko would be nice, but that bridge has been burned.

Bench Play - The Celtics need their reserves to continue to find their chemistry and to produce. The reserves have been big in the past two games but the Nets second unit has been outscoring their counterparts by 10.1 points per game. The Celtics reserves must contribute on both ends of the court if they want to win this game.

Rebound - The Celtics need to crash the boards in order to limit New Jersey's fast break points and second chance points. Bot Reggie Evans and Brook Lopez have been big on the boards this season. The Celtics are still last in the league in rebounding, but they came up big against the Magic, behind Sully and Bass. We need to see a strong effort from every player on the team. When they put out the effort to win the battle of the boards, that often translates to the rest of their game.

The Celtics are playing at home where they have vowed to make it difficult for other teams to play. The Nets have struggled on the road this season, especially against the better teams. The Celtics need to take advantage of this and come out strong and play hard for 48 minutes with the crowd behind them.

The son of former NBA official James Capers Sr., James Capers has officiated 1,015 regular season games and 54 playoff games during his 17-season NBA career. Capers made his first NBA Finals appearance during the 2011-12 season. In addition to his NBA experience, Capers has six years of CBA officiating experience, including three CBA Finals and two CBA All-Star Games. The community-conscious Capers was the recipient of the 1998 Monarch Award as Chicago Sportsman of the Year for his career and community achievements.Capers also conducts NBA Read to Achieve programs at two Chicago Public schools. He has also volunteered to train referees for the Philippines basketball association.

I've seen several posts from Lakers fans who swear he hates the Lakers. At least he has that in his favor. The Celtics last saw Capers in game 2 of the ECF last season. The officiating was terrible in that game. The Heat shot 47 free throws to 29 for the Celtics. Pierce, Dooling and Pietrus all fouled out. There were bad calls and missed calls throughout the game. Lebron James took 24 free throws himself, only 4 less than the entire Celtics team. The Celtics are 7-3 over their last 10 games with Capers. The Nets are 3-7 over their last 10 games. His home W/L record this season is 11-1.

Before becoming an official, Kevin Fehr’s athletic ability landed him in the St. Louis Cardinals’ organization in 1981 and 1982. After his baseball career ended he took up officiating and is now in his 18th NBA season with 993 regular season games of experience. Fehr was also a member of the crews that officiated 2003 NBA All-Star Saturday and the 1999 Mexico Challenge. Fehr spent five years officiating in the CBA and also has seven years of collegiate officiating experience, including games in the Southeastern, Sun Valley and Ohio Valley Conferences. He officiated the SEC and OVC Tournaments. Fehr has high school officiating experience in Alabama, where he worked the State Tournament in 1988 and 1989. Fehr honed his baseball skills at the University of Alabama-Birmingham, where he was the team’s captain, and he received his Bachelor of Science degree in Elementary Education. Later, Fehr wentback to UAB to earn a Masters degree in Elementary Education with a concentration in high school math.

As with Capers, the last time the Celtics saw Fehr, the results weren't good. The Celtics won but the officiating was terrible. It was an April 7 game against the Pacers. Tommy had this to say,"I hope this group of officials doesn't officiate the playoffs. Holy Cow are they terrible!" And a comment from the Pacers boards says it all, "If the Celtics punched these refs out, I wouldn't blame them." The Celtics are 8-2 in their last 10 games with him. The Nets are 3-7 in their last 10 with Fehr on the court. His home W/L record this season is 4-4.

Fitzgerald has officiated 175 games in his three seasons as an NBA official. Fitzgerald started refereeing at the age of 18 at the high school level in New Jersey. Prior to the NBA, he had professional experience in the NBA D-League for four years (2005-2009) and the WNBA for two years (2008 and 2009). He also refereed NCAA Division I basketball in the Ohio Valley, Atlantic Sun and Big South Conferences for two years (2004 - 2006).

You may remember Fitzgerald from two seasons ago when he gave KG a very quick pair of technicals (from about 30 feet away) and tossed him in the 2nd quarter of the Celtics 104-101 win over the Knicks (in which Amare scored 30). In another outing that season with the Celtics, the loss to the Bobcats in Charlotte, he tossed Stephen Jackson after 2 quick questionable T's. His quickness in giving technicals dates back to his days in the D-league where he was close to the top in calling technical fouls there as well.