Rajon Rondo responded aggressively on Wednesday night to a hard foul. He stood up for his teammate, took matters into his own hands and things escalated quickly. As the newly proclaimed leader of the Celtics, though, that reaction has sparked some much needed conversation.

Share All sharing options for: The Fallible Rajon Rondo

He's the infallible leader. The one who led the Boston Celtics to the Finals twice as the point guard of a starting five surrounded by Hall of Fame-caliber players. In the past two years, he's started to take on a new mentality in Boston, one centered around being a leader both in word and in deed.

And he can do no wrong. At least that's what it seems as if we've come to believe. Rajon Rondo, the acerbic point guard whose behavior has always been aberrant, has become the poster child for perfection in Boston. When he's passing up open layups to pad stats, the argument becomes focused on the fact that the all-time greats did it as well. When he lackadaisically allows other point guards to beat him off the dribble and doesn't fight hard over screens on the pick-and-roll, a blind eye is batted.

But after what transpired on Wednesday night in Boston, with the Celtics already losing to the Brooklyn Nets by a large margin, the "do no wrong" mentality needs to be examined. Kevin Garnett was fouled by Kris Humphries as he drove to the basket, Garnett fell to the floor and then things got out of hand. Rondo shoved Humphries, a gesture Kris didn't appreciate, and a glorified seventh-grade cat fight broke out underneath the basket. It spilled over into the stands for a few moments, and when it was all said and done, Rajon Rondo, Gerald Wallace and Kris Humphries were ejected from the game.

Had the reaction taken place two or three years ago, it would have been expected. Rondo would have been painted as the young, immature point guard that just doesn't seem to understand when and how to display his emotions properly. But this isn't 2010. It's 2012, and Rajon Rondo has, by his own admission, taken charge as the leader of the 2012-2013 Boston Celtics.

His task is tall, and likely always will be, as the cast surrounding him is aging and, simply put, hasn't been nearly as good as anticipated at the beginning of the season. But the blind eye being turned to Rondo's every fault cannot happen any longer. Craven behavior like what was displayed in Boston on Wednesday night is exciting and motivating at the surface. His actions surely infused fire into a seemingly emotionless and struggling Boston team, but beneath the surface it counteracted the new image Rondo had worked so very hard to portray this season.

When all is said and done, Rondo will be suspended for a few games. He will be fined, the Celtics will be forced to play a few games with an extremely weird lineup and he'll return and likely jump-start Boston's season again. It's happened before. But allow this to be the moment where Rajon Rondo is finally understood as fallible. He makes mistakes, and his absence will, though for only a few games, hurt the Boston Celtics. Why? Because he's actually playing on another level this season.

Rondo's growth as a leader and a player has taken shape in a number of ways. On the positive side, Rondo has posted his highest true shooting percentage of his career, 55.2. His Player Efficiency Rating (PER) is the highest it has been at any point during his career as well, 21.06. 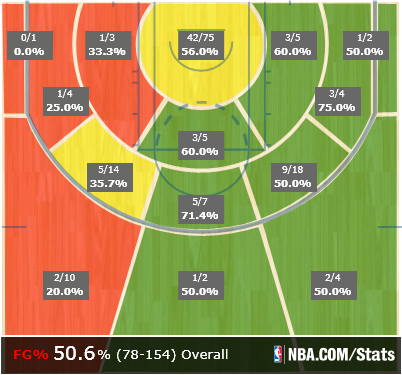 He's finishing at the rim better than he has at any point during his career, 66.1 percent, and he's also shooting extremely well from 16-23 feet and hitting the most three-point shots than at any other point in his career. For a guy who has been painted as a terrible shooter for so long, maybe he's finally shaping that part of his game.

He's been rather exceptional on offense as the pick-and-roll ball handler, averaging .83 points per play and shooting 51.8 percent on shots coming out of those plays, according to MySynergySports.com. Rajon has been even better as a spot-up shooter. So far, though all of these statistics are a product of a small sample size, he has averaged 1.03 points per play in spot-up opportunities, and is shooting 48.4 percent.

He's averaging 13.6 assists per game, a number largely augmented by a couple of 15+ assist games. Still, he's been superb when it comes to getting his teammates open looks. He's turning the ball over at a much lower rate than in years past. But there's more to his game that needs shaping.

As much as Rajon wanted to enter the 2012-2013 season as the overall leader of the Boston Celtics, it's clear that there is still a lot of growing yet to occur. Sure, it's easy to sit from the outside looking in and note that the brawl should have never happened. It's understood that emotions get the best of players sometimes. It happens. But for Rajon Rondo, it cannot happen like it did on Wednesday night. Not as the leader of the team, not as the team's only true point guard, not now, not ever.

In a day and age where simply stepping foot onto the court and coming off the bench during a fight will earn at least a one-game suspension, Rondo simply cannot respond the way he did on Wednesday night. Perhaps a better reaction would have been to exchange words, stare Humphries down, pick Garnett up and walk away. A leader doesn't react before he reads the situation. A proper leader understands the impact his actions could have on his team, both positive and negative.

Those who hold to the old school approach will voice complaints at the way the brawl unfolded. Players got away with far worse than a few shoves and scratches in previous eras. But that was then. As frustrating as it may be, times have changed.

The last time Rondo was suspended it happened because of an immature, bonehead move. He bumped an official during the playoff series against Atlanta and the Celtics were luckily able to win the series despite missing perhaps its most important player for an entire game. Many thought that a new leaf had been turned over this season, that a lesson had been learned. Maybe Wednesday night's reaction will be the catalyst to a newer, mature Rondo.

Whatever the outcome, his actions should be observed without green-colored glasses. I'd want Rajon Rondo on my team during a fight. I'd prefer him on my team as a point guard. But I don't want my leader reacting without thinking. Perhaps it's just another piece to the enigmatic puzzle that is Rajon Rondo. But it has to change if his perception is ever going to be altered outside of Boston.