Celtics search for consistency as they visit the Bucks

The Celtics will try to win 2 in a row as they visit the Bucks without their mercurial point guard.

Share All sharing options for: Celtics search for consistency as they visit the Bucks

The Celtics will try to win 2 in a row as they visit the Bucks without their mercurial point guard. The Celtics lost to the Bucks in their home opener but came back and beat the Bucks in Milwaukee 8 days later. This is the third meeting between these two teams with one more scheduled later this month.

Rondo will be out once again. Doc started Terry at the point and Lee at the 2 guard against the Blazers and that seemed to work out well. . He may go with that starting lineup once again or he may try Barbosa at the point to stay with the speedy Jennings. Whichever players start, all three must pick up their games and play harder, tougher and smarter to help make up for the absence of Rondo.

The Celtics have the pieces to be very good but they just can't seem to put it together. They seem to be getting it together and then they come out totally flat as a team. Hopefully Doc's comments about the team being soft will hit home and each player will dig down deep and find some toughness, along with some consistency, especially on defense and on the glass.

Interesting fact: Larry Sanders had a career-high 10 blocks to go with 10 points and 12 rebounds in the Bucks loss on Friday night. 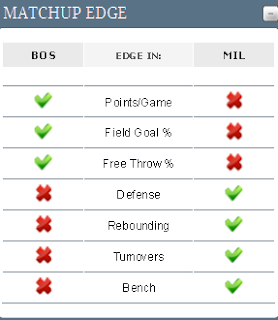 Jennings has been a tough matchup for Rondo and it is even tougher for Terry who isn't used to playing the point. Doc may rotate his shooting guards through the point guard spot if JET struggles. We may even see Doc go back to Barbosa starting to cover the speedy Jennings. Without Rondo, this spot is one big question mark.

Ellis is capable of putting a lot of points on the board and CLee needs to clamp down defensively to try to contain him. Lee defended Ellis well in their first two meetings. Lee has been struggling on the offensive end and trying to find his role on the team. Hopefully he can find his stroke soon along with continuing to play tough defense.

Dalembert scored just 2 points in the first game between these two teams while KG scored 15. In the second meeting KG scored 18 points while Dalembert came up with 14. KG can dominate this matchup if he plays hard and looks to score.

DEFENSE! - The Celtics must tighten up their defense, especially on the pick and roll. They allowed way too many easy points against the Bucks in their home opener. Hopefully we will see the tough defense that we have come to expect from the Celtics, especially after being called soft by their coach two games ago. The Bucks can put up a lot of points and they also defend well so the Celtics must play tough defense if they want to get this win.

Rebound - The Celtics must crash the boards to prevent the Bucks from getting second chance points. Rebounding is all about effort and when the Celtics put out the effort on the boards that effort seems to carry over into all the other areas of their game. Failure to rebound will result in a failure to win. The Celtics were outrebounded 46 to 36 in their first meeting. They were out rebounded 44-40 in the second game. That's one area the team as a whole needs to show more toughness.

Bench Play - The Celtics bench isn't as deep as we once thought it to be. Without Rondo, the Celtics don't have a true playmaker and will be using a rotation of their 3 shooting guards to cover the position. The Celtics must get more from Jeff Green, Chris Wilcox, Leandro Barbosa, and Jared Sullinger.

Play Tough and Be Aggressive - The Celtics came through against the Blazers and were tough, aggressive on defense and aggressive in going to the basket. But we've seen that before and the next game they would go back to being passive on both ends of the court. We need to see this toughness on a more consistent basis.

Toughness and No Rondo

The Celtics showed some toughness and finally played tough defense against the Blazers. Can they do that two games in a row? Can the players pick up their games once again to fill in for Rondo? We shall see.

Marc Davis, an avid outdoorsman, has been an NBA official for the past 15 seasons, working 851 regular season games and 43 playoff games, and the 2007 NBA All-Star Game. Davis officiated his first two Finals games during the 2010- 11 season. In addition to his NBA experience, Davis has three years of CBA officiating experience and three years of collegiate basketball officiating experience in the OVC and TAAC Junior Colleges. In 2000, Davis was the recipient of the Honorary Nate Humphries Award, an honor given by the Chicago Public League Coaches Association in recognition of enshrinement of an official into the Chicago Public League Hall of Fame.

Davis was investigated for threatening to whoop Allen Iverson's a** when AI complained about a call in a game in 2005, but was not suspended for it. The Celtics are 7-3 in their last 10 games with Davis on the court. One loss last season was a 1 point loss to the Cavs in which Davis and friends ignored a very obvious foul committed against Paul Pierce in the final seconds of the game and in which the Cavs shot 20 free throws to 14 for the Celtics. In a win against the Hawks last season with Davis the officiating was terrible. The Hawks shot 23 free throws to 13 for the Celtics. KG fouled out in that game on a terrible call. They were holding his jersey and had an elbow in his back and they called the foul on KG. Stiemsma fouled out shortly after on two more terrible calls. In the 4th quarter, 12 fouls were called on the Celtics and only 4 on the Hawks. In OT, 4 fouls were called on the Celtics while none were called on the Hawks, even through there were several very obvious fouls committed. Donny Marshall usually doesn't comment on the officiating but said that the Celtics needed to send the tape of this game to the league because Davis made it all about him. Davis also called Game 1 of the Hawks series last season. There were missed and bad calls the entire game. At one point, the ref at half court called an obvious foul on the Hawks when Davis, right next to the play, failed to call it. The frustration over the lack of calls boiled over and resulted in Rondo bumping Davis and being ejected. The Bucks are 6-4 in their last 10 games with Davis on the court. His home W/L record is 6-6.

Adams tends to be inconsistent especially on charge/block calls. He is one of Tommy Heinsohn's least favorites. In one game, Tommy went ballistic yelling at the top of his lungs "GO BACK TO YOUR MOMMA BENNIE ADAMS!!!" This is Adam's second game with the Celtics this season and they are 6-4 in their last 10 with Adams on the court. The 4 games he officiated for the Celtics last season were all called fairly even. The game this season was a win over the Wizards where there were a few missed calls but the officiating was good. The Bucks are 5-5 in their last 10 games with Adams. His home team W/L record this season is 9-5.

Haywoode Workman has officiated 209 regular season games in his first four NBA seasons. A second round draft pick by the Atlanta Hawks in 1989, he played professionally for eight seasons in the NBA and overseas betweeen 1989 to 2000. He spent four seasons officiating in the NBA Development League and also officiated in the CBA before joining the NBA. Workman joins Bernie Fryer and Leon Wood on the short list of NBA players who have made the transition to officiating. Workman was an All-State quarterback in North Carolina in 1983 and played in the NC/SC Shrine Bowl. He played one year of football and basketball for the all time winnigest HBCU coach the late Clearence "Big House" Gaines at Winston-Salem State University. He was inducted into the Oral Roberts University Athletics Hall of Fame in 2003.

The Celtics are 6-4 over the last 10 games with Workman, including a loss to Philly in the preseason. There hasn't been a lot of controversy over his officiating. Unlike Davis and Adams, he keeps a low profile. The Bucks are 5-5 in their last 10 with Workman. His home W/L record is 8-2 this season.