The Celtics begin their 3 game road trip in Houston where they take on Linsanity and The Beard.

The Celtics begin their 3 game road trip in Houston where they take Linsanity and The Beard. They also will face old friend and former Celtic, Kevin McHale, who is back on the Rockets bench after missing over a month due to the death of his daughter.

The Rockets are a decent home team with an 8-5 record at the Toyota Center. The Celtics have slipped to 4-5 on the road. Both teams are 6-4 in their last 10 games. The Celtics, who are going for their second 3 game win streak of the season, have climbed past Philly for 3rd in the Atlantic and have the same 12-9 record as the Nets. Both teams are 4 games behind the Knicks. Houston is looking for their second straight win and are 4th in the Southwest division, 7 games behind the Spurs.

The Celtics have a game in San Antonio on Saturday so they need to play smart and save some energy for the Spurs. Hopefully the bench will come through and allow the starters to get some rest.

As Rondo goes, so go the Celtics. The fact that Rondo played over 52 minutes in the Celtics 2OT win over the Mavs shows how important he is on the court. The Celtics simply don't have a replacement for him. The last time Rondo faced Lin in NY, he delighted in shutting him down. I can see him doing the same thing in this game.

James Harden is capable of putting up a lot of points and Jason Terry will need to work extra hard on defense to contain him. At the same time, the Celtics need JET to get his shot back on track as they need his offense.

Asik is a good defender and so KG will have to use his veteran wiles to get his shot off against him. Asik won't put up a ton of points, but he is a double double threat and KG will need to try to keep him off the boards. 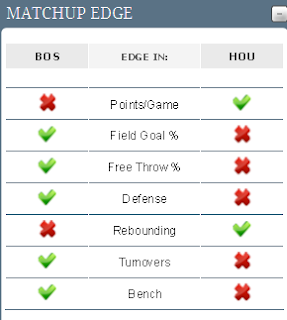 Defense - The Celtics must keep their defensive mindset. Defense wins games and it will win a championship. The Celtics are beginning to come together defensively, and that trend needs to continue as they now need to develop more consistency on that end. They allowed Dallas to score 60 points in the paint. They have to keep the Rockets from getting into the paint to score. Also, the Rockets are 3rd in the league in made threes and so the Celtics must defend on the perimeter as well.

Rebounding - Rebounding is second to defense in importance in winning games. The Celtics need to put out effort to crash the boards and prevent the Rockets second chance points and fast break opportunities which Lin and Harden will take full advantage of. Rebounding is effort and desire and when they Celtics bring the effort on the boards, it spreads to the other areas of their game.

Be Aggressive - Too many times we see the Celtics get beat to loose balls and rebounds. The Celtics have to be aggressive in going after loose balls, grabbing rebounds and taking the ball to the basket. After the double OT game on Wednesday, their legs may tire quicker and if the jumpers aren't falling, they have to get into the paint. The more aggressive team will get more respect from the refs and they also take some steam out of the other team by attacking and being aggressive.

Bench Play - The Celtics need their second unit to come in and contribute on both ends of the court. The starters are going to be tired and they are playing back to back and so the bench will be needed to come through with some quality minutes.

The Celtics are on the road and need to keep their focus in order to win despite travel, hostile crowd and fatigue.

David Jones
Jones has officiated 1,387 regular season games and 45 playoff games throughout his 23 seasons as an NBA official. In addition, Jones officiated both the men’s and women’s 2000 Olympic Bronze Medal Games. Jones has eight years of collegiate officiating experience in the Southeastern, Trans-American Athletic, Metro and Sunshine State Conferences.

He was one of the refs who helped to train Tim Donaghy and was very outspoken in condemning Donaghy's actions and felt that Donaghy's actions took the "ethics and integrity of the profession and threw them out the window." I guess he hasn't looked very hard at the current crop of refs that also lacks ethics and integrity. The Celtics are 0-2 this season and 5-5 in their last 10 games with Jones while the Rockets are 2-0 this season and 7-3 in their last 10 with Jones. Jones' home W/L record this season is 13-5.

Haywoode Workman
Haywoode Workman has officiated 209 regular season games in his first four NBA seasons. A second round draft pick by the Atlanta Hawks in 1989, he played professionally for eight seasons in the NBA and overseas betweeen 1989 to 2000. He spent four seasons officiating in the NBA Development League and also officiated in the CBA before joining the NBA. Workman joins Bernie Fryer and Leon Wood on the short list of NBA players who have made the transition to officiating. Workman was an All-State quarterback in North Carolina in 1983 and played in the NC/SC Shrine Bowl. He played one year of football and basketball for the all time winnigest HBCU coach the late Clearence "Big House" Gaines at Winston-Salem State University. He was inducted into the Oral Roberts University Athletics Hall of Fame in 2003.

The Celtics are 0-2 this season and 5-5 over the last 10 games with Workman, including a loss to Philly in the preseason. There hasn't been a lot of controversy over his officiating. Unlike some of the NBA officials, he keeps a fairly low profile. The Rockets are 1-0 this season and are 6-4 in their last 10 with Workman. His home W/L record is 9-6 this season.