Celtics Host Bucks Looking to Even Up the Series

The Celtics look to stay above .500 as they host the Bucks for their 4th and final meeting in the regular season.

Share All sharing options for: Celtics Host Bucks Looking to Even Up the Series

The Celtics look to stay above .500 as they host the Bucks for their 4th and final meeting in the regular season. The Bucks have won one game on the road and one game at home while the Celtics won one game in Milwaukee and are looking to tie the series at 2 games apiece.

Doc shook things up in the last game by inserting Jason Collins and Jason Terry into the starting lineups. It worked out well against the Cavs with Collins easing some of the pressure on KG and Terry playing better along side of Rondo. I expect him to use the same lineup in this game but then again, you never know.

The Celtics need to continue their dominance at home and keep their momentum going as they begin their road trip. They will have off until Christmas Day with time for rest and practice and so should be able to give a good effort in this game.

Jennings is a good young PG who is working to make a name for himself in the league. Jennings has talked trash in every game against the Celtics. You might even remember him shouting trash at KG as he was heading to the locker room after a game in his rookie year. Rondo should look to make a statement here and win this match up in a big way.

Ellis is capable of putting a lot of points on the board and JET needs to clamp down defensively to try to contain him. Ellis shot just 1-14 in his last game and will try to break out of a mini slump that has him shooting 25.5% in his last 3 games. On the other end, Ellis can be a lazy defender at times and it might open up the court for JET to get some easy shots.

In the last game between these two teams, Larry Sanders had 18 points, 16 rebounds and five blocks off the bench. It's no surprise that he's now in the starting lineup for the Bucks. Assuming that Doc starts the same lineup as in the last game, Collins should help to limit Sanders from getting to the hoop as much. 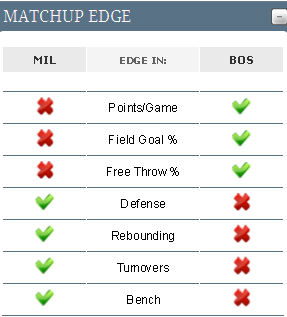 DEFENSE! - The Celtics must tighten up their defense and everyone must play their role in the team defense. The Bucks can put up a lot of points and they also defend well so the Celtics must play tough defense if they want to get this win.

Rebound - The Celtics must crash the boards to prevent the Bucks from getting second chance points. Rebounding is all about effort and when the Celtics put out the effort on the boards that effort seems to carry over into all the other areas of their game. They have to

crash the boards as a team.

Limit Turnovers- The Celtics turn the ball over way too much in spurts. They get a lead and then they get careless and turn the ball over several times in a row. . They lose track of their defender and lose the ball to them. They dribble into traffic and lose the handle. All of this could be fixed with more focus and discipline on the part of each player. The Bucks are 3rd in forcing turnovers, forcing opponents to turn it over 16.8 times a game. The Celtics must take care of the ball.

Bench Play - The Celtics reserves have struggled to find their roles and to be consistent. Jeff Green especially must be more aggressive and play better. That goes for every player on the team as well, but especially the second unit.

The Celtics are playing their final home game before their 4 game road trip that begins on Christmas Day in Brooklyn. They have a 5 game win streak going at home and they should have the motivation to keep that going. Doc has said that they aren't a very good team which should also be motivation for them to pick it up a level.

The Celtics are 7-3 in their last 10 games with Mauer officiating. In 3 games last season he let both teams play and the officiating was good. In one loss to the Hawks last season, 18 fouls were called on the Celtics and 8 on the Hawks and the officiating was terrible. In his last game for the Celtics last season, ECF Game 2 vs the Heat, the Heat shot 47 free throws to 29 for the Celtics. He failed to call a foul on Wade for hitting Rondo in the head on a layup even though he was in position to see it clearly. He also failed to call a foul on Wade for kicking KG who was going up for a layup when he was again the ref in position to do so. He called a questionable clear path foul on Pietrus. Pierce fouled out on a very questionable call, joining Pietrus and Dooling with 6 fouls. LeBron James took 24 free throws himself. The Bucks are 5-5 in the last 10 games with Mauer. It's tough to know which Mauer will show up - the good one that lets them play or the bad one that tries to control the game and make it about himself. His home W/L record this season is 15-6.

Brent Barnaky enters his third NBA season having officiated 101 NBA games. Barnaky came to the NBA with 10 years of collegiate officiating experience in the Southeastern Conference, Big East, Conference USA and other college conferences as well. He completed three years of postseason officiating in the N.I.T. (2008-2010). He officiated the 2008, 2009 and 2010 NBA D-League Playoffs, and the 2009 and 2010 NBA D-League Finals. In the off season, Barnaky gives back to the game, by training and developing other officials at referee camps/clinics. He entered the NBA last season as one of five refs chosen from the D-League to officiate a handful of games the previous season. Prior to his being hired onto the NBA officiating staff, Barnaky was a civil trial lawyer. He continues to remain actively involved with pro bono work to public at large clients in need of legal services.

He has only officiated 9 games for the Celtics previously, 4 wins and 5 losses. He called one game for the Celtics this preseason, the OT loss to NY. In a loss to the Pistons last season that Tommy Heinsohn called the worst officiated game all season, Rondo was ejected and the Pistons shot 46 free throws to 15 for the Celtics. He has called 3 Bucks games, 2 wins and 1 loss. His home W/L record this season is 8-6.

Sean Wright has officiated 406 regular season and nine playoff games in his seven seasons. Prior to joining the NBA, Wright was an official in the NBA Development League, where he participated in the playoffs in 2003-04 and the championship game in 2005. Wright’s collegiate officiating experience includes working in the SEC, Colonial, Big South, Southern, Ohio Valley, Atlantic Sun and Southwestern Athletic Conferences. He participated in the Ohio Valley Conference championship in 2003 and the Men’s NCAA Division II tournament in 2004. He officiated the Eduardo Najera Foundation charity basketball game in 2006 and the Terrell Owens Foundation charity basketball game in 2005.

The Celtics are 0-2 this season and 5-5 in their last 10 with Wright on the court. One win last season was against the Bobcats where they shot a total of 80 free throws between them and they called every little foul all night but called them on both teams. He also called the loss vs Detroit with Barnacky where the Pistons took 46 free throws to just 15 for the Celtics and Tommy Heinsohn called it the worst officiated game of the season. It was Sean Wright that Rondo threw the ball at resulting in his ejection and suspension (which apparently was only suspendable for Rondo since Noah also threw the ball at a ref and got no suspension). And fast forward to this season where Wright was one of the refs in the Celtics opener against the Heat where once again Rondo was called for a flagrant and a technical after he was completely frustrated by the failure of the refs to call multiple fouls by Wade and Battier against him. In the second game this season, a loss to Philly, Tommy called him an idiot after one particularly bad call. The Bucks are 1-0 this season and 8-2 in their last 10 games with Wright. His home W/L record this season is 12-8.