Fab Melo has spent much of his time this season in Maine working with the Boston Celtics D-League affiliate, the Maine Red Claws. On Saturday night, he exploded for his best game of the season.

Share All sharing options for: D-League update: Fab Melo explodes for a triple-double

With all of the Celtics struggles this season, a lot of attention has been placed on the two draft picks not currently in the NBA. Kris Jospeh and Fab Melo have been playing for Boston's D-League affiliate, the Maine Red Claws, for most of the season.

Joseph's performances thus far have led to a number of call-ups to the 'big club' as Maine head coach Mike Taylor calls it, and he continues to spend time between Boston and Maine. Melo has struggled to get himself going consistently, though the numbers he has put up for much his time in Maine have been nothing to make anyone completely distraught.

On Saturday night, Melo broke through in a major way. The Red Claws took on the Erie BayHawks and what transpired on the court for the young big man should only help his confidence as he continues to develop. Melo scored 15 points on 7-of-14 shooting, recorded 16 rebounds (8 of them on the offensive glass, 8 of them on the defensive glass) and blocked 14 shots in nearly 37 minutes of action. Those 14 blocked shots are a NBA Development League record. 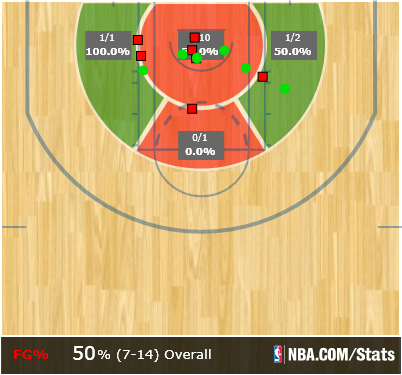 Fab was constantly contesting shots around the rim and appeared to be much more comfortable defensively for Maine than he has in previous games. In his previous five games, Melo had not played more than 26 minutes for the Red Claws. He came into Saturday's game averaging 7.1 points and 5.3 rebounds. Melo's comfort within the team's defense was evident time and time again as he made the proper rotations defensively and worked with fellow Red Claw Chris Wright to keep Erie's Keith Benson and Henry Sims largely at bay.

Perhaps the most encouraging thing about Melo's performance was his activity on the glass. He focused on getting himself in good position on both ends of the floor and, well, did what most people would expect from the tallest player on the court. His ability to pull in just as many offensive rebounds as he did on the defensive glass is great, and hopefully is something he'll continue to work on in the future. He has the size to be a force on the glass in the D-League, and hopefully Saturday evening's game was a glimpse into what the future could hold for Melo.

There's no reason to blow his performance completely out of proportion. If you'll remember, Avery Bradley exploded with Maine during his first season, was called up to Boston and, though his circumstances were a bit different, didn't make a major impact for the Celtics. Time will tell whether or not Fab will get a shot at helping Boston's frontcourt issues, but if he continues to show competency in Maine it should at least deserve some consideration.

Melo has the athleticism to help Boston, if for nothing more than a few minutes per game, and could be a cheap alternative to help ease the rebounding and defensive woes that have plagued the Celtics this season. He still has a ton to learn, but he'll continue to receive attention if he can consistently make an impact on the glass and around the rim like he did on Saturday night.