Round 3 of the battle between the Celtics and Nets

The last game between these two divisional rivals set the stage for this one as it ended with a brawl, technicals, ejections and fines.

Share All sharing options for: Round 3 of the battle between the Celtics and Nets

The Celtics take on divisional rival Brooklyn Nets. Both teams have a new look since the Celtics swept the series last season. The Nets have already beaten the Celtics twice this season both at home and on the road. These two teams will meet once more in April.

Kevin Garnett drove to the basket and was fouled hard by Kris Humphries. Kris gave a little extra shove at the end of the play that didn't sit well with Rondo who quickly rushed to KG's defense. Rondo gave Humphries a shove which resulted in Humphries shoving back and a brawl of sorts broke out along the baseline spilling into the crowd. Rondo somehow lost his jersey along with his double figure assist streak as he was ejected from the game along with Humphries and Gerald Wallace.

These two teams split a pair of preseason games with the Nets winning 97-96 at the Garden and the Celtics winning 115-85 in their very first ever trip to the Barclays Center. The Nets also won twice in the regular season, 102-97 in Boston and 95-83 in Brooklyn.

This is the first game of a 4 game road trip that will take the Celtics through California facing the Clippers, Kings and Warriors after this game vs the Nets. The Celtics are hoping to get Avery Bradley back at some time on the trip, which would give the team a much needed boost. Doc hinted that we might even see him in this game. The Celtics also signed Jarvis Varnado out of the D-League on Monday but it's not clear if he will be with the team for this game or not.

There is plenty of bad blood between these two teams and it may very well get chippy in this game as well. Hopefully the Celtics use that last game as motivation to come out strong and play their best game. The best revenge would be a Celtics win. 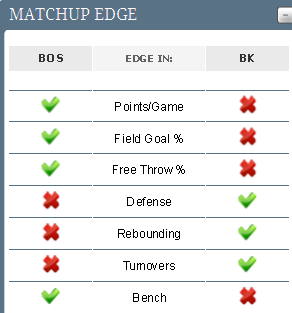 Rondo loves playing against the other top PG's in the league. He also loves national TV games. Expect a big game from him as this game has both and he'll be at his best.

Jason Terry has been praised by Doc for his defense this season and he's going to have to play defense as he faces Joe Johnson, who is capable of putting points on the board in a hurry. On the other side, Johnson hasn't been a lock down defender and hopefully Jet will snap out of the slump he was in last game and should be able to get his points. (But, I'm hoping to see Avery at this spot today.)

Lopez is playing very well this season averaging 17.7 ppg, 6.9 rpg, and 2.4 bpg. In his last game, he scored 16 points with a team-high 10 rebounds. Collins defense will be much needed in this game.

Defense - The Celtics need to tighten up their defense, especially in transition and on the pick and roll. It is their defense that is going to set them apart from the rest of the league and so far this season, it has been very lax.

Bench Play - The Celtics need their reserves to find their chemistry and to produce. The Celtics starters can't carry the team every night and still be fresh at the end of the game. With Chris Wilcox, and Leandro Barbosa out, the bench will be thin, but players like Brandon Bass, Jared Sullinger, and especially Courtney Lee and Jeff Green must produce.

Rebound - The Celtics need to crash the boards in order to limit New Jersey's fast break points and second chance points. When they put out the effort to win the battle of the boards, that often translates to the rest of their game.

Be Aggressive - The Celtics have got to be the more aggressive team. They have to drive to the basket and not settle for jumpers, especially when the jumpers aren't falling. They must be aggressive on the boards and in going after loose balls. Too often we see the opposing team hustling for loose balls and rebounds while the Celtics look rooted to the floor. They can't be passive and expect to win the game.

On the Road and Avery

The Celtics are once again on the road and the last road trip didn't go very well. We can only hope that this one goes a bit better and that they can start it with a win. Also, getting Avery Bradley back for this game would be a huge boost to the team. But we won't know until game time if he will be able to play or not.

A veteran of 22 NBA seasons, Mike Callahan has officiated 1,315 regular season, 122 playoff and 12 NBA Finals games. He was a member of the crews that officiated the 2007 NBA All-Star Game, 1994 Mexico Challenge and the 1996 Schick Rookie Game. Prior to joining the NBA, Callahan spent three years officiating in the CBA, including the 1989 and 1990 CBA Finals. A member of the Cardinal O’Hara High School basketball team for four years, Callahan also coached the freshman basketball team after graduating. Callahan has run a clinic for referees called “Hoops4Heros” that benefits local fire departments and maintains strong ties to the Philadelphia community through his volunteer work with the Don Guanella School for developmentally disabled boys.

The Celtics are 1-1 this season and 7-3 over their last 10 games with Callahan officiating. He was one of the refs who officiated Game 7 of the ECF last season. He also called an 88-79 loss to Philly in the preseason. In the win over the Jazz Callahan's officiating inspired a classic rant by Tommy about an especially bad traveling call he made on Jeff Green. The Nets are 0-1 this season and 3-7 over their last 10 with Callahan on the court. He usually lets the teams play and isn't a tyrant with the whistle but still makes some head scratching calls from time to time. His home W/L record this season is 14-7.

The Celtics are 1-0 this season and have a 9-1 record in their last 10 games with Richardson as a referee. The last game he officiated last season for the Celtics was an OT win over Atlanta that was horribly officiated. KG fouled out on a terrible call where the Hawks were holding his jersey and elbowing him in the back and they called the offensive foul on KG. Stiemsma also fouled out with the 5th and 6th fouls coming within seconds of each other and were terrible calls. 12 fouls were called on the Celtics in the 4th quarter to just 4 on the Hawks. In OT they called 4 fouls on the Celtics and none on the Hawks. In an uncharacteristic show of emotion from Danny, he said after the game that he would be sending the tape of the game to the league office because the officiating was so bad. In the win over the Blazers this season, Portland shot 37 free throws to just 20 for the Celtics. The Nets are 3-7 in their last 10 with Richardson. His home W/L record this season is 13-10.

Zach Zarba has officiated 559 regular season NBA games and 17 Playoff games during his nine-year career. Prior to joining the NBA, Zarba officiated in the NBA Development League for two years, where he was part of the crew that officiated the 2003 D-League Finals. He also spent one year officiating in the CBA and two years officiating in the IBL. Zarba has three years of collegiate officiating experience in the ACC, SEC, Colonial, ASUN, OVC and NEC Conferences. In addition, he has three years of high school officiating experience in New York. While at New Paltz, Zarba was a member of the basketball team and was named captain his senior season.