The Boston Celtics are on the West Coast for three games against Western Conference teams. As Jared Sullinger continues to show marked improvement, the Celtics have a chance to find themselves and settle in as a team before the return of Avery Bradley in January.

Christmas Day has come and gone, and the Celtics managed to give its fans the kind present of a convincing victory. Boston knocked off the Nets 91-76 in Brooklyn and did so in a way that left fans encouraged and hopeful as the Celtics travel out west to play three games against Western Conference opponents.

The Celtics managed to do a number of things well on Christmas Day, showing some improvements on the glass from an unexpected player. Rookie Jared Sullinger was huge for Boston, scoring 16 points on 6-of-7 shooting, pulling down seven rebounds and posting a game-high +/- of +21. His scoring came off of two cuts to the basket, three spot-ups (two jumpers, one hook shot) a post-up and one basket in transition.

Let's take a look at one of his plays on offense. 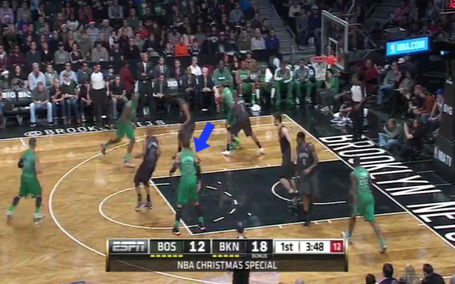 Here, Jeff Green gets the ball to Rajon Rondo who is working out of the post on C.J. Watson. Rondo takes the ball and Green quickly clears that side of the floor by going directly underneath the basket. As Green clears out, Sullinger moves closer to the basket. 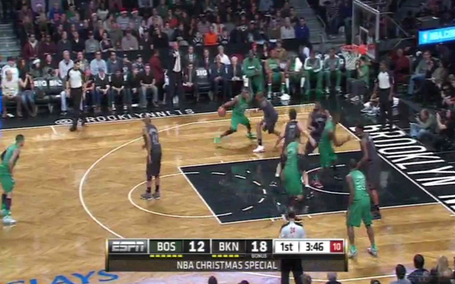 Rondo turns around, puts the ball on the floor and makes a quick move past Watson into the middle of the painted area. 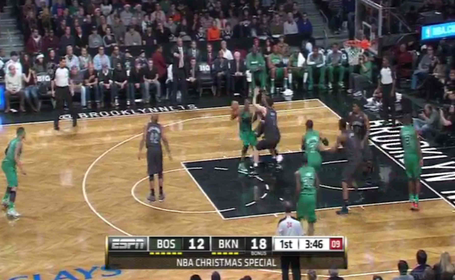 Lopez elects to double Rondo hard and leave Joe Johnson and Andray Blatche to help out on Sullinger. 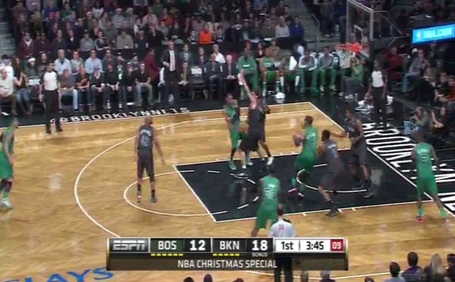 Sullinger cuts hard to the basket, forcing Blatche to either abandon Brandon Bass or help out on Sullinger. Blatche is already behind him, his best option being perhaps to foul or contest the shot from behind. He elects to leave him, and trail back towards Bass. Rondo, gets the ball to Sullinger who is in perfect position to put it up.

The result is two points.

Was this an example of Sullinger just doing what he should have done? Sure. However, it's also indicative of how much more he has developed as a player since we first saw him in the preseason. He's catching on to where he's supposed to be on both offense and defense, and he's making a difference.

More confidence on offense from Sullinger will go a very long way in Boston's quest to string together a good month of January and get itself back in the thick of things in the Eastern Conference. But perhaps the most encouraging thing out of the Christmas Day victory against Brooklyn wasn't the fact that Jared was able to make an impact scoring.

Instead, he was able to pull in some impressive boards. He's always had a knack for using his body properly down low, but as he's grown this season he's become more and more assertive and dominant as a rebounder. The Celtics are surely hoping that trend will continue.

This potential development with Sullinger, while many expected it to happen eventually, is important for Boston as it begins a three-game trip against the Clippers, Warriors and Kings. Boston has struggled to find any sort of consistency with its frontcourt rotation. Jason Collins is the starting center for the time being, and that should tell anyone with knowledge of the NBA all you need to know about Boston's frontcourt struggles.

Jarvis Varnado was signed recently from the NBA Development League, but the inability to hold many (if any) practices on the road trip will likely keep him out of significant playing time until he can learn the defensive system and where he needs to be on the offensive side of the floor. Of course, with Chris Wilcox out for around a month, Doc Rivers could choose to play Jarvis and indoctrinate him via game experience.

All of that to say, Sullinger's increased confidence with whatever unit he's told to play with is a positive for Boston going forward, especially as it looks to return to the type of defensive intensity it showed last season with Avery Bradley as an asset defending on the perimeter.

Bradley is slated to return on January 2nd when the Celtics face the Grizzlies in Boston. A positive three-game swing will do nothing but help augment Bradley's impact on both ends of the floor when he returns. Avery has essentially been lauded as the savior of Boston's struggles and, while he won't solve Boston's rebounding and size problems, he will definitely make an impact defensively.

His return will provide Boston with the ability to let Rajon Rondo defend differently than he does without Bradley on the floor. Bradley's prowess as a perimeter defender should provide the opportunity for Boston to match up effectively against just about any point guard or shooting guard it might face.

Boston's record sits at 14-13 heading into Thursday's game against the Clippers, with the opportunity to be four games over .500 when Bradley returns. For all of Boston's faults and struggles this season, the improvements defensively over the last few games are encouraging as the Celtics prepare to welcome back an important player like Avery.

If the Celtics can take advantage of the opportunities it will face on this road trip and continue to jell as a unit, things could begin turning around more quickly than most people anticipated. The Celtics are improving, slowly but surely, and hopefully they'll continue to display their improvements beginning on Thursday night against the Clippers.